Home Blogs Rory Storm and the Hurricanes – a retrospective… 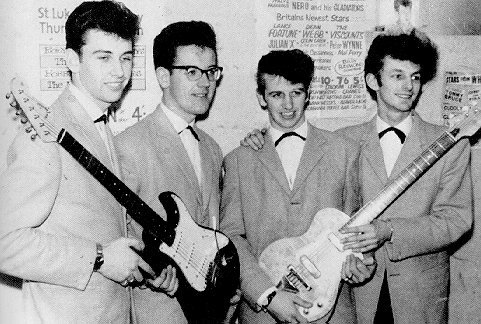 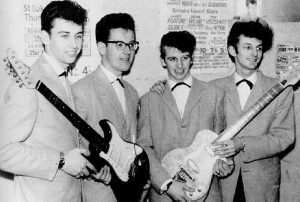 This August it will be 50 years since The Beatles completed their line-up when Ringo Starr joined the band, LTW takes a timely look back at the band he left to join the fabs, Rory Storm and the Hurricanes

There was a time when Liverpool and popular music didn’t always go hand in hand. In 1958 Rock’n’ Roll was still in its infancy when one of its leading lights Buddy Holly brought civilisation to the masses; when he played Liverpool Philharmonic little could anyone have realised that in the suburbs of this very city rock n roll bands were springing up all over, 15 year old George Harrison had just become a fully paid up member of one such group called The Quarrymen. But if you were a betting man given a dead cert that one of these Liverpool bands in the next decade would top most if not all of what had gone before in popular music you may have put the smart money on the band George Harrison had tried to join first – not the embryonic Beatles but Liverpool’s top group; Rory Storm and the Hurricanes. 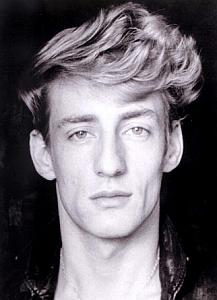 By 1959 19 year old Alan Caldwell had fronted several different groups with different names and ever changing line-ups but now the group was settled Rory Storm and the Hurricanes comprised Alan Caldwell on vocals this tall, athletic fair haired and quiffed front man was a handsome focal point to the many females in the audience, now re- Christened Rory Storm there were no half measures in his quest for fame he was to change his name to Rory Storm by deed poll the family home in Broadgreen, Liverpool was changed to “Stormsville”, he looked and behaved every inch the star driving his very own pink automobile. The Hurricanes were also to undergo name changes under the Western loving eye of Rory. Rory’s long time guitarist in the band and fellow Broadgreen resident Johnny Byrne now became Johnny Guitar described by a proud Ringo Starr on that infamous Jonathon Ross appearance as Liverpool’s own Jimmy Hendrix praise indeed from a man who knew them both. Guitar provided solid Rock n Roll backing to Rory with some stunning guitar work (I have to say that as I’m married to his Cousin) he would remain with Storm for a decade and be present at that infamous poaching of his drummer by John Lennon and Paul McCartney. On lead guitar was Charles O’Brien re-christened Ty O’Brien, a great guitarist who would collapse on stage in the Hurricanes cause and be dead at just 26 years of age. Bass guitarist Wally Eymond would be re christened Lou Walters the first of all the Liverpool musicians to have an electric bass, and on drums the Dingles own Richard Starkey now called Ringo Starr.

The Hurricanes played numerous gigs in Liverpool developing into a tight professional outfit, there was a massive fan base to be tapped into as can be highlighted by other famous Rock n Roll stars such as Eddie Cochran and Gene Vincent following on the heels of the recently deceased Buddy Holly and playing Liverpool this time gracing the Empire, this gig and the Liverpool crowd didn’t go unnoticed by British Rock n Roll stable head Larry Parnes seeing the potential in the Liverpool audience he and Liverpool based Alan Williams hatched a plan for Cochran and Vincent to play the 6,000 seater Liverpool Stadium. These plans looked doomed when a car crash killed Cochran and left Vincent injured. The Liverpool Stadium gig went ahead as planned in May 1960, Gene Vincent headlined but faith was put into local Liverpool bands with Rory Storm and the Hurricanes and Gerry and the Pacemakers flying the local flag, making the night a success and demonstrating that local bands could well and truly hold their own.

Parnes and Williams quickly realised that Liverpool bands could do a very good job so when the Hurricanes passed on the opportunity to support Billy Fury, an old school mate of Ringo’s, the job was given to the newly named Silver Beatles although it was now support to Johnny Gentle a lesser Parnes act. That Scottish tour not only honed the talents of the Silver Beatles it also provided the Ramones with their name in honour of McCartney’s Scottish stage name Paul Ramon. The Hurricanes also passed on Alan Williams offer to go to Hamburg, there was no need they had just secured Summer playing at Butlin’s, Pwllheli the money was so good it even convinced Ringo that he could give up his day job. Williams sent another Liverpool group Derry And The Seniors to Hamburg quickly followed by The Beatles. On the face of it the Hurricanes got the better deal certainly the more lucrative but they were perhaps playing it safe providing family entertainment whereas the Beatles were on a very steep learning curve pleasing Hamburg gangsters and drunken unpredictable sailors.

In this same month music history was to take place although it is not widely known. Hurricanes bassist Lou Walters wanted to cut some tracks in the recording studio three songs were laid down in Hamburg “Summertime”, “Fever” and “September Song” but it is the musicians Lou used to back him for this session which is worth noting, for the first time ever together in the recording studio were John, Paul, George and Ringo! Pete Best was buying drum sticks in Hamburg Stu Sutcliffe was elsewhere and why no other Hurricane bar Ringo was present remains a mystery as does sadly the whereabouts of the four discs that were cut that day.

By the time the Beatles returned to Liverpool in December of that year and played Litherland Town Hall and the first screams of Beatlemania began it was clear that the balance of power was changing and the Beatles were now the top band in Liverpool. 1961 would be a momentous year for The Beatles constant work and more importantly Brian Epstein coming into the picture and presenting them well. Without an Epstein the Hurricanes were more or less self sufficient the work remained plentiful with more work at Butlin’s taking place but each time they were away from Liverpool numerous other bands were keen to take their place in the minds of the local audiences.

Ringo was clearly getting itchy feet as a Hurricane and returned to Hamburg to back Tony Sheridan on his return to the Hurricane fold he even sat in for an absent Pete Best as the Beatles drummer in February 1962. The Beatles remained in the ascendency and in June of that year had a successful recording audition for Parlophone they were now on the EMI roster. The Hurricanes at that time were back playing at Butlin’s Ringo was clearly ready to jump ship after been offered Ã‚Â£20 a week to join Kingsize Taylor then one morning in August 1962 there was a knock at Johnny Guitar and Ringo Starr’s door, John Lennon and Paul McCartney were there with an offer for Ringo to join the Beatles for Ã‚Â£25 a week, that extra Ã‚Â£5 sealed the deal Ringo Starr became a Beatle and Pete Best became the unluckiest man in the history of music.

The Beatles continued on to the “topermost of the popermost” Epstein took Gerry and the Pacemakers and several Liverpool bands along with them and also a Liverpool singer Cilla Black who had started her career been backed by the Hurricanes but no help was offered to Rory and his band there were other members that came into the Hurricane fold after Ringo left but is was that line-up of Rory, Johnny, Lou, Ty and Ringo that had really whetted the appetite. The Record execs ignored the Hurricanes apart from a 1963 poor recording of “Dr Feelgood” perhaps wanting to shift the power base back to London as quickly as possible. 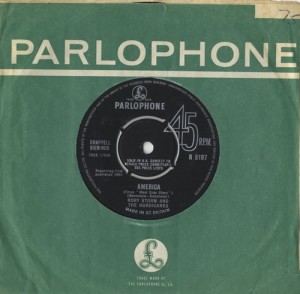 In 1964 Epstein finally offered some assistance to the Hurricanes and produced their single “America” complete with references to the Beatles it failed to chart and the chance for fame finally seemed to have passed them by.

During 1967 and the Summer of Love the Hurricanes still playing Liverpool were to suffer tragedy when their guitarist Ty O’Brien collapsed on stage he was to later die due to complications with Appendicitis he was only 26.

Although an attempt was made to carry on as a group the game was now up, Johnny Guitar became an ambulance man and Rory, a man with a pronounced stutter became a DJ in an Amsterdam club. In 1972 on his father’s death Rory returned to Liverpool to “Stormsville” to be with his mother Vi beloved by the Beatles. Rory and mother were to be found dead beside each other – the belief was that Rory had died of natural causes and his mother on discovering this had committed suicide. The true facts will never be known – very sad circumstances finally brought the curtain down on Rory Storm and the Hurricanes.

So why did fame allude Rory and his Hurricanes? On the face of it maybe it was just that the other groups were progressing, the other Liverpool groups image changed into the Beatle MerseyBeat look and sound. The set list for Rory didn’t drastically change over the years certainly the songs were all covers but the Beatles even though they had written many of their own songs still had set lists of covers in 1962, but it was the fact that they did write their own songs and were not going to be dependent on any middle aged songwriter coming up with songs for them set them apart from the rest they had the DNA to evolve and nothing was impossible.

The story of Rory Storm and the Hurricanes still remains largely untold but for a feel of that time check out the 1973 film “That’ll be the Day” a film clearly inspired by Rory and his Hurricanes, not only with the fact Ringo Starr is the lead in his most successful acting role and looking like Hurricane Ringo rather than Beatle Ringo, but with fellow Liverpudlian Billy Fury playing the role of “Stormy Tempest”. David Essex on his road to Rock n Roll fame along with cameos from Keith Moon, the difference between Rory Storm and this film and its follow up “Stardust” is David Essex does become a fully fledged Rock n Roll star, what a shame the same could not be said for Rory Storm he had the looks, he had the voice, he had the attitude he lived the life but in the end fame and fortune was frustratingly just out of reach.