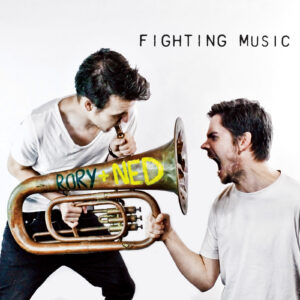 The debut album from Rory & Ned, who despite the name are actually a three piece; drummer Sam Downes seemingly only fit for credit on the inside cover of the ‘Fighting Music’ album – a more appropriate title couldn’t have been dreamt up.

Apparently the tale regarding Rory & Ned is that they formed just over two years ago, they began life as an acoustic duo, performing low-key dates in and around the tranquil town of Ipswich, which as far as I can gather has previously only ever connected with rock ‘n’ roll via The Adicts, and Dani from Cradle Of Filth; Nik Kershaw grew up there…but that’s hardly rock ‘n’ roll! I’m told they both then sought a suitable university to pursue their education, coupling this with their declared aim to become rock and roll stars, they put a pin in a map and moved to Liverpool coupled with a three-year plan to achieve world domination.

Initial reaction however was less than enthusiastic; in response they recruited local drummer Sam Downes, who added some much need rhythm to their own brand of anti-folk; the result being one of the most potent and incendiary releases in many a long year; this isn’t folk, this is some of the most deranged blues ever captured on record, and coupled with their high octane live performance demonstrates just why these pretty boys are building themselves an enviable reputation across the UK.

Opening with ‘Outside and Work’ a ramped up blues rooted head rush, distorted guitars screaming in complaint, crashing cymbals and a barely intelligible twin pronged vocal assault, everything is recorded and mixed at insane levels which merely heightens the tension as that taut repetitive guitar riff batters its way into your soul, thankfully things calm somewhat for ‘Man Slag’ a simple guitar refrain overlaid with old timey blues hollers, before the whole thing clatters down a flight of stairs leaving Rory & Ned whimpering at the base; Clearly they had recovered sufficiently to hurtle through ‘Whoopsie Daisy’ – I’m guessing these boys are referring to the sexual act as opposed to acknowledgement of a minor accident or blunder, a rubbery bass and a pummelling bump-and-grind drum beat; this is so primitive – one foot in the Neolithic period the other treading the mud flats of the deep South.

‘A Forbidden Place’ opens with a stripped down riff Bryan Gregory would have been proud of before morphing into minimal, but utterly shredded guitar and vocal caterwauler, at times the vocals are so high in the mix they actually trip over themselves; ‘China Woman’ is a stand out track amongst an album of outstanding vigorous rock & roll “well its Roooory & Ned” they holler self-mythologizing in this incendiary homage to garage rock, blues, and punk.

‘Fighting Music’ despite the tender age of its originators is a lesson in dirty filthy garage rock at its finest – listening to ‘Fighting Music’ is a cathartic experience; the album is raw, basic yet melodic; Rory & Ned sound so fresh, so damn urgent – the roots of their music maybe the DNA of rock ‘n’ roll but this is their own modern interpretation – simple, raw, and brilliant. On the basis of this inflammable debut Ipswich may yet be forced to re-write its cultural credentials.