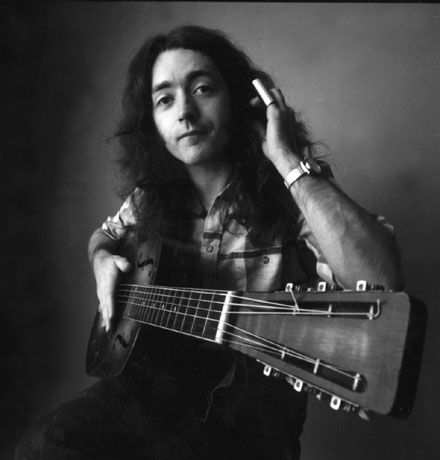 Rory Gallagher came out of Ireland at the back end of the sixties with his band Taste playing some amazing raw blues guitar playing. Look at the YouTube clips now and you see a fresh faced teenage guitar prodigy. His influence has been immense and he is well worth a listen if you don’t know his stuff.

Rory Gallagher was a musician like no other. He was, and still is, one of the world’s greatest guitarists, singer/songwriters and live showmen. His guitar playing is an inspiration to some of today’s hottest guitarists including Slash, Joe Bonamassa, Brian May, Johnny Marr, and The Edge.

“The man who changed my musical life was Rory Gallagher, I picked up a guitar because of him.”Â ”â€œ Johnny Marr

Each of the six milestone albums were released during Rory’s most prolific years (1971-74), when he recorded and produced them in the short space of three years.  The albums are re-released indigipack form, with newly restored original cover art. The audio has been re-mastered from the original Ã‚Â¼”Â inch tapes, true to how Rory intended it to sound.  Each album includes exclusive sleeve notes personally written by Rory’s brother and former tour manager “Donal Gallagher”Â, journalist “Roy Hollingworth”Â, and legendary rock photographer “Mick Rock”Â.