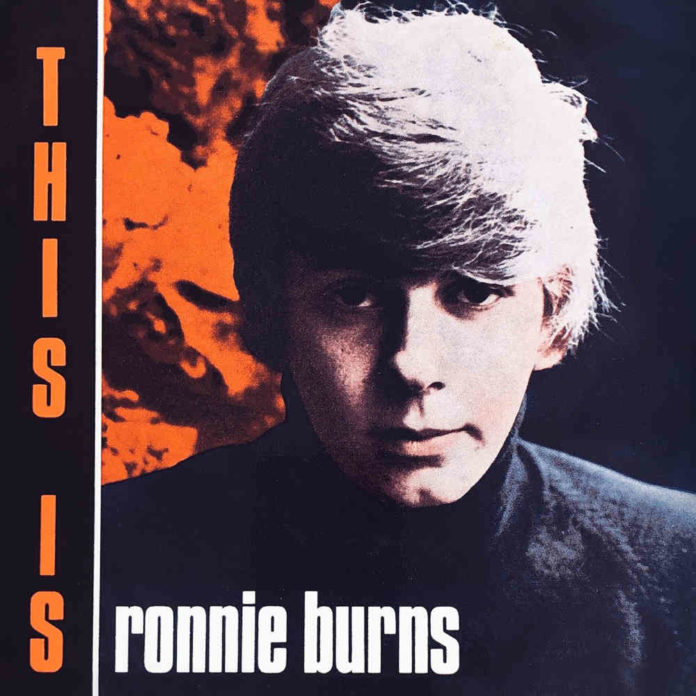 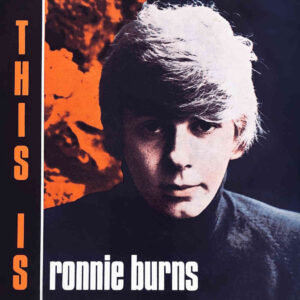 Compilation of the works of Antipodean 60s pop sensation Burns, who enjoyed the patronage of the Bee Gees prior to their return to the UK. This new set includes all of his Australian chart hits and The Flies’ club favourite Doin’ The Mod. Ian Canty listens to some chilled Psych Pop by the man voted Australia’s favourite singer of 1967

Music ran in Melbourne native Ronnie Burns’ family (noses did in ours, copyright Les Dawson). His mother was a stage performer and elder brother played the drums. So it was perhaps natural that Young Ron, who got his first guitar at the age of eight with money saved from his paper round, followed their lead. Rock & Roll fired his imagination and his first big break came when he joined a bunch of roughnecks The Flies, who like many others had been inspired by the Beatles and the UK pop explosion that they had kicked off. Burns had already been fired from a job at the Myer department store for having his hair too long, so he fitted in straight away.

Three singles that were local hits and a tour supporting the Rolling Stones were high spots for the band. But in 1965 a schism developed in the Flies, with the half the band preferring the rough “bad boy” thing their tour-mates the Stones had pioneered, whereas Ronnie and drummer Hank Wallis favoured a more pop approach. This inevitably led to Burns going solo, where he employed a much lighter approach than his work with the Flies. Though not an instant success, he slowly became a fixture in the national charts.

A big help for Burns during that time came from the Bee Gees, who were then based in Australia. They supplied Ronnie with some hit material after his first two singles, covers of Peter, Paul And Mary’s Very Last Day and Bruce Welsh number True True Lovin’ (which utilised some nice freaky guitar), dithered outside of the Top 40. His breakthrough hit was the Gibb-penned nonsense song Coalman, which saw him safely into the Australian Top Ten. It is the first offering here and a good indication of what is to come on this collection – pure 60s catchy pop with orchestral touches, in the mode of the Hollies, Searchers and his pals the Gibbs.

The following Exit Stage Right is a real beaut, near Freakbeat dirty guitar wedded to a dreamy hook. To the other extreme the chamber pop of When I Was Six Years Old really nudges very close to Easy Listening, especially with the kiddie chorus, which gives it a slight case of the Grocer Jacks. There’s early signs of his folk tendencies with In The Morning and Butterfly, but I’ll Know What To Do is a nice bit of snappy mod pop with an ear-catching “radio” vocal effect.

If Piccadilly Pages nears popsike parody and Harry The Happy Hooligan might give one a mental image of Ray Davies pretending to be Benny Hill, he can always pull out something as great as One Bad Thing. It’s full of neat little musical touches and with a real spring in its step, a winner of a tune. Sunshine is a lovely orchestral psych piece and the big hit Smiley’s chilled strings and trilling flutes masked a socially-aware lyric concerning the Vietnam War and fellow pop star Normie Rowe, who had been conscripted to fight in it. 1970 The Prophet used sitar and Eastern influences, probably a good three years after they were deemed passé, but it is still a quite nice post psych pop tune to hear in the present day.

I suppose the question here is why didn’t Ronnie’s chart success in his home country cross over internationally? Well everything in the Burns set up was primed, with access to the Bee Gees’ and Johnny Young’s song writing smarts, good studios and session players right up to orchestras on hand. But if I was being ultra-critical Burns’ voice may not have been quite distinctive enough to make a mark in the US and UK, where they already had people churning out cute pysch pop of the same kind en masse. Not writing his own material may have had an effect too, plus geographical realities which meant if you weren’t based in London or one of America’s main music cities, it was extra tough to make a breakthrough.

Which is not to take anything away from Ronnie’s abilities when furnished with good material. He specialised in lightly trippy beat/folk/psych pop, the kind that was easy-going enough to fit in on TV/radio, pretty easy on the ear and near-MOR at times. It really isn’t that much of a surprise that he eventually moved more towards light entertainment, mainly retiring from live performance in 2000. Being known as one of pop’s good guys, Burns launched the Appin Hall Children’s Foundation with his wife Maggie Stewart, to help disadvantaged children. For this work he was given the Member of the Order of Australia in 2013.

This Is Ronnie Burns is a good collection of (mostly) big production 60s pop, if a little uneven in places. The timeline is all over the place. I suppose they wanted to start things off with one of the big hits in Coalman, but moving things constantly backwards and forwards a year or two afterwards doesn’t do it any favours or give one any feeling of progression.

A minor quibble really, but it would be nice to have started with the Flies’ cool dancer Doin’ The Mod (rather than ending with it) and worked our way logically forward from that. However we do get some fine 60s pop along the meandering way, with the Bee Gees material and his later Johnny Young singles still sounding good. Ronnie Burns was a big home-grown star in 60s Australia and on the evidence here, it is a pity that didn’t translate into some intercontinental success too.