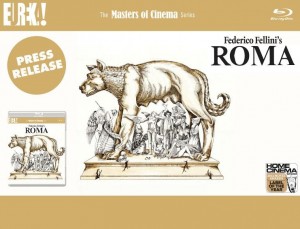 Eureka! Entertainment recently re-released Roma, one of the landmark films in the history of ’70s art-film, directed by Federico Fellini. It’s part of their award-winning The Masters of Cinema Series. Louder Than War’s Ryan Gumbley reviews it for Louder Than War.

Fellini’s Roma is the city and its people through the director’s eyes. He tracks the evolution of Rome between the 1940s and the (at the time) present, 1972 – while keeping its ancient, eternal and ever present characteristics and institutions firmly in shot. The film is semi-autobiographical, the 40s segments feature a young Federico Fellini (played by Peter Gonzales) who is leaving his hometown of Rimini and heading for Rome; in the present day we follow the making of a movie which is taking place in Italy’s capital. The focus is never on any one character for very long though, it would be misleading to call Roma a biopic or a self-portrait because the man himself is reduced to a bit part. The only real character here – and the only one to experience any character development – is Rome, or rather Fellini’s Rome.

Its loosely linked sequences are often observed from within a crowd or audience. During one long scene the camera sits among the punters in a theatre where a variety show is taking place; the piano player exchanges insults with a heckler without missing a note before a dead cat is thrown at a Fred Astaire tribute act. The real intrigue here lies not on the stage but in the stalls – for both the characters and Fellini. Another elaborate set piece takes place outside a Roman restaurant where the young Fellini is eating for the first time with his new neighbours: “Don’t eat so fast or you’ll choke to death!” a mother tells her daughter before shovelling pasta into her own hypocritical mouth. This focus on community and people coming together takes place largely in the 40s-set segments of the film; back in the 70s modern alienation is emphasised by the absence of community and instead a world in which people insularly inhabit their cars and vehicles is presented.

Fellini doesn’t exclude himself from this though. Travelling in his car he directs a film crew (complete with crane) driving alongside him on Rome’s Grande Raccordo Anulare (which roughly translates as “great ring road”). The road circles the city like, as Fellini puts it, “one of Saturn’s rings”: waifs, strays and prostitutes inhabit its edges, fires burn inexplicably and as the rain hammers down more violently the road becomes river. It’s a truly hellish descent, the smoke grows thicker until – before you even realised its change – day is night. It seems to be the director’s vision of an almighty mechanical nightmare; by the end of the scene the ring road has somehow become the stage of a socialist demonstration and the camera pulls away, the sea of static cars in the night framed beside Rome’s unshakable Colosseum.

In Roma everything is moving and changing, not least of all the director’s camera which moves through the film’s extended scenes like a guest at the party, catching brief exchanges and glimpses of conversation before moving onto the next distraction.  The city is vast, and the only way Fellini seems able to comprehend it is through his own very personal, sometimes nostalgic and always extravagant prism of subjectivity. The deconstruction of Roman Catholicism by way of an ecclesiastical fashion show for instance, is inspired. Nuns, cardinals and priests stride (and occasionally rollerblade) down the runway wearing the most extravagantly designed costumed imaginable; the light-hearted beginnings eventually give way to a more sinister and cultish ritual of worship as images of death and ghouls enter the parade. The Church is presented to us as alluring, frightening and utterly vacuous – his conflicted feelings with regard to Catholicism are perhaps best embodied in this single scene.

Aside from its reputation as a masterpiece from the mind of Fellini, Roma is significant also in that it was to feature the final screen appearance of the indomitable Anna Magnani. She plays herself in a brief cameo in which, via a voiceover, Fellini declares her a “symbol of the city itself … she-wolf and vestal virgin, noblewoman and fishwife”. It’s perhaps fitting then, having already starred in Roberto Rossellini’s Rome, Open City (1945) and Pier Paulo Pasolini’s Mamma Roma (1962) that one of the greatest actors Rome and Italy has ever produced bowed out in Federico Fellini’s uniquely reconstructed Roma.

Roma can be bought on Amazon here.

All words by Ryan Gumbley. More work by Ryan on Louder Than War can be found here.