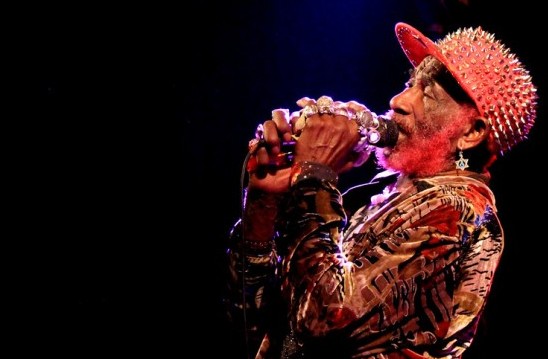 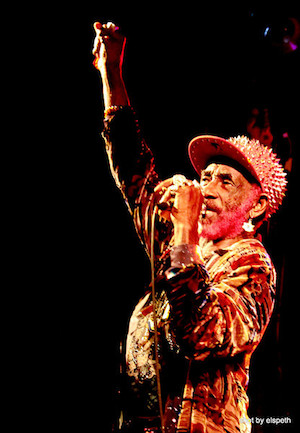 Last week we ran an interview with Rolo McGinty of The Woodentops. During it he was asked about the day he met Lee Scratch Perry and his reply suggested there was an interesting story hidden in there, so we asked him if he fancied writing us a guest blog about it. Rolo’s reply was in the affirmative so read on to find out about the day The Woodentops met Lee Scratch Perry. (Photo © Elspeth Moore.)

We were holed up in Roundhouse studios, Chalk Farm, for a month or so. In fact, we’d just had an Atari nightmare and had decamped to my music room to sort out the problems and to return when ready. Our co-producer, Scott Litt, was under pressure to deliver and we were behind in the calendar design. All kinds of drama was going down. We couldn’t afford to lose any more time.

It was, I believe, a Tuesday. I’d not been in the studio long and went to make a coffee in the kitchen area which was on the side of the main entrance and TV / sofa spot. Quite often somebody interesting like Neneh Cherry would be dipping a teabag into a cup next to you. I’d got my coffee ready and that’s when I spotted Lee come in. He looked very smart in his broken mirror outfit, shooting random reflections on the ceiling and walls. Mirror pieces on his shoes, trousers, jacket and back, tied on with rope. The Reflective man! I assumed he must be working. So I went into our room and mentioned it to Scott

“Lee Scratch Perry is in the kitchen!”

Being an American and a producer from the Chic and REM world he didn’t know much about Lee, so I filled him in. You would have thought the story ends there. Lee goes to his job and that’s it. It must have been about 15 minutes later I went back to the kitchen to plunder the biscuit tin. Oh! Lee is still standing in the same spot looking a bit miffed. So I did the decent thing.

‘Hi Lee, my name is Rolo, I’m a friend of Adrian Sherwood…” (I thought that might chill him out a bit) “…is anyone looking after you?”

I was now on the unstoppable luge to strangeness, though I didn’t know it.

“This place? Where am I? I had to take a taxi because the bloodclaatt bus driver strike and he dropped me here.”

I figured it straight away; he’s supposed to be at Town House, which is Shepherds Bush way. I know Adrian works with Kevin Metcalfe, mastering engineer from there and I also knew he was working with Lee at this time. So I offered to call him another cab, which I did, but there was an hour’s projected wait. Quickly I asked Scott if he wouldn’t mind if we looked after Mr. Perry for a bit.

“Yeah of course! Invite him in.”

So I invited Lee in for a smoke, which you could do at the workplace in those days, and in he came. I remember him being just a little shy, polite and restrained not knowing anyone, but there was only myself and Scott in there. (I had already phoned Benny the drummer and the other big reggae fan in the band and alerted him about it! “Fuuuuck whaaat? I’m on my way!”)

I think mainly at first he was moaning about the bus strike, but that changed though and he was telling me he’d just worked a mix for Terence Trent Darby. I actually knew that and had recently heard it.

“So what you working on?”

…Scott and I were asked. I think Scott had said…

“Please feel at home, but we must crack on.”

So, good timing, we were working on a track Wheels Turning. It has a reggae style bass and at that time was fairly primitive. Lee kinda liked it and went into work mode. His long-term skills in mixing showed themselves immediately. He knew in a snap which tracks were which by looking at the meters. I remember an organ part that he thought a bit loud:

He was getting more relaxed now, and yep, he’s a motor mouth. He’s humorous though and quickly you realise you are dealing with a very eccentric and brilliant twisted mind. To a newcomer he’s really hard to understand, especially when he talks quickly. I have him down as JA Monty Python. He likes to laugh either with you or at you, but also at himself. One thing he was trying to say to me I had to ask him an embarrassing amount of times to repeat. I just couldn’t crack the dialect. He was patient enough but on the 5th time or so I’d said

He gave up with the actual subject that was musical / technical and answered.

“Eh! You know when you are laying on your back with a beautiful woman sitting on you moving those hips it’s cool ya?”

Haha! That’s so not was he was saying before. I said ‘that’s better!’ and we had a giggle at the switch.

Benny had arrived and Lee had cancelled his cab and asked could he hang out all day?

Lee asked me if he could he see my lyric sheet. Also for a mic to be set up. To the mic he went, deciphering my lyrics (Sheesh! lee Perry is reading my lyrics!) and started recording a vocal in the end section of the song. What he was doing was an instant reshuffle of my lines and inclusion of his own, but suggested by mine.

Live cut up, Woodentops became wooden cops and it all took to the air like a copter and so on, ‘Flying trains Flying planes’ The line ‘Woodenfoot cops on the highway’ popped up. It was about the funny stiff walk a highway patrol man does after he’s stopped you and is coming to book! I had some rough ideas for the album title like “Imp Infinity” but ‘Woodenfoot Cops on the Highway’ stuck in my head from then on.

We moved on and began to write a track together from nothing. “Back to work” was still blazing at the bus drivers, this was a Perry Lyric with Benny Staples on the drum machine, my old Korg DDD1 and I played bass and acoustic. Lee’s manager had arrived with a large size bottle of red wine. We all got hammered on that as we worked. I did explain to Lee that the drivers were striking because they were being attacked and needed protection against robbery and violence – fell on deaf ears that.

I’ve heard about his rubbing spells on the equipment and sure enough all the outboard we used and the desk got the elbow rub and chant.

So in the end we had one co written song and an extra vocal on Wheels Turning end action. A whole day had gone, it was 2am and we all said goodbye as Lee and his manager left. Of course, when we went back in the room the three of looked at each other and said WTF! Was that?

We’d all got used to his outfit and gnarly wheezy laugh. However, to have had a master at play all to ourselves was a big high point in a really difficult project. There were others, but Lee Perry though, stands out.

Behind the scenes Lee’s manager made a pretty hefty cash demand for release and so all we have is the quick stereo reference tapes that we never were able to work on further. Our Label Rough Trade weren’t going to pay whatever it was as we weren’t Terence Trent Darby. What we did get was an album title and Benny went to Notting Hill carnival a week or so after and witnessed Lee on a float singing over our backing track to ‘Back to Work’ endlessly..

We didn’t lose a day. We gained a day. A day’s pure originality and mischievous talent.

All words by Rolo McGinty. The Woodentops are have a brand new studio record Granular Tales – their first for a quarter of a century – due out next Monday, the 24th Feb. We’ll be reviewing it here shortly. Find The Woodentops website here. You can follow them on Twitter here and Facebook here.