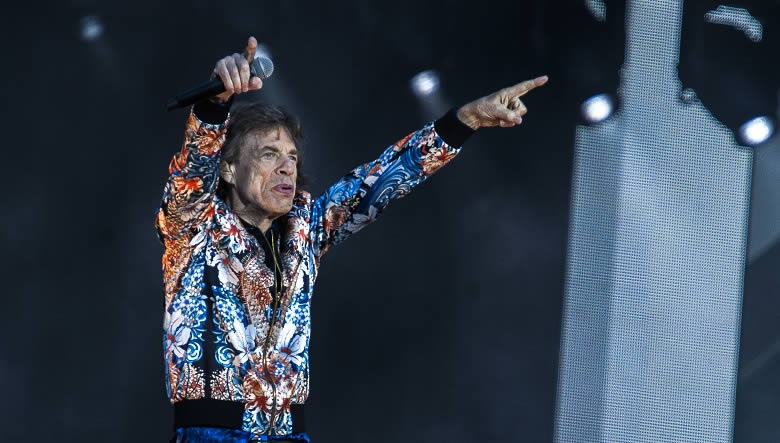 The Rolling Stones who are halfway through their No Filter world tour hit Manchester’s Old Trafford last night. Nigel Carr and Mike Ainscoe report back on this historic show for Louder Than War.

12th July 1962, Ray Charles is number one with I Can’t Stop Loving You, The Beatles have just recorded their as yet unreleased first single Love Me Do and a little-known covers band from London is debuting at The Marquee Club on the city’s iconic Oxford Street. 56 years later they are still performing. Sure, the tunes have changed and they have lost a few members along the way, but essentially this is still The Rolling Stones. Mick Jagger and Keith Richards, the two childhood friends from Dartford in Kent still front the greatest rock ‘n roll band in the world.

Arriving at the stadium a little after 7 pm, Richard Ashcroft is in full flow. It’s been a few years since I last caught him supporting Oasis having just left The Verve. The Stones must be big fans as the artists have had their differences. After Ashcroft lost the composing credit to Bitter Sweet Symphony in ‘97 (a song written around Andrew Loog Oldham’s symphonic version of The Last Time) he famously commented: “This is the best song Jagger and Richards have written in 20 years”. 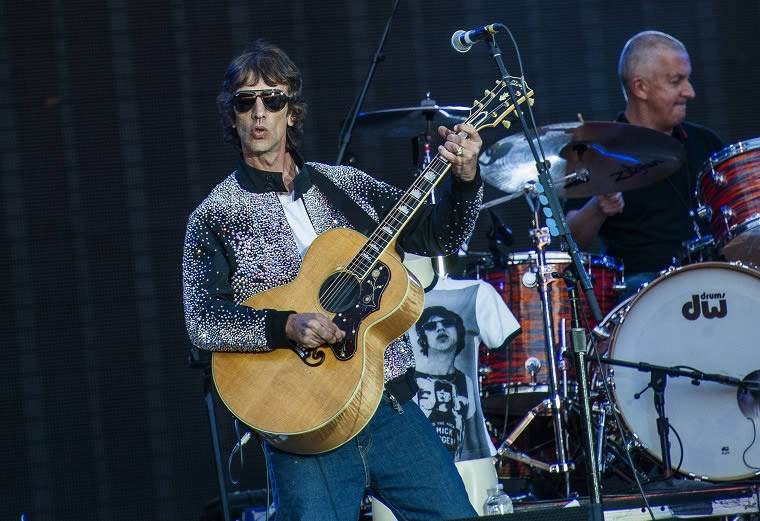 Hair longer in sparkly jacket and shades, he’s looking good – backed by a full band, who deliver in spades. The big hits are here, from the gorgeous openers Hold On and Sonnet to Lucky Man and The Drugs Don’t Work which has the whole crowd singing along. Bitter Sweet closes the set, sounding majestic as the sun drops down over the stadium.

There’s a short break before The Stones hit the stage, straight into Jumping Jack Flash. It’s clear that the band is here to please with smiles all round and Jagger engaging with the audience. Lithe and agile, he literally skips down the runway which extends right into the crowd, his voice losing none of its potency despite the advancing years. It’s a hit-laden barrage of familiar tracks: It’s Only Rock n Roll, Tumbling Dice and crowd favourite Let’s Spend The Night Together. Such is the audience participation on this song it literally sings itself. There is a fair proportion of this crowd who weren’t born when these anthems were released in the 60s and 70s, so to see and hear the roar of them joining in word for word is truly remarkable.

Jagger comments on how Manchester has changed over the years – “We played The Odeon which is now a parking lot and The Free Trade Hall which is now a hotel where the band are staying,” before introducing Like A Rolling Stone “the song that Bob Dylan wrote for us” – Once again it’s one mass sing-along.

Commenting again on Manchester and Coronation Street’s recent killer storyline: “We went down the Northern Quarter and the curry mile and I think I saw Pat Phelan down there”. Mick introduces the band including: “Ronnie Wood, The Ryan Giggs of Rock” which of course elicits a deafening roar from this Manchester United stadium as Ronnie runs down the front to take a bow. He then introduces Keith Richards who walks slowly down to the mic and mutters something incomprehensible – followed by…

“It’s really great to be here, it really is, it’s great to be anywhere”, before giving the biggest of white-toothed grins! 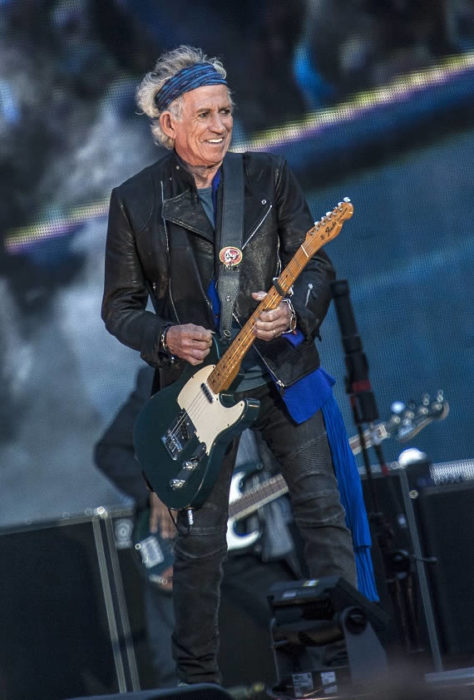 Let’s face it, none of them is getting any younger and there is the odd stray note that ricochets around the stadium from Richards’ septuagenarian fingers. It’s his presence however, the swagger and attitude that really comes across, lips pursed, back arched, hammering out these classic riffs – proper rock n roll!

Ronnie Wood stands alongside Jeff Beck and Jimmy Page as one of rock’s greatest guitarists. It’s easy to forget when a band haven’t toured for a while, but his work with The Faces and this band can’t be underestimated. The way his fingers glide over the frets tonight is a joy to watch – I’d forgotten just how damn good he is!

Giving Jagger a bit of a break, Wood and Richards play a couple of blues tracks together on acoustics, You Got The Silver and Before They Make Me Run – it’s an amazing moment for the two supporting stars who bounce off each other, stage front.

Sympathy for the Devil gives Ronnie the opportunity to showcase his guitar shredding techniques with his Gibson Firebird pinging around the stadium before the band get back to basics with an extended Midnight Rambler. The stage graphics turn monochrome showcasing the band, as various images from their career parade across the backdrops. It’s a long bluesy track which cranks up towards a big rock finish. Start Me Up and Brown Sugar close the set. 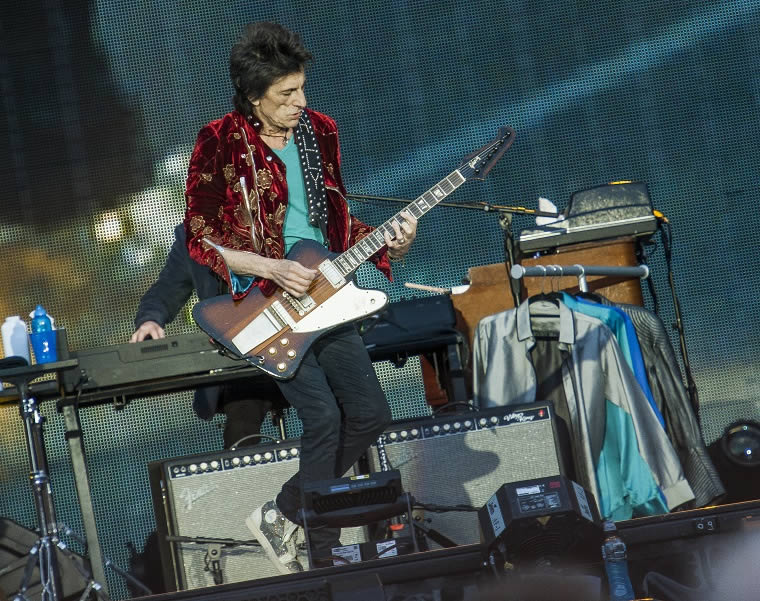 It’s a short wait before they are back with an encore and for me, the show highlight, Gimme Shelter. Backing singer Sasha Allen comes to the fore strutting like a latter-day Tina Turner with a huge voice complimenting Mick’s perfectly. Inevitably, probably the bands best-known track Satisfaction closes the show followed by a huge firework display and it’s all over. 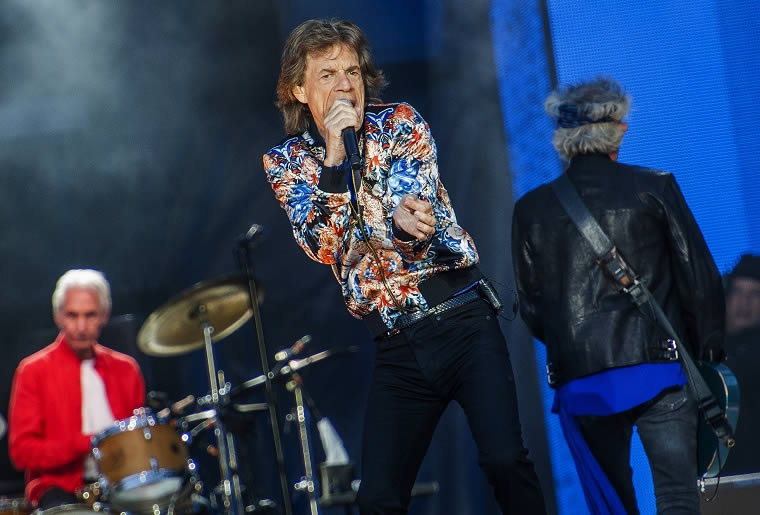 Nothing can beat the raw, feral energy of an accomplished rock n roll band hammering out tracks like these. You can draw a line from some of today’s up and coming bands back through The Stones to artists like Robert Johnson, one of the progenitors of delta blues in the 1930s. That this band can remain so vibrant, command so much respect and be so relevant to them, and still maintain the ability to be masters of their craft is a truly amazing achievement.

I’m not sure how many years The Rolling Stones has left. Rumour has it that this may be their final tour. They can’t go on forever that’s for sure so to catch them this time was a real privilege. A lesson to all young bands with aspirations – how can a band last so long? – write great tunes, maintain the swagger and keep touring!

Photographs by Mike Ainscoe. You can find more of Mike’s writing on Louder Than War at his author’s archive. He can be found on Facebook and his website is www.michaelainscoephotography.co.uk