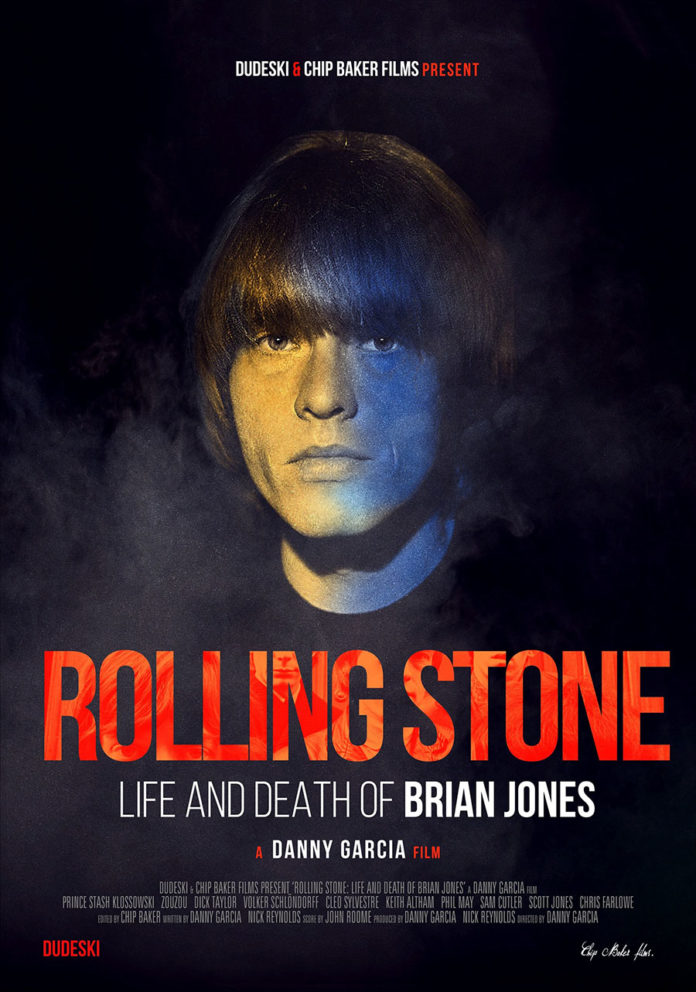 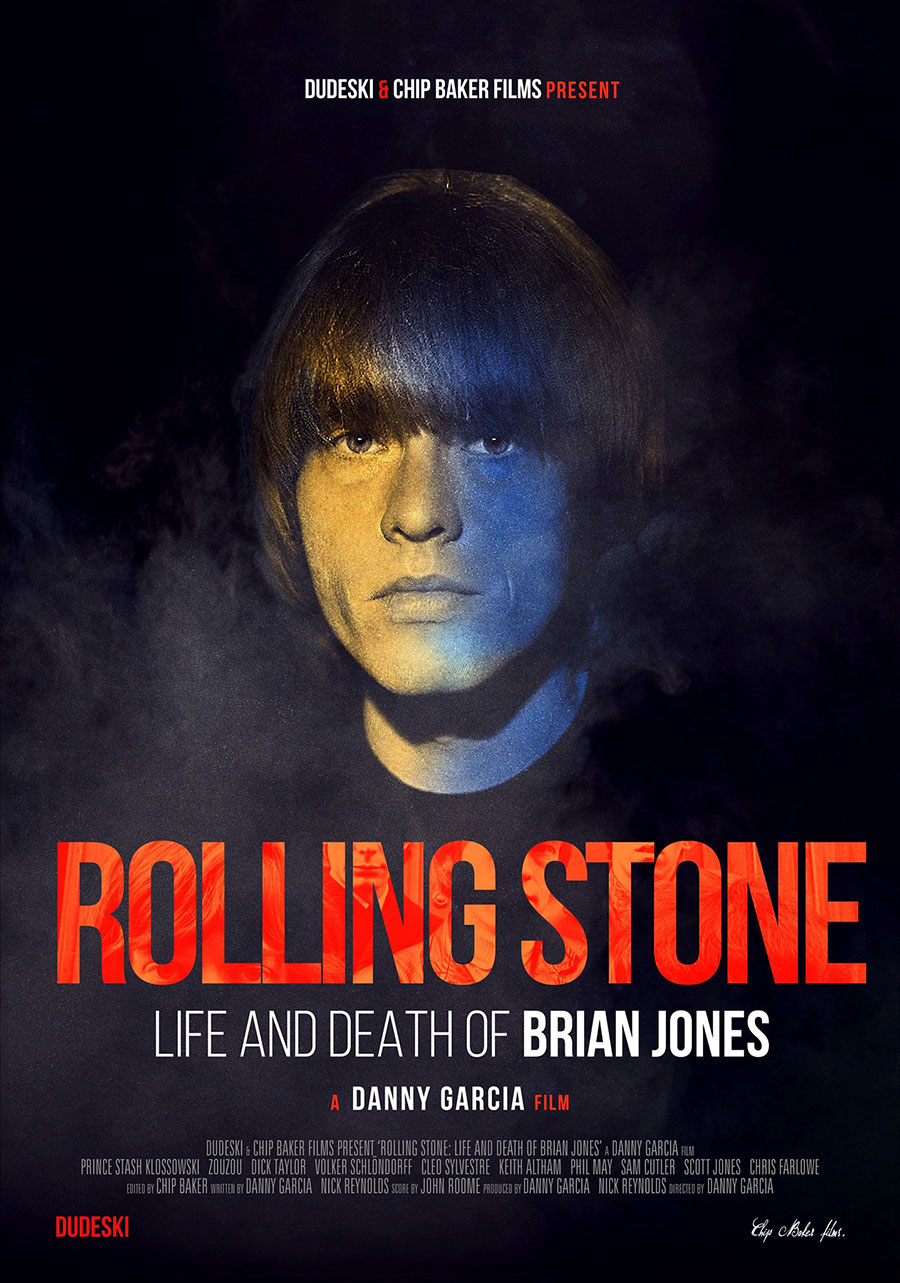 Ahead of a wider release next year, Brett Dunford gives Louder Than War an exclusive first review of Danny Garcia’s next documentary, which tackles the late Rolling Stones founder and multi-instrumentalist, Brian Jones.

It’s pissing down with rain on a Monday evening when I hook up with Danny Garcia at the world premiere of his latest guerrilla flick, Rolling Stone: Life and Death of Brian Jones. Producer Nick Reynolds is with him and it’s been three years since I last saw them at the premiere of our 2016 film, Sad Vacation: The Last Days of Sid and Nancy. The vibe is relaxed as attendees accumulate inside the bar at Regent Street Cinema but there’s an undercurrent that begs a resounding, yet easily silenced question: So why Brian and why now?

Nick said it best at the post-screening Q&A: “Because it’s the 50th anniversary of his death and yet we’re still denied the truth.”

Danny has been a fan of Brian for as long as I’ve known him. We’ve always been on the same page regarding the Rolling Stones and their 1967 psychedelic master opus, Their Satanic Majesties Request. To cut a pointless and controversial story short – we like it a bit more than Sgt. Pepper. Despite being excited at the prospect of finally getting a feature-length documentary on Brian, I secretly wondered how Danny would fare under such a tsunami; with a huge icon that founded an equally huge band of whom he’d never be able to licence a single music track without selling his home. To answer this now, it’s very good. Maybe his best.

I previously mentioned at LTW in a review for Stiv: Life and Times of a Dead Boy that his skills as a filmmaker have somewhat shone since previous efforts. And with Rolling Stone, he’s actually recycled the Sad Vacation formula but crafted a more personal and thought-provoking piece on the whole.

Just before showtime, I’m outside having a smoke with him – talking about Satanic Majesties and the like – and Donovan Leitch suddenly shows up out of nowhere wearing a purple hood over his head. Like a Jedi Knight, he’s gracefully pottering around and observing film displays through the windows. Danny whispered to me, ‘Dude, you’re a writer. Go say something cool and introduce us.’ I said, ‘If it was any member of the Stones, I’d drag them over here in a Jumpin’ Jack Flash. But that’s fucking DONOVAN!’ A few minutes later, Phil May and Dick Taylor of The Pretty Things turned up (Taylor was a Stones co-founder), followed by Irvine Welsh. Then Vivienne Westwood’s son, Joseph Corré…

After a trippy James Bond-esque title sequence, the crowd – and just a whisker away from sold out at that – are instantly thrown into a pool (no pun intended) of archival Stones footage, along with scenes from Jean-Luc Godard’s avant-garde film, One Plus One. Of course, the highlight to anyone worth their weight in fandom will be the rarely seen home video of Brian at 17 with his partner, Valerie Corbett, as they sail upon the Worcester & Birmingham Canal together. There’s also some beautiful footage of him from Marbella in 1966 that I’m hard pressed to recall seeing elsewhere. The fact that any footage made the cut is surprising, so it’s nice to see a good dose of it here.

Nowhere near as gloomy as Sad Vacation or as fast-paced as Stiv, a light-hearted, bluesy, though occasionally sombre, journey through the enigmatic musician’s life is chartered in cruise control. From Cheltenham beginnings to his untimely passing at Cotchford Farm in Sussex, tones of abandonment, rebellion, promiscuity, creativity, and eventually addiction, are indulged in full by the cast of characters that Danny has assembled. Obviously, none of the Stones participated but it’s an informed cast, nonetheless.

Talking of the Stones, they still have a voice in the movie via the odd audio clip; especially the man himself. It was a relief to see the band treated so respectfully throughout the highly conspiratorial second half, with several unsavoury rumours cleared up for posterity.

Naturally, a large portion of the film focuses on Brian’s mysterious death in 1969. A few investigative books have been written over the years, and my fear with Rolling Stone is that the wealth of information, along with Danny’s own research, would be too much for my brain to absorb in one sitting. However, I’m pleased to report that I encountered no such obstacle thanks to his concisely structured storytelling. The narrative is crystal clear and doesn’t bombard you with irrelevant facts. Do we find out what really happened? Um, no. Until the official report is unsealed after its legally enforced 75-year rule, nobody could tell you conclusively. Though you must question why such a document would be sealed in the first place? Foul play permeates like Bisto and the compelling evidence on show is not only sad but downright sinister. And while there is a standout ‘suspect’, you grow to realise that Brain’s death was likely the result of a few factoring situations; none of which I can write for fear of making this a total spoiler review.

And what do we learn about him? One thing is that Brian was a gifted musician but not-so gifted songwriter. Another is that he was a family man long before the Stones left their families. And that his beauty and pre-waster charisma transcended him to a higher plane than that of the group itself; he was the king of the close-up shot!

Once the credits began to roll, Danny and I seized the opportunity to grab a quick pre-Q&A smoke and heard generous applause from the audience seated behind us. He grinned at me, ‘I think they liked it, man.’ And given the unwarranted adversity that he has faced in the back-works while making this movie, I was genuinely stoked for him. When he told me about this project two years ago, I knew that Danny Garcia had a lot to prove; to experts, critics, and himself most of all. Rolling Stone: Life and Death of Brian Jones is a frank, attention-stealing tribute and worthwhile addition to any Stones enthusiasts collection, and sees a long-time fan marking his own territory on the subject like a wolf.

So, again. Why Brian Jones and why now? I’ll give the final word to music writer Chris Salewicz, who says in the film: ‘When you think of the Rolling Stones in the mid-sixties, you think of Brian Jones. You don’t think of Mick Jagger, you certainly don’t think of Keith Richards. Brian is the first British rock star, with perhaps the best look there’d ever been of any British rock star.’