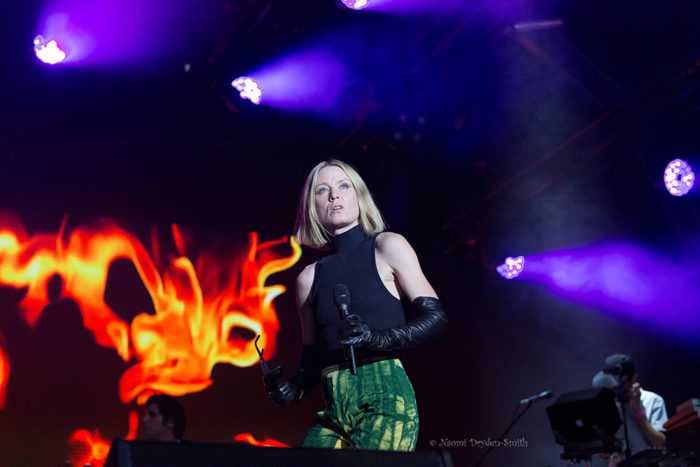 London came out for Róisín Murphy’s sweet melody as the Irish songstress closed off Somerset House’s Summer Series for 2018. Louder Than War’s Andy Duke was on hand to witness the ever changing costumes and sounds of this understatedly eccentric treasure.

The neoclassical venue’s courtyard is transformed into an extension of the previous week’s Pride celebrations throughout the capital. With the capacity crowd prepared to party like it was still 1999, four figures descend onto the large stage. Dressed all in white, and with a vast high definition screen behind them, this quartet of brunette men kick off the intro to Innocence. This offering from Róisín’s latest album was born out of her recent collaboration with producer Maurice Fulton. And its sparse yet effective arrangement translates well live. With its haunting feel and comparatively slow tempo, it immediately becomes clear that this will be a set that builds and ripens rather than be bookended by foot stompers. Murphy’s slow entrance, although met with a roar of applause, is suitably devoid of pomp and circumstance. Like her trade mark vocal delivery, Murphy’s brilliance manifests itself in restraint and control. Whereas the likes of Kylie or Lady Gaga would have dancers aplenty and elaborate ensembles to dazzle fans from the outset, the ex-Moloko frontwoman adopts a more non-standard approach. Initially looking more like a NASA mechanic than a pop diva, she starts the set while perched behind a music stand. With a dark green cap covering her blonde locks, she could easily be mistaken for a late-arriving backing musician until she takes to the microphone. Nobody can deliver breathy vocals with such effortless power and precision as well as Róisín does. And, throughout the set, she proves that there’s plenty of power on tap when required to belt it out rather than just summoning her inner baby doll voice. 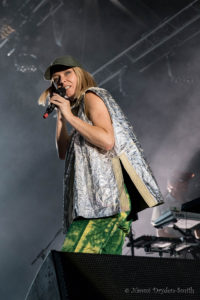 After punctuating the first number’s outro with a flurry of live percussion, courtesy of drum pad-triggered timbale samples, the band performs the Wicklow-born icon’s latest single Plaything. As the track’s catchy and stripped down 90s feel enjoys increased augmentation with live guitar and bass, the singer jettisons her cap in favour of a large pair of shades. These changes of attire happen regularly throughout the 13 song set. And all seemingly via a modest costume box to the side of the stage. Murphy’s stage persona isn’t one of maximising the reveal as much as adding and detracting from her look on the fly. This is testament to the fact that her personality is bigger than the impact of any outfit she might opt for or tweak mid-song. And her wry and dry of sense of humour is very much at the centre of her banter. “All you who bought tickets for this are eejits. Eejits!”. From where I was standing, the only eejits were those fans who decided to opt out of tonight’s performance.

Carefully selected clips from Róisín’s music videos, alongside bespoke graphics, provide the perfect backdrop to the proceedings as the hits keep coming. Flames engulf the screen during Demon Love while Murphy’s construction worker look from her self-directed Ten Miles High promo gets reprised in tandem with the track. In addition, Facebook-inspired ‘thumbs-up’ and ‘heart’ signs revolve across the screen during Like as do looped-up scenes from Overpowered and Exploitation.

The backing band, while tight as musicians, are sadly overshadowed by the many layers of pre-programmed parts but carve out a subtly impressive presence when you can hear them. I’d like to see more of a deviation from ‘the click’ on some of the tracks but the live arrangements as they are keeps the beats tight and the crowd’s feet tapping.

The set closes with two Moloko classics, Forever More and Sing It Back, bringing the crowd to fever pitch.  Were it not for the venue’s curfew, an encore would certainly have been on the cards. Instead, Murphy returns to the stage alone, back in her construction worker guise, and urges the still chanting crowd to return home. They don’t want to believe her and continued chanting her name until the lights come on. 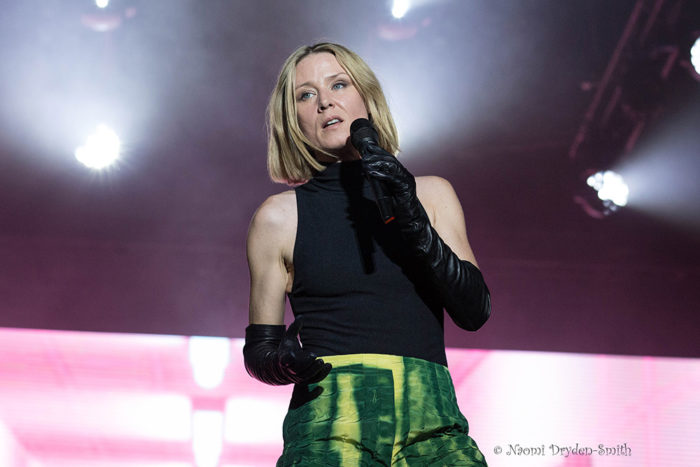 Watch the promo for her latest single, Plaything, here.  Available via: Apple/iTunes – Spotify

All photos © Naomi Dryden-Smith. You can find more of Naomi’s work for Louder Than War here, and she (occasionally) tweets as @nomeshome. Also on Facebook and Instagram. Naomi’s Photography portfolio can be found here