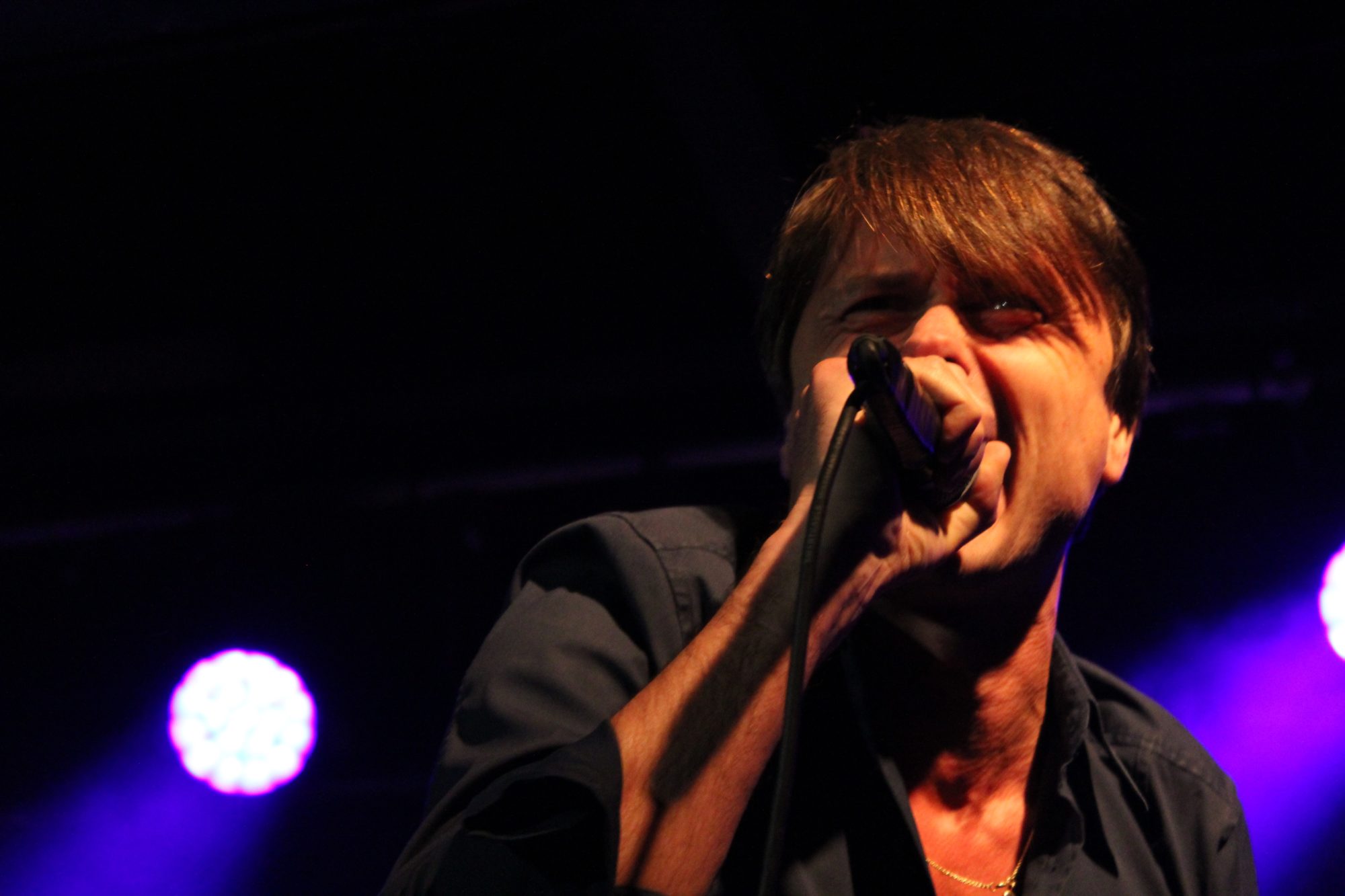 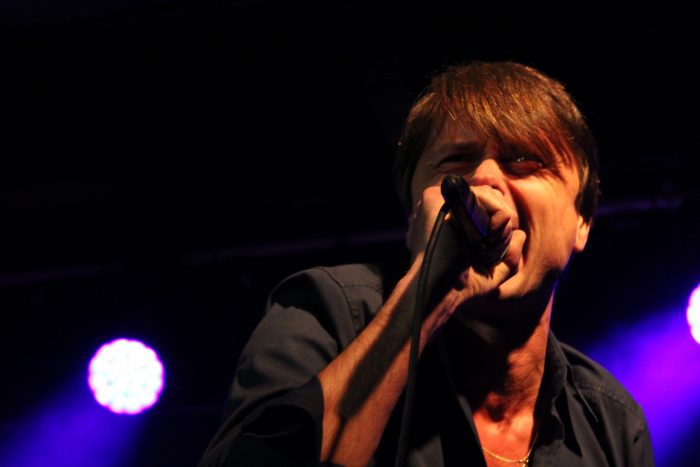 “Focusing on the best emerging, breakthrough and established alternative artists..” an eclectic mix of legends and newcomers. Ged Babey chews out a rhythm on his bubblegum as he finds Rockaway Beach hard to beat.

“My mum and dad actually met at Butlins… not this one, Skegness, but you see, without Butlins, there would be no me.  So I’m very pleased to be able to play here”

I think it was David Gedge who paid tribute to the British Institution which hosted the second Rockaway Beach, but it was a bit of a boozy weekend so it could have been Brett, or maybe Bill Ryder-Jones … or Jah Wobble…. it really was that good a weekend and I honestly can’t remember!

The accommodation is fabulous, the staff unfailing lovely, the food is great, and the PA’s in the two music venues absolutely top of the range.  The variety of music on the menu was also extremely well thought out and the timetable ran perfectly on schedule.  Rockaway Beach 2 was probably the most enjoyable ‘festival’ I’ve ever been to, liking as I do my home comforts. The pretense that camping and roughing it is somehow counter-cultural is shown up for the bollocks it is. A holiday camp -without any pesky kids running around -is kind of surreal, as if they’d all been Pied Pipered away, but a perfect setting for the massed ranks of former indie kids and post-punks ; every social worker and art teacher from a 100 mile radius it seemed.

If Rockaway Beach lacks an ‘identity’ unlike say Rebellion (Punk) Donnington (Metal) then its only because its slightly embarrassing to say its a Indie Music Snobs festival, for chin-strokers and know-alls and people who take music far too seriously….but hey, I’m one, so lets be loud and proud.  Former Peel-Listeners, NME-readers of Yesteryear, Unite and take-over!

Without beating around the shrubbery, Suede absolutely stole the weekend with a performance that ranked among the best I’ve ever seen,  Brett Anderson was not just on-fire, he was a flaming human torch. Its as if his impending 50th birthday next year has made him get in shape and go for it big-style. He was full of energy and showmanship, teetering on the monitors and leaping off them and falling to his knees.  It was as if 2016 -the year of the Rock’n’Roll Death -has energized Brett into thinking he must pull out all the stops before its too-late. All the hits sounded better than they ever have and a dramatic ‘I Can’t Give Her What She Wants’ was a showstopper. Totally Brel, totally Bassey. I may have had something in my eye.

Of the newer, younger bands Kagoule stood out in my opinion on the Friday. Kagoule are an odd-pop, math-rock three piece guitar band whose bassist Lucy Hatter is what gives them there charisma. Live they seem to sound like the young Placebo -which I’ve never noticed from their recorded work. Recovering from a broken ankle, Lucy apologizes for not rocking out so much as normal – which must be something to behold as she still managed to pretty well.

Domino recording artiste Bill Ryder-Jones was a revelation in a laidback casually crumpled kind of way. A real ‘classic songwriter’ who re-invents the wheel in a Scouse slacker Only Ones style. Pete Doherty must hate Ryder Jones as seemingly without even trying he writes the songs which the Libertine has threatened to for years.  Playing on the bigger stage of the two suited the BR-J band as their sound is widescreen and rocks gently. 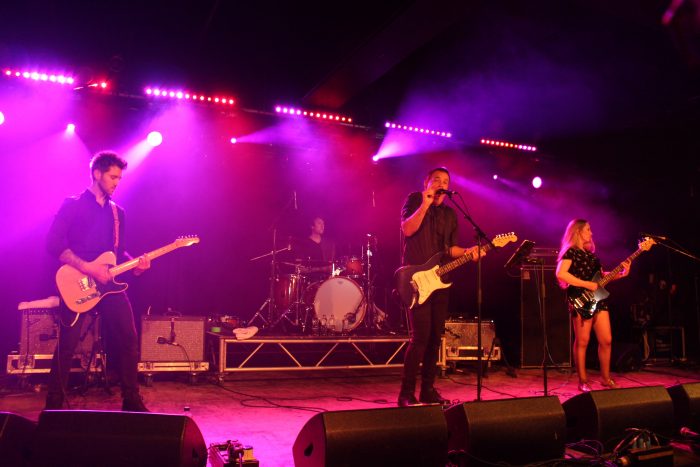 The Wedding Present are at an all-time high too with their peerless Going, Going album. Sadly they only played a few tracks from it and went from sounding world-beating to pedestrian within the space of a couple songs. Katherine Wallinger was wearing Mr Gedges favourite dress though. Which was nice.

The promised eclectism came on the first day in the form of the appallingly 80’s sounding slick soul-pop pap of Girl Friend, the darkwave techno of Blanck Mass and the hippy weird-beard collective Multibird. None of which grabbed me.  Saint Etienne performing Foxbase Alpha was also not my cup of Darjeeling but seemed to go down very well indeed with the crowd in a rammed ballroom. Sarah Cracknell may have a lot of personal charm and be the thinking indie-boys crumpet, but she doesn’t have the strongest voice, and it didn’t fill the room.

Playing the late set were newcomers, the much touted Black Honey.  They do have some cool songs and a nice Urge Overkill type sound but with their expensive new equipment and remarks about ‘just getting back from the States where we filmed our video’ they seen very much an industry buzz-band.

On to Saturday and a two o clock afternoon set from sonic sculptors Eyre Llew was a surprise joy.  Sigur Ros meets Mogwai slow-core and really pleasant stuff too.

Desert Mountain Tribe are tipped for big things but were a bit airbrushed and trad for my liking, in a Cult meets BRMC style.   Clinic, who seem to have been around forever, were the perfect tonic. Droney  yet energetic and danceable, wearing surgical gowns and masks, they are genuine one-offs.

Jah Wobble I’ve seen three times this year now and he never disappoints with an ever-evolving set of ‘hits’ from another planet. The most dancefloor action in the Reds venue was between Wobble and  Lee ‘Scratch’ Perry and his band who went down a storm as well. Even if Iron Shirt was particularly lacking in tunefulness from Scratch.

Wire were astonishing. Loud and heavy but somehow still pop. A rare outing for Mannequin was a treat amongst a set of brand new songs.  Why exactly Colin Newman wore a battered hat which made him look like Freddy ‘Parrott-Face’ Davis, I don’t know – maybe it was a coded nod back to Butlins connections with vaudevillian comedy.

I’m not familiar with Luna’s back catalogue unfortunately  so  consequently lost interest in their delicate country-rock which for the first half hour seemed a faultless combination of Velvets and early Dire Straits (and I mean that in a thoroughly positive way!)

Batuk, a South African techno act were bizarrely out of place.  Yuck were a surprise choice for the late set.  Not a bad band, just a very so-so one. 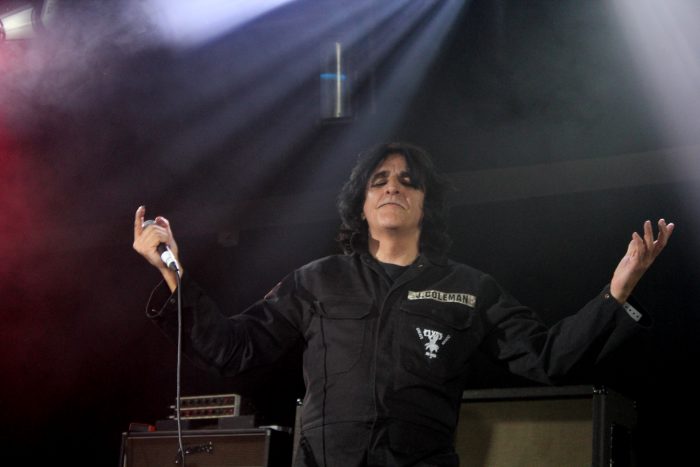 Sunday belonged to Killing Joke whose headline set was unbelievable (as John Robb details here in glorious purple prose).  My mate had not seen them for years and described Jaz initially as resembling Alice Cooper before noting that his performance and look reminded him more of the late, great Alex Harvey. Interesting comparisons because Killing Joke, despite their advancing years do have a dark glamour and insane theatrical intensity about them.  The older songs sounded absolutely epic and the band were undiminished despite the surroundings. “Forget where you are” instructed Jaz at one point, the only sign of mild embarrassment of the Joke playing Butlins.

Earlier in the day Man Made were impressive lesson in light indie-pop classicism. No surprise that it’s Johnny Marrs son who front the band. The audience seemed to be made up of late forties/early fifties couples rather than the teenage audience they deserve, which was the case for the whole event really.  There were younger people in attendance but the average age of the campers was probably 48. But that is the demographic for the top end of the bill.

Cats Eyes are maybe a far better proposition in the studio than live and they should been on the larger stage as they suffered from poor sound. Then, so did Membranes who were on the big stage. Having the choir with them meant that the guitars got neglected maybe and Membranes were just way too quiet instead of an intense juggernaut of sound. Only a dubby In the Graveyard stood out as exceptional and the choir were a baffling distraction for people who had never seen the band before.

Overall it was a huge triumph for Rockaway Beach getting great sets out of legends like Suede, Killing Joke and Wire and introducing some new future heroes  Kagoule and Bill Ryder-Jones for me personally ( my mates thoroughly recommend FEWS – who ‘rock’ – but rhyme with Muse. )  The lower the down the bill artists were maybe a bit too pushed-by-the-industry specials rather than genuinely new, innovative and popular bands  ( I’d say next year The Men That Will Not Be Blamed For Nothing  and  Hands Off Gretel would be my choices, if I was asked, which I won’t be…).  I had a blast though and can’t fault the organizers for value for money and institution that hosted the event for its quality customer-friendliness.  I certainly hope there is a 2017 Rockaway Beach as I’ll be back and persuading every Campaign for Real Indie Fan and Hip Priest to go as well.

All words by Ged Babey.  All photos by Sarah Dryden.