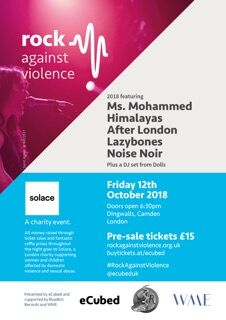 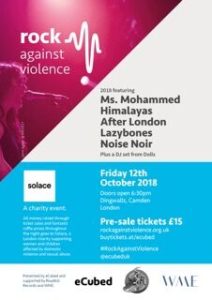 Rock Against Violence is back on 12th October for its 7th year at their new venue, Camden Dingwalls. The charity are looking to raise £30,000 of unrestricted funds this year for Solace Women’s Aid, to fund services such as children’s therapy in the refuges.

Rock Against Violence is driven by eCubed, a volunteer organisation that raises funds to benefit Solace Women’s Aid via various events and activities throughout the year. Established in 2011, Rock Against Violence has grown into Solace’s annual flagship music event, earning a staggering £26,000 in 2017.  With Roadkill Records partnering with them for the past two years, the music line-up just keeps getting better and this year promises to deliver some amazing bands.

Here we have a rundown of the acts that are set to play at this important and prestigious event.

The four piece will be performing their brand of infectious indie-rock.

Gloriously produced post-punk from After London, an accomplished and atmospheric backing to this generations next Debbie Harry.

Up-tempo, unforgettable and ferocious. Lazybones will be sure to get everybody dancing.

Openers Noise Noir aren’t messing around and if you get down early you’ll have your minds blown by walls of fuzz fury and an intimidatingly strong vocal.

You can get your tickets by visiting the following website https://www.tickettailor.com/events/ecubed/187193