Home News Rock The House calls for musicians to enter contest with finals in... 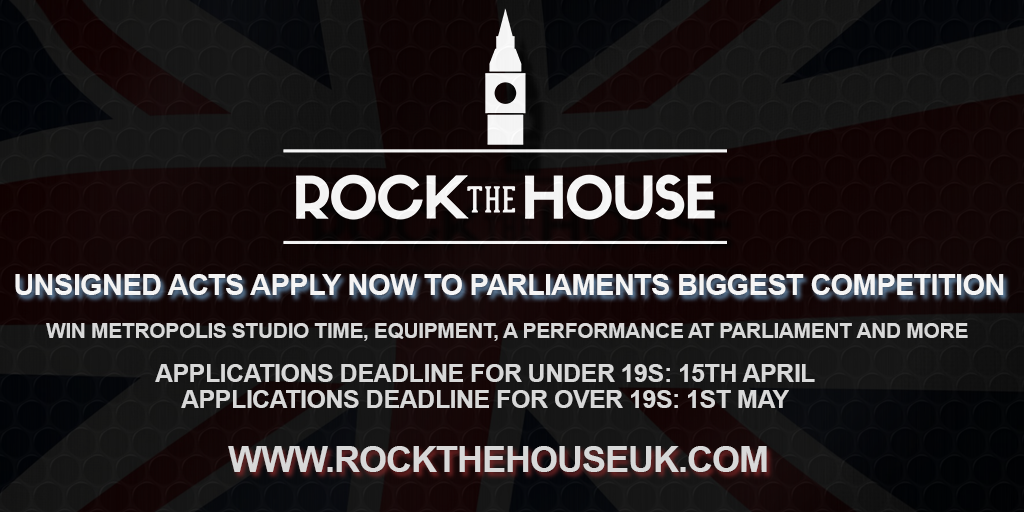 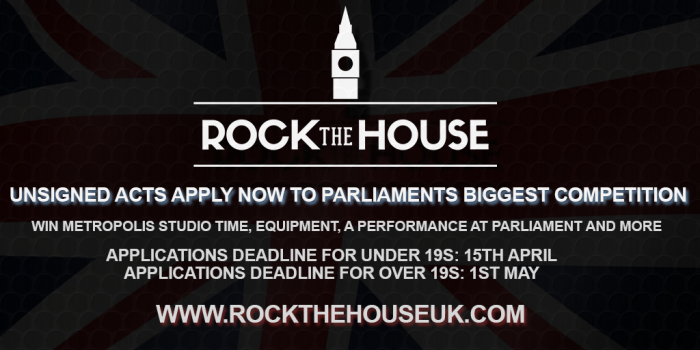 MPs are supporting musicians and film-makers from across the UK by calling for local artists to enter Parliament’s two largest creative competitions, Rock the House and Film the House.

The competition, now in its fifth year, offers the opportunity to put local musicians and film-makers in direct contact with the movers and shakers of the two industries and to have the best of talent take front and centre stage. Judged by the leading lights of industry, with prizes ranging from festival slots, studio time and top-notch equipment, the Rock the House and Film the House competitions are a pioneering opportunity to showcase what has to offer, raising awareness about the importance of Intellectual property (IP) to our creative industries and country.

Dates for the 2016 competitions are:

More information on how to apply for each competition can be found at:

Member of the Culture, Media and Sport Select Committee and Chairman of the All Party Parliamentary Group on Music, Nigel Adams MP (Selby & Ainsty) and Liberal Democrat Lords’ Spokesperson for The Creative Industries, Lord Tim Clement-Jones are to head up Rock the House & Film the House for 2015-2016 in Parliament.

“Rock the House is a great project which celebrates the fantastic diversity of the British music scene and gives musicians a vehicle through which to hold their legislators accountable about protecting the music industry’s intellectual property.”

“Rock the House has once again been a genuine success this year, engaging a unique combination of politicians, young people and consumers alike with the message of respect for IP. I am committed to making sure the copyright system that underpins the UK’s outstanding music industry is understood and respected.”

For more information on how to enter Rock the House go to www.rockthehouseuk.com;

and for Film the House www.filmthehouse.com.

Overview
Founded by Mike Weatherley, Rock The House, Film The House and House The House (‘The House Initiatives’) are Parliamentary competitions which raise awareness of the importance of protecting intellectual property rights among legislators and the general public, whilst celebrating artistic talent in constituencies across the United Kingdom.

Musicians and film makers enter their original material to their MP, who ultimately nominates one entrant per competition category. A panel of industry executives preside over selecting the finalists and winners, who go on to have their pieces played in front of leading industry figures and win an array of prizes, from equipment, festival slots, exposure, recording sessions, radio and TV airplay and more.

The competitions give Parliamentarians an opportunity to engage with a grass-roots creative demographic and provides the creative community with a vehicle through which to communicate their issues to legislators. In short, the House Initiatives provide a means for the UK creative industries to communicate the importance of protecting its intellectual property rights in a fun manner which gives a foundation for Parliamentarians to protect creative output.

Rock the House – what the patrons say
Brian May (Queen):
“It is a great honour to back Rock the House. The UK is a hotbed of musical talent from all
genres, and if the British music industry is going to grow and thrive then musicians need to be able to make a living from selling their product. This competition gives all musicians, from all backgrounds the chance to get out there and make live music – one of the things Brits do best.”

Alice Cooper:
“Having had MPs try and ban Alice Cooper from performing in the UK in the 1970s, it’s great to hear that the sound of shedding guitars and powerhouse vocals will be echoing through the halls of Parliament. Rock the House is a great project which celebrates the fantastic diversity of the British music scene and gives musicians a vehicle through which to hold their legislators accountable about protecting the music industry’s intellectual property.”

Patron, Rick Wakeman (Yes):
“Having a genuine love of both music and politics, nothing pleases me more than seeing the two working so closely together. Rock the House is fast becoming one of the most prestigious events in the music calendar. It just goes to prove what an amazing catalyst music is for all walks of life. More music and less conflict in the world!  Congratulations to all concerned. Makes an old rocker very proud!”

Ricky Warwick (Black Star Riders):
“Music has the power to change, motivate and inspire as politicians should too. Great that it’s being recognized for that.”

Rob Damiani (Don Broco):
“Rock The House was such a success this year, so it’s very exciting to see what great British bands will be discovered in 2015. Metal in Parliament? Yes please!”

Gus Wood (Young Guns):
“I think any opportunity to engage young people in politics is something to be celebrated, regardless of their allegiances. While music can feel much more relatable and vital to people, politics is vital and it’s cool to see two such disparate but important things next to each other. Plus it’s kinda neat walking around such a great building!”

Alex Gaskarth and Jack Barakat (All Time Low):
“Rock the House is a great way for musicians to get exposure on a national stage and each year it goes from strength to strength. There’s also some great prizes up for grabs and if you’re in a band that wants to hit the big-time then get a hold of your local Member of Parliament and enter Rock the House.”

Bob Daisley (Rainbow, Ozzy Osbourne, Uriah Heep):
“I am proud to have been appointed as a Patron of Rock the House, an event that I whole-heartedly support. If ever a House needed rocking, it’s this one!”

Charlie Simpson (Fightstar):
“Good luck to all of the bands taking part in the Rock the House competition, I think it’s an amazing cause, raising the issues that are affecting the music industry at the moment – it’s really important for artists and consumers alike.”

Ian Gillan (Deep Purple):
“It’s very important that we understand the importance and the need to nurture live music. It is the basis for everything in our musical world – and of course also the importance of young musicians understanding how to look after and protect their copyrights and intellectual property.”
Mark Hoppus (Blink 182):
“Rock the House is a terrific way for up-and-coming talent to engage with their local MP and perform on a national scale, make new contacts and friends, and have a great time. I’m honoured to be an advocate and judge for the third year in a row.”

Scott Gorham (Thin Lizzy):
“We’re so honoured to hear that one of Prime Minister David Cameron’s favourite Rock Bands is Thin Lizzy – hey, he can join the band anytime! We would like to wish the Rock the House project every success and I am personally delighted to have been chosen as a Patron, so keep on rocking!”

Yngwie Malmsteen:
“I’d like to wish all the success to Rock the House. I am very happy to be a Patron, thank you very much!”