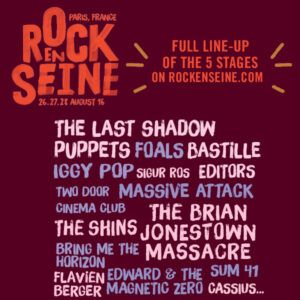 If you believe everything you read then you might be under the apprehension that Paris has ground to a halt with strikes, terrorism and depression from losing the Euro 2016 final on home soil. As it turns out things are grinding along as usual, the city is still beautiful, the waiters are still abrupt and the sun still hits the majestic architecture in a way that never fails to take your breath away.

Life goes on, and so does the party. ROCK EN SEINE, the five stage, three day rock festival held each year at Château de Saint-Cloud’s park on the outskirts of Paris, is in its 14th year. Brits remember it as the place that Oasis split up, but it has a lot more to offer than schisms between Gallagher brothers. Held over the same weekend as Reading and Leeds, the capital city’s premier festival boasts arguably the best line-up of the calendar year. As spectacles, only La Route Du Rock in St Malo and Transmusicales in Rennes in December have anything like the same prestige and pulling power.

This year Rock en Seine will host the mighty Iggy Pop, Massive Attack and Foals as headliners, with Bastille added recently because presumably the locals like bands with French names (see also: The Auteurs, Bon Iver, Les Rythmes Digitales, Ou Est Le Swimming Pool, Le Tigre and so on). Other artists to get excited about include La Femme, Cassius, Peaches, Bombino, The Brian Jonestown Massacre, Soulwax, L7, Last Shadow Puppets and The Shins. Yes The Shins!

It’s six years since Massive Attack played here, and three since Chvrches made their debut. Other notable additions include Sigur Ros, Bring Me the Horizon, Editors, Two Door Cinema Club and Sum 41, which proves there’s something for everyone, or if not, have a wander around the beautiful grounds and follow in the footsteps of Marie Antoinette and Napoleons mark I and III (the chateau itself was destroyed during the Franco-Prussian War).

What is most interesting about Rock en Seine this year is the wealth of French musical talent you might not have heard yet, as well as other new international acts bubbling up on the radar. The excellent Christine and the Queens has recently conquered the hearts and minds of UK record buyers, and don’t be surprised if there isn’t a French invasion across La Manche very soon. For me there a host of unknown homegrown quantities I’m interested in checking out, including Flavien Berger, Casseurs Flowters, Breakbot, Caravan Palace, Papooz, Grand Blanc, Theo Lawrence and the Hearts, KillASon, Birdy Nam Nam and many many more.

There are still day passes and weekend passes left, though camping tickets are all sold out. Tickets for the festival taking place on the 26th-28th August can be purchased here. 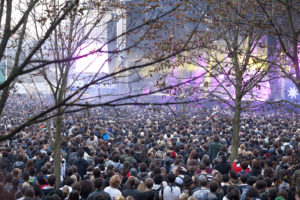