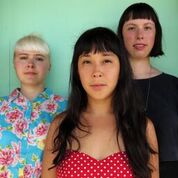 Diverse, unusual, and contrasting in an extremely refreshing and exciting fashion, come the quintet Only A Visitor, with a full length album entitled Lines. Robyn Jacobs focuses on affecting harmonies and avant-pop music. An accomplished pianist with a story, she is a talented composer and arranger of the unique.

Louder Than War’s Eileen Shapiro catches up with the Only A Visitor frontwoman.

Members of the group include: Robyn on vocals and keys, Emma Postl and Celina Kurtz on vocals, Jeff Gammon playing bass, and Kevin Romain beating the drums. Aside from the new album released in June, the faction also released a new video. They have played numerous festivals and are about to tour Vancouver through Nova Scotia.

Louder Than War spoke with Robyn about her inspirations and how she came to create some of the most remarkably individual music I have ever encountered.

Louder Than War: Your music is very different

Thank you. I try to create something original, I guess.

It is very original. What was your motivation to create such a different kind of sound?

I think there were many things leading to the product that we are making now. But, I’m definitely influenced by a lot of artists that fix themselves between art music and contemporary classical, or new music, or whatever you want to call it, and pop idioms. I’m very interested in that place in between.

What inspired you to write your music?

Well I think at the crux of it that if I don’t, I have a crippling identity crisis, if I’m not creating, so we can start there. When I started writing music I was coming out of music school and I really liked performing. But, I had an injury that prevented me from practicing for really long periods of time. Which means that as a pianist the competition is just too high, I wouldn’t of been able to hack it. I probably wasn’t good enough anyway. So I was starting to take some composition lessons before I finished university. I really could’ve thought of that earlier. That’s sort of started me into writing more songs. In the meantime I was also doing a lot of improvising, anything from jamming with my friends to noise improv.

What were you thing about when you wrote Bird Sanctuary?

That one is a big picture song. It really covers a lot of how I was feeling at the time when I wrote it. In Vancouver here, every once in a while you feel the wave of people moving away. It’s a hard town. People find it hard to do their thing. So I feel like every couple of years there is a huge wave of people leaving. So that was happening at that time and also I was struggling with trying to make things happen for myself and trying not to lose sight of why am I doing all this? Especially with my music. What’s the motivation here? When you’re constantly trying to promote what you’re doing it’s easy to lose sight of why you’re even doing it. It’s such a job. It can be very demoralizing or it can work out. It depends. But at that time I was just needing to do something completely unrelated to my music, like hang out with my friends. They aren’t really related but it was the capturing of the moment for me.

Do you believe that you were put on this earth to make music?

I believe that I made that my thing. I definitely feel very strongly that I’m best at what I do. Also I’m a music educator, and I’m really passionate about that too. I think that’s equally important to me actually.

What type of educating do you do?

I teach piano as my day job and aside from that I try to make it as broad as possible. It’s not just piano lessons that’s why I call it a music educator. It really brings more into it I think. I like to think about it as coaching people through their music experience and discovery, while teaching them how to learn the instrument, the piano.

One of my favorite things about playing live is the direct engagement with an audience and having the conversation and feeling the feedback. Sometimes people will just shout feedback, and I really like that energy. I also really like playing around energy in the performance setting. If you rehearse something over and over again you kind of know how it’s going to go. When you get to the stage and actually get in front of a live audience, things happen. It’s become so alive, and I really love that feeling. I think that’s a big part of it too.

Yes, we are actually going on tour on Friday. This weekend we’re playing a festival on Main Island, then on Tuesday evening we’re headed out east, and we’re going to tour from Ontario to Nova Scotia. It’s going to be fun. All of my tour dates are on my website.

If you could say something to your fans, what would you say?

Well, I would want them to know, that I try to make something that they can enjoy in their own way even though some of my contents is really personal. I hope that they are excited about where it goes, as I am also experimenting with different techniques and trying to keep it exciting. I hope it is also exciting for them.

Anything else that you want to promote?

Maybe that people can just keep tabs on me in the future because I have a lot of ideas that I’m very excited about, the next project, and the next project after that. The next album that we’re going to be working on is more of a concept album. If I get my act together and find the right collaborators I would like to somehow expanded it into different art forms, maybe staging for example.