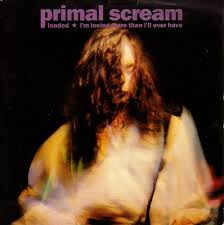 We are sorry to hear the news that Robert ‘Throb’ Young – the former guitar player from Primal Scream has died.

Throb was the band’s original guitar hero- if Bobby Gillespie and Andrew Innes were the creative engine room, Throb was the one who put the rock and the roll into the band. Leathered up with his long locks he was the supayob guitar hero in the group, the genuine thin lizzy and he walked the walk of the romantic rock guitar hero.

Originally joining one of the very earliest line ups on bass Throb was in the band until 2006. He was there when the band started out with their leathered up hooligan waif look and those delicate and beautiful songs and he was one of the core three members along with Innes and Gillespie who made the move to Brighton from Glasgow in search of the regency rock n roll dream just before they became drenched in  the acid house scene – three true blue rockers dressed to kill hanging out in the London clubs. He was there for Screamadelica- one of the classic indie albums of all time and he was there for the comedown albums after- those dark and dangerous records with the great Mani now on board pumping the bass that are still regularily played at LTW and he was there all the way until 2006 for the Country Girl hit before he left for an on going sabbatical to be replaced by Little Barrie.

Farewell Throb you were done of the good guys- a true high decibel outlaw and one of the proper rock n roll rollers who understood that the swagger was part of the art and that rock n roll was about freedom and escape and noise at whatever cost.