Home Blogs Robert Pollard: Of course you are – album review 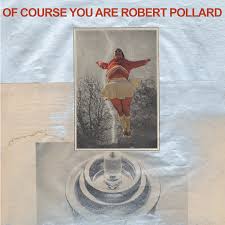 Robert Pollard – Of course you are (Fire Records)

I am not going to go into a massive history of Robert Pollard and his on/off/on/on/off/on (Yeah!)/off (Noooo!) relationship with his band Guided by Voices. There is already a great book written about them by former guitarist Jim Greer and any deviation would take up far too many words for this review.

Let’s just say that Pollard, along with GBV in its various guises, have produced some of THE greatest pop rock tunes EVER released over the last (nearly) four decades. And the impossibly prolific Pollard (this is his twenty fourth solo record on top of his massive recorded GBV output) is very probably a bone fide song writing genius. The songs run into the hundreds. Look them up.

This brand new collection of recordings by Pollard on Fire Records follows very much in the vein of his previous ones. No pretension. Just great tunes about unrequited love, ballsy riffs, beautiful (Beatle-esque) harmonies, experimentation, mistakes, corrections, inventions;  the 12 songs on this collection pretty much run the whole gamut of song writing.

Did I mention riffs? The album starts with a cracker on ‘My daughter yes she knows’ and this carries on to track two. The following tracks are slow burning romantic ones that employ strings and cello to great effect. As well as showing off Pollards singing abilities.

The riffs start up again with ‘I can illustrate’, a classic Pollard composition, that even has a full on metal solo and again has strings to bolster the tone of the tune. ‘Collision daycare’ I can only describe as “cute”. It is such a great tune and saunters along with repetitive refrains, reminiscent of previous classic Pollard/GBV tunes.

Yet again Pollard has produced a set of songs that are tuneful, listenable, addictive, hummable and just plain perfect! And at the time of writing, Pollard has apparently once again resurrected GBV with a band mostly culled from this solo record, and neither from the last ‘classic GBV line-up’ reformation that had fans slavering a few years ago.

A series of high profile festival dates are starting to be announced and, even though this band’s leader, and indeed the band as a whole’s legacy is starting to remind one of MES and The fall, this should no way detract from this record. It is classic Pollard/GBV and should be embraced as such.