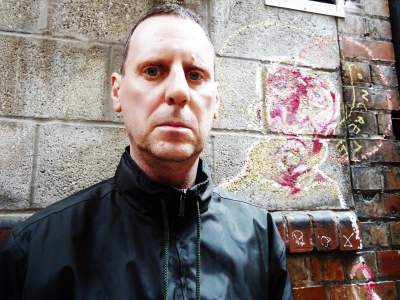 Volume Twenty Six adds to a growing catalogue of solo instrumental works by Robert Paul Corless, released during his sabbatical from fronting Gabrielle’s Wish and the Evil Poor.

A common thread throughout Robert Paul Corless’ solo output is the lack of vocals, something he’s well known for with the aforementioned bands. That being said, these instrumentals lose none of their potency in allowing the music to set the scene and take the lead.

“I think the reason why a lot of my solo work is instrumental is due to the fact of being in Gabrielle’s Wish for so fucking long doing lyrics and singing and getting a bit pissed off with it. I find it easier to do what I want to do. Some of my heroes are like Ennio Morricone and Phillip Glass and John Barry. It’s just one more thing not to think about.”

Corless’ reluctance to sing on his solo records has been resolute until this release, with Volume Twenty Six showcasing the first inclusion of his vocals. In Backyard Conversention, Corless recalls the percussive snarl of his old drinking buddy, Mark E Smith, to whom the album is dedicated.

“There’s only one song in the whole of the Twenty Six LP that I’ve sung on and that’s Backyard Conversention. That particular one I was just sat here one night and suddenly that hook came into my head and I just thought repeat it and repeat it and repeat it. Just do the opposite of what I’m thinking of doing. And it seemed to work so I just put it on the LP. There was one stage where it nearly got muted in the mixdown. I was struggling to hear – because I’ve done so much instrumental stuff – a vocal on it. As soon I started thinking about getting rid of it I thought, right, the answer is to keep it then because that’s what I’m thinking. Try and do the opposite of everything.”

Corless’ love of cinematic scores is evident throughout. Tracks like Angst On Swan Street pulse with the artery-choked despair of a rainy afternoon. Social Fiction chews on the remnants of post-punk’s death rattle then spits it out onto a fresh canvas, framed by whipcracking electronic beats. The Gob Shite Of Oldham Street swaggers with the uncertainty of the condemned. The songs may be in audio format, but they form, in the mind’s eye, like grainy reels of footage.

“Since I was a kid, from my nanna making me watch black and white films,sitting there and something connecting with me and basically enjoying them – not understanding the craft when I was a kid but seeing and hearing how audio and visual was done with lighting and scores. Music created atmosphere in it and all that kind of stuff. I grew up with that and to this day I still watch films as long as they’ve got something I can connect with.”

“As we set Gabrielle’s Wish up and as I met the lads as they came into the group, I gave them stuff like Ennio (Morricone) to study the composition, the tone, how it worked, how it didn’t work.”

Another common thread is the use of samples from TV and film. What’s This About A New Way? samples Clockwork Orange and sounds aptly ultraviolent even after Malcolm MacDowell exits the stage.

“Sometimes I’ll sit in front of the box and run the recorder and just flick through. It’s hit or miss but usually hit. Then I’ll just bring it to the studio. It’s always been like that with Gabrielle’s Wish really. There’s always been Clockwork Orange in everything that we’ve done. On every album there’s bits and pieces.”

New single Epistemological is an attention-grabbing opener and could have been lifted from Side B of Low – a bug eyed trip on the Autobahn – with added “what the fuck?” flourishes that can be appreciated by Eno aficionados and Techno heads alike (you are advised to check out Arkestar’s remixes if you’re in either camp).

“I think again that’s the cinematic sound. Things are coming in, things are going out. I learned a lot of these things working with Chris Nagle (Producer/Engineer – Strawberry Studios). He did all the classic LPs (Joy Division/New Order/Magazine etc) that everyone knows about. How things can come in and go out. Things that are there but not there if you know what I mean? What the fuck is it? I quite like that when I listen to music, it’s fucking about with me. And it’s moving its creating images for me.”

After nearly three years of creating a fiercely singular vision, I ask if he could ever work to spec, in relation to creating scores for films and TV at the behest of the highest bidder.

I’ve never done that. I’ve had people take my stuff to put on their films and stuff like that. I wouldn’t like someone to knock on my door and say “I’ve got this visual and I want you to score it”. Obviously I would take it on board because it’s work. But how I look at it is that I’ve got so much back catalogue –if you can’t find something in that then maybe I’m not the man for the job. Who knows?”

Corless has made good use of Butterfly Music, the Oldham Street studio where he also works as a producer, but this is far from a solo effort. For this release he recruited Andrew Sanderson (bass), Liam Barnaville (guitar), Robert Thomason (guitar), Jack Wakeman (keyboards) and Tim Walsh Jr (guitars) to flesh out the bones of the tracks. You’d be forgiven for thinking this signals a return to a more collaborative process but, even with talk of planned returns for both Gabrielle’s Wish and the Evil Poor later this year, Corless’ solo work shows no sign of abating.

“I’m creating work and as soon as I do the work, submit it, it gets mastered and comes back to me – to me that’s it, its gone, it’s another life and I just move on to the next point, whatever the next point is.”

“I think it’s a bit of that not trying to take myself too seriously – although the music has a melancholia to it, to me there’s humour to it. Dark humour.”

Corless’s music does reflect a gallows humour that is most affecting when juxtaposed with moments of beauty. And this release is no exception: a worthy collection of non-incidental music to accompany the kitchen sink dramas unfolding in the cracks of society.

Volume Twenty Six is out on 16 February. You can keep up to date with Robert Paul Corless on his website and bandcamp

All words by Nathan McIlroy, you can find his author’s archive here