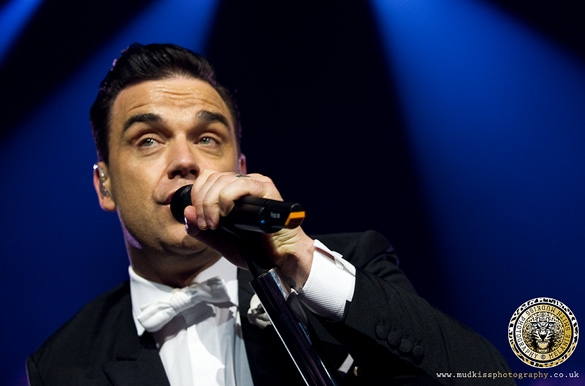 Love him or loathe him Robbie Williams is a solid part of our pop culture and as he took his Swings Both Ways live tour to Manchester he proved that he is back on form as not only a pop star but a top flight showman too. Features Editor Sarah Lay let him entertain her (Groan – Ed.).

The Phones 4U Arena is, like all arenas, a vast featureless cavern of mass entertainment. The tours stop by, the audience changes but it’s all to the same end – to charge all that dead air hanging between crowd and performer with magic and make the outside world cease to exist for a couple of hours.

Of course, Robbie is not new to this trick. He’s been entertaining most of his life, much of that career in venues this size. But as this pop superstar has had his share of super-sized pop problems across those years sometimes that force from the stage has been blindingly brilliant and sometimes it’s been more bitter than sweet.

This isn’t Robbie’s first venture into swing – his 2001 Swing When You’re Winning moved him from boyband drop-out to all-round performer. Similarly. tonight sees Williams growing up and moving yet further from that pop persona to superstar showman.

We get songs from both Swing albums tonight, as well as swing-style reworkings of his pop hits. They’re delivered and interspersed with cheeky humour and interactions with the crowd which make it all very relaxing and more like those all-round entertainers of old – a song, a dance, a little self-deprecating joke, a suggestive wink and handshakes (and even faux marriage) with the awed crowd.

As with the Swing albums there are lots of covers. There’s a Charleston-accompanied Puttin’ On the Ritz, a safari-themed I Wan’na Be Like You and the twin behemoths of New York, New York and My Way.

But there were also some less obvious inclusions – a barbershop quintet take on R Kelly’s Ignition and one of the backing singers taking centre stage for Empire State of Mind. 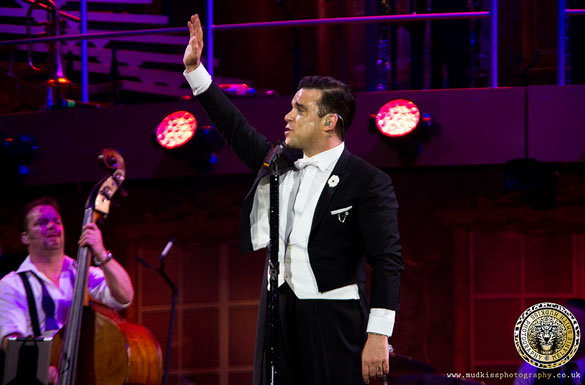 It could easily have been a theme pushed too hard but if anything there were a couple of moments, true of the recent album too, where the concept could have gone further. Swing Supreme being amongst these. Tonight it is about the sing-a-long and the sex appeal for the perfectly passable reworking of Love Supreme but slow it down, and play up the growing grit in Williams vocal for a smokey feel and you could have a spine-tingling after-hours-basement-bar opus on your hands.

Robbie’s voice is changing alongside his softening demeanor; still effortless even when reaching for the edges of his range, that Stoke twang present, but now rough around the edges when he wants it to be. This is a playful performance, just enough of the clowning and cockiness that makes it Robbie and not a facsimilie but all in balance tonight, not pulling too far to either end of the Williams’ scale.

It’s this new steadiness matched with the heart-swell of fatherhood that gives way to high points like Go Gentle, which Robbie dedicates to Teddy and the baby on the way. This grounding in family is supported when he brings on his father, Peter Williams, for a duet and presumambly led to the children’s choir supporting him on High Hopes – the one moment that left me a bit lost and looking for a break from the Swing trope.

We get a medley of his pop hits including a tantelising few lines of the wonderful hymn of the broken, Come Undone.

After prostrating himself before the audience we get the ubiquitous Angels, a song which has gone so far round the over-played cliche meter it’s pretty much back at classic. Or maybe, that’s just me as my own appreciation of this song has done a similar journey, probably partly down to deliberately distancing myself from it for a couple of years combined with, you know, life experience means that where once those key changes had me rolling my eyes they now lead to uncontrollable welling up.

Between Robbie now letting this song fly on its own wings and then offering a final song written for the fans and it feels like its been a long, ultimately rewarding, journey to get here tonight, to this performance. It is the years that weigh heavy, rather than the miles. Those years are always acknowledged in a Robbie show, sometimes with arrogance, sometimes pride, sometimes sadness, sometimes with self-deprecation. And here he stands now; tails, tattoos and that twinkle in his eye. Here he stands as a giant; a husband, a father, a man with the bad-boy-of-boy-band a piece of him rather than the whole.

When he demands ‘Manchester, am I still your son?’, it is not with the longing desire for approval he’s asked for and we’ve tried to fulfill in the past. No, with Swings Both Ways he sheds the insecurities of pop stardom and holds us all with the practiced, confident hand of a fully-fledged showman. And as we affirm our acceptance, those years fall away and we are all, audience and performer, at last grown.

Love him or loathe him Williams is no longer a pop-star with pop-star issues but is transitioning into being a confident, compelling showman. For those of us who have grown up alongside him, our own lives parallel but removed from his, finally seeing him accepting and accepted by his audience is a beautiful thing.

All words by Sarah Lay. You can read more from Sarah on Louder Than War here or chat with her on Twitter.

All pictures by Melanie Smith. See more of Mel’s photos on her website – Mudkiss Photography.