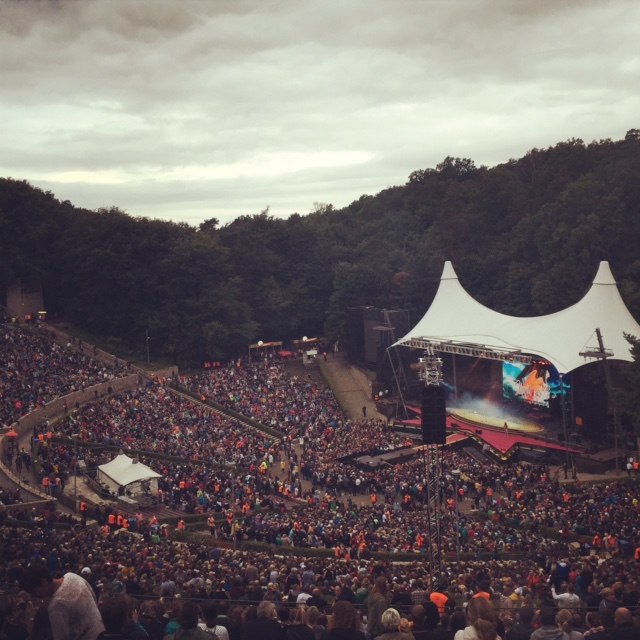 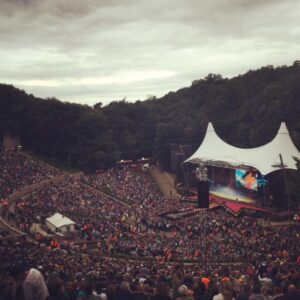 The German leg of Robbie Williams’ Heavy Entertainment Show rolled into Berlin with Erasure in support earlier this week. Louder Than War’s Sarah Lay was there to see the self-styled heavyweight of light entertainment deliver with crowd-pleasing clout.

And tonight the European tour of that album, The Heavy Entertainment Show, reached Berlin and a 22,000 crowd in the Waldbühne amphitheatre. It’s one which will see us gently carried through a varied selection of Williams hits, large and small, and see glimpses of the many personas he’s taken on through his 25 years in pop.

The show was opened for him by arguably one of the finest acts of the last thirty years: Erasure. Having delivered some of the most memorable pop songs of the ’80s and early ’90s they are special guests Robbie Williams on his European dates having just released their seventeenth studio album, World Be Gone, and proving they still have cultural agency in a time where popular music is becoming more background than groundbreaking.

The arena is packed throughout their set, groups rising from the seating to whoop and dance as the synth pop reverberates through the cooling evening air. These are unequivocal anthems, immediately identifiable, a part of the psyche of anyone with even a passing acquaintance with pop: Love To Hate You, A Little Respect, Blue Savannah, Stop!, Drama. They’re joined by tracks from the new album – subtler but no less catchy as additions to their canon.

Subtlety is not something that Robbie Williams troubles himself with often and tonight the show is opened by inviting everyone to be upstanding for his own amended version of God Save The Queen, retitled God Save Our Robbie. His lyrics are at once self-deprecating and arrogant; at 42 and with a quarter century at the top of the pop game he’s still so often the addled with self-doubt and in search of validation, looking for acceptance.

The staging too, taking on the album’s imagery of prizefighting, evoke again that Williams still feel there is a title to defend or to take. Despite that he’s at pains that we’re in this together, we’re part of the team who’ve got his back, that he’s enjoyed ‘growing up with us’ – if he’s still kicking against something it’s not the crowd he’s pulled in.

The variety performer tells are dropped in through the night; a raconteur he jokes and shares anecdotes. At times these are again aimed at poking fun at himself – the theatrical application of hand sanitiser and mouthwash having pulled a woman from the crowd to take on Nicole Kidman’s side of the Something Stupid duet, with a comedic rather than trite flourish. At others they are more honest, touched with the wide-eyed innocence of Williams as music fan. He talks with reverence about George Michael as an idol, about seeing him perform in Berlin in 1994 while they were both on the bill of the MTV Europe Music Awards. An iconic image of Michaels provides the backdrop to Williams version of Freedom, the song with which he first came out as a solo artist on leaving Take That.

He proves himself more than worthy as a pop champion with the rolling out of his big hits throughout tonight – Let Me Entertain You, Come Undone, Kids, Feel and Rock DJ. There’s the now standard  bringing on of his dad, touching rather than indulgent, for a duet on Neil Diamond’s Sweet Caroline, and a tongue-in-cheek medley of chart ephemera from Livin’ On A Prayer to Here Comes The Hotstepper.

The eclectic setlist takes an unexpected turn with the addition of Rudebox. The 2016 flirtation with rap was slammed with critical derision on release while simultaneously selling more that 24,000 copies to rise to a high of number 4 in the UK charts. And in Germany, as well as Italy and Switzerland, it held the hit parade top spot (not to mention being nominated for an Ivor Novello and winning International Song of the Year at the Mexican Grammys).

Whether it was the sample of Sly and Robbie’s Boops (Here To Go), the rhyme-laden rap or the abundance of references to brand names that made it appeal is hard to say, but tonight it’s met with a rapturous reception.  The beat is massive as it resounds through the amphitheatre and the clanging lyrics – a sort of freefall through popular culture with little logical connection but plenty of borderline offensiveness – startle anew. The track has a sense of a child pushing boundaries to see where the limit lies, a marked change in direction for Williams it appears now as just another ricochet between pop-personas, an experiment that captured the dancefloors of Europe. If this song is a low point of Williams career it sets the commercial success bar pretty high for other contenders, if not the creative one.

This lyrical style has been revisited, albeit it in a slightly subtler form, on recent single Party Like A Russian. Another sample gives the track instant familiarity – although more probably associate the bombast of Prokofiev with the credits of The Apprentice than the composer himself – and during which Williams’ chants unravel as the song progresses. The staging is kept relatively simple throughout tonight but dancers perform a ballet around the singer, costumes with a nod toward the styling of the Pet Shop Boys mean we stare entranced even as the idea of ‘having it like an Oligarch’ jars.

He may have been the darling of the boy band and become the problem child of pop, but as he grows Robbie Williams has become a one-man variety show. Tonight this is the twinkle-eyed darling, the suave Swing singer, it’s his bad-boy-come-good sentimental adult pop, and the ridiculous rap phase revisited. It’s his anthems, his covers and a few of those ones you know are best forgotten but sing anyway. If you’re familiar with only one facet of Robbie then this could be a disjointed set that hurtles through too many of his personas, but for others it will be the mild thrill of a rollercoaster around his boundaries in mainstream pop. With a verdant back catalogue to pick from Williams tactfully puts in enough of the big hits to keep casual fans happy, references his past with a new-found neutrality, and even nudges what could be the cliche of encoring with Angels – tonight dedicated to Linkin Park’s Chester Bennington – toward a communal experience of a pop classic.

A seasoned performer, easy-listening and now easy-going, he completes the evening with a rendition of My Way further pushing the idea of a variety show, of something for everyone. A blast of a pop show Robbie Williams adequately achieves what he sets out to with this tour – a shared experience in light entertainment – and successfully defends the title of Heavy Entertainment Champion of the World.

All words by Sarah Lay. You can read more from Sarah in her LTW author archive, find her on Twitter, and find her full music portfolio here.