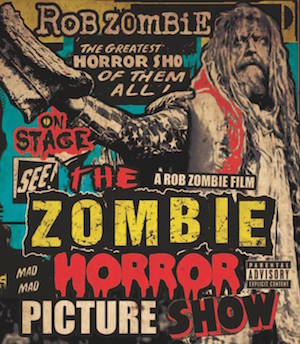 Rob Zombie has many fingers in many pies. Whilst making some of the greatest industrial rock with White Zombie and under his own moniker, he’s taken many steps into the world of film and screenwriting. This concert film is directed by the man himself and it’s easy to see the nuances throughout.

There is grainy footage throughout which flits between a modern visual, and watermarked and faded visual styles from yesteryear. I’m not sure of the effect of these but it helps create a visual feast. One of the main things concert films set out to do is capture the atmosphere of the concert. There are plenty of crowd shots with plenty of gratuitous nudity with topless women enjoying themselves, split screen shots and plenty of views from the stage to provide an artist perspective of the audience. So this kind of objective is met. The perspectives show the show in all its glory.

From the band walking to the stage for the opening of Teenage Nosferatu Pussy to the epic closing of Dragula, Zombie commands the audience from platforms and around the stage like a maverick outlaw on a dictator trip. He interacts with the crowd in his own unique fashion but more often than not using a whole heap of expletives that send the American crowd wild!

The show is a visual onslaught. The band make several costume changes and the stage show is a neon monster. Screens adorn any part of the stage that can be; guitars glow and there are pyros aplenty. There are also dancing aliens, bubbles and creatures that stalk the stage; most notably during a stellar run through Meet The Creeper.

Of the music, the sinister swing of Living Dead Girl never fails to impress, and Superbeast is a pounding slice of industrial rock. A cover of Grand Funk’s We’re An American Band is a whole tonne of fun. More Human Than Human sees a dancing alien like creature and the stage swamped in bubbles. A closing double salvo of Thunder Kiss and Dragula are vociferously met by the Texas crowd; both are classics that would send any rock club dance floor into a complete frenzy.

On the whole, the concert film is good. It shows the spectacle and grandeur of a Rob Zombie show. The music sounds good and the band members are all tight to a tee in their musicianship. As a DVD package it is missing any extras and contains the standard audio mixes you’d expect (2.0 and 5.1). With a show of this stature it would be nice to see a few behind the scenes insights. Make no mistake though, Rob Zombie is this generations Alice Cooper when it comes to stage shows of this ilk. I’d recommend trying to catch Rob Zombie live if you ever get a chance.

After months of teasing fans with video clips and mysterious messages, Rob Zombie unveils via Rolling Stone a ground-breaking crowdfunding campaign for his new film “31” at RZ-31.com.

All words by Dom Walsh. You can read more by Dom on Louder Than War at his author’s archive. Dom also tweets as @bwfcdom83.