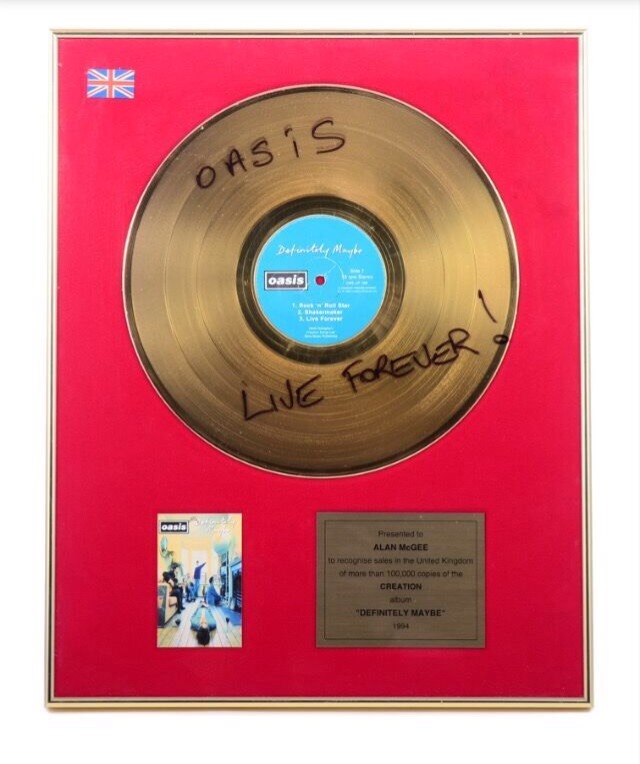 The world of music memorabilia and collectables is one of varied tastes, rarities and very much an all-round interesting topic with some of the most amazing back stories to it all. All of which was covered as I recently got together with one of the UK’s most renowned music-memorabilia dealers, movers and shakers Rob Fiddaman to ask ‘what’s it all about?’ and what are the pieces that he’s still out looking for today..

Rob Fiddaman: I’m originally from Norwich, Norfolk but have lived in Manchester, Spain and Florida and now reside in Staffordshire. But right now I’m currently in Havana!

what was it that got you into this industry of music memorabilia, and what are the bands, scenes, artists and genres you mainly deal in?

Good music man! I’ve loved music from as young as I can remember. Bands like the Beatles and Stones inspired me to buy original vinyl and then I just progressed into buying old posters and autographs and the rest my friend is history!! I deal in British 60’s – Oasis and Britpop memorabilia.

What would you say is the most valued piece of memorabilia you’ve ever come across, and why?

When you talk about ‘Value’ to a collector or collectors there judgement can get a bit blurred and conflicted. For example, a dealer could just put a ‘value’ in money terms on an item but if a collector feels it’s so unique or something they need in there collection to complete it then the “Value” in their mind is much higher. Personally, for me any oasis related contact signed by Noel, it’s historic and without this so much could of changed so for me it’s priceless. 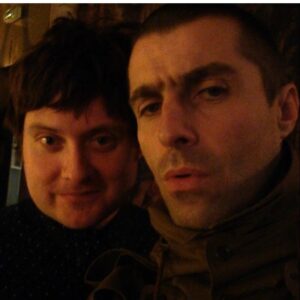 How about the most expensive piece of memorabilia you’ve sold..do you find crazy bidding wars can break out for a popular piece of britpop memorabilia sometimes?

I’ve sold a fully signed Beatles Record ‘Please Please Me’ which is only something to dream about these days – God when you hold something like that you really can’t explain what it feels like but I know I sleep with it under my bed.
Yeah, bidding wars are not always pleasant. In an auction, it’s what you want, two people fighting over the phone or the net but when you have an item a few serious collectors want they fucking lose there mind. It’s like they become proper aggressive, no it’s not for me .. I have people that collect certain things like gig posters, tickets and album props. So when I meet a band member if they have something like this I go directly to that specific collector and do the deal, under the radar best way!

Compared to say 60’s memorabilia where does the 90’s/brit pop stuff figure, would you say due to the recent Manchester reunions of bands like Happy Mondays and Stones Roses that that scenes’ memorabilia has become more valuable maybe?

The values are not even halfway comparable with the Beatles, Stones and Hendrix but people that have a lot of high-end Beatles memorabilia are now buying into Britpop and especially Oasis. So in terms of growth if you have good items hold on to them or look at buying as it’s better than money in the bank. But be careful buying and make sure you have provenance and it’s a respected seller.

But no, in my opinion not at all, they (90’s britpop groups) have raised there awareness and profile with gaining new/younger fans and with this new collectors will start to dip their toe in the world of collecting memorabilia if Oasis did have a reunion (which is currently dead in the water ). This would have a negative effect as they would be back out and signing again as a band – with which line up is another bag of worms but early Oasis memorabilia from 1993 till 1996 will always be a good investment.

How about some of the classic pieces of UK music memorabilia you’ve always been on a mission to get your hands on – like for example Ian Browns money T-shirt or a pair of Jarvis Cockers old glasses?

Mmmh let me think ….Kate Moss yeah can I say that ?!..Interestingly I actually already own a pair of Noel Gallagher 9kt Gold John Lennon style glasses that have a rose tint lens, very similar to the ones he wore for the video of Don’t look back in anger. These were auctioned by a close friend but I found out who, not by the auction house as they can’t disclose it but I find some of these things out through the contacts I’ve made through the years. 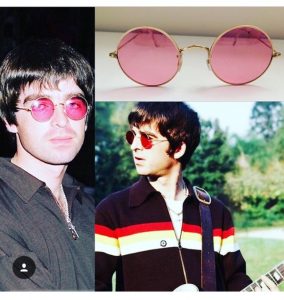 For me to really want to buy something jaw dropping or an item that is as close to something comparable to the Holy Grail of collecting it needs to be something instantly recognisable, iconic. The hairs need to go up on the back of the neck and the wallet needs to start vibrating (laughs). Certain items can speak out with their history and importance to the artist, band and moment. In time these objects define a generation and this is what I want.

If you could name one piece of memorabilia though that you’d love to find..what would it be?

What would I like .. that’s hard as I’ve had and still have some amazing pieces in my collection and I’m also struggling on where to keep it all. But I’d make room for John Lennon’s white piano which he used on ‘imagine’.. as you can’t really top that can you.

How about maybe some of the more odd and disturbing things you’ve been offered or that have come up as ‘memorabilia’..like say Pete Docherty’s old needles or maybe Ian Watkins old PC? can the memorabilia thing get a bit out of hand sometimes?

Yeah man, I once saw one of John Lennon’s teeth sell for like £20000 once..That’s bizarre isn’t it

I’m thinking with the contacts you’ve made over the years you must be one of the first memorabilia dealers that gets the call when something comes up…either from the artists themselves or someone in the industry?

Yeah, I’ve built up a good client base of notable band members and people that have worked alongside them whether that be designers, photographers and managers. I’ve been concentrating on this for about 8 years now and found I’ve been recommended between band members, as it’s a small world this music scene you know. But it’s been Alan Mcgee who has given me loads of support, helping set up interviews with bands like Happy Mondays and Shed 7, he’s been really great.

As well as the memorabilia you also run Britpop TV interviewing leading bands and artists.. you’re a busy chap hey, how did you start doing this?

It was kind of a natural progression but not really anything I planned to do. But I was finding that when I was meeting and consulting for people in the Britpop/music world that people on my social media kept asking me what so and so was up too and are they going to tour again – you know that kind of thing. 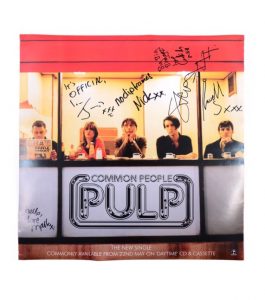 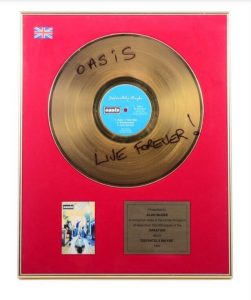 So I thought I may as well interview these people that I know or meet, I mentioned this to Alan (McGee) and he was like “Do it, you know this could actually work”. So I interviewed Nigel from Dodgy, what a guy he is. So inspirational and a lovely guy then following that was Bez and Rowetta from the Mondays and Alan McGee. And with more interviews coming soon, the viewing figures have been very encouraging so it’s all looking ace.

Your name in the music memorabilia scene has seen you appear on TV programmes like ‘Posh Pawn’ and the discovery channel. It seems a very popular thing to have these days (music memorabilia) would you say that market is today at its biggest stage yet in terms of the interest and money it now generates?

Yeah, I’ve made a few TV and Radio appearance’s mainly on these antique/auction style programmes as an expert. ‘Posh Pawn’, I’ve done a few episodes with them and also helped with valuations behind the scenes. I did another show on history but the most fun was my mate Jesse McClure’s (ex-storage hunters) very own show which was aired on Discovery British Treasures American Gold. I was buzzing when he asked me to appear on episode one, he’s my Home Boy and we have a fucking riot when we go out … my god the stories I could tell you, he’s a legend.

Lastly Rob, what type of things have you got planned for 2018 re memorabilia, TV and so on?

I’ve got a book coming out ‘Buying into Britpop’ and who knows until my phone rings again.. but I’m ready to roll with it. 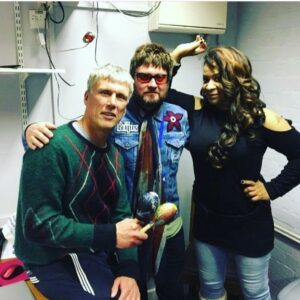 and for Rob’s memorabilia go to the Britpop Store – https://www.britpopstore.co.uk/