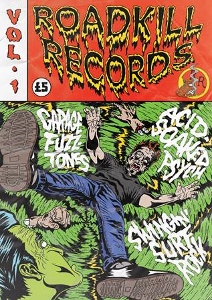 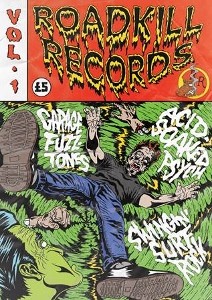 The conglomerate of bands on the first Roadkill compilation are an interesting musical mix of garage, surf, psych and punk. One thing they have in common, however, is the quality of their respective sounds. Whether you like things deep and dirty, with enough drive to take you across a continent, or spaced enough to pull you into another dimension, this collection should have something to address your musical desires.

For those who like it loud, there are plenty of tracks to keep noise-niks happy. Love Buzzard, fresh from releasing the excellent ‘Antifistamines’ album in February, bring ‘Guns Before Butter’ to the mix. The track features their trademark echoing vocals over some fantastic scuzzy garage; classic Love Buzzard. St Agnes give us some thumping great rock, with gutsy vocals and added harmonica on ‘Where the Lightening Strikes’. Deadwardians kick in with more heavy rock on the excellent ‘Like an Animal’, one of the stand-out tracks on the compilation. Hola Ghost bring another top track to the album with ‘Copenhagan Gringo’, a mix of surf, thrash-type vocals and a Spaghetti Western brass section, which works far better than you would think.  Deja Vegas make use of hypnotic, deadpan vocals over a repetitive riff before the full onslaught begins on ‘Skeletons in the Florist’  and Mystified throw some fine garage punk into the mix with ‘Acid Gasp’.

For the 60’s pop/ surf/ spaghetti western-style garage aficionados The Sly Persuaders kick off the proceedings with ‘Fool’, with its rockabilly chunky guitars and shimmering keyboards, topped off nicely with a dollop of atmospheric vocals. Dead Coast give us pure surf with some nice 60s-style keyboards, whilst The Parrots carry on the retro feel with ‘I Did Something Wrong’, a sixties garage pop stormer. Thee MPVs bring some brilliant messiness to the album with a live version of ‘Funeral’. The sound is good, fast garage rock with punky vocals, but the retro vibe remains. Muertos bring in some Lo-Fi with the heavy riffs and deliberately repetitive vocals on ‘Ballroom Spritzer’ and the Cramps-esqe X-Ray Cat hit us with the pure instrumental ‘Wolf Cop’, a track that wouldn’t be out of place as an early 60s theme tune.

Psych fans need to look towards Venice Trip, Desert Mountain Tribe and Sunlight Service Group for their fix. Venice Trip play ‘Oh Katy’ in the manner of The Doors, but have a lighter sound, making the track more up-beat. Desert Mountain Tribe let the tension and the volume rise gradually throughout ‘5th Song’, setting the mood thoroughly before the vocals kick in. Things become more dreamlike in ‘Winemaker Part 2’ by Sunlight Service Group. There are hints of early Hawkwind, Gong and Pink Floyd on this excellent piece of psychedelia.

The other bands? You’ll need to make your own mind up about where Dirty White Fever and Broken Soundtracks fall within the spectrum of music on offer here. The surf guitars and dead-pan vocals on ‘Not Another Love Song’ by Dirty White Fever vie for position with some very nice guitars. The Broken Soundtracks contribution, ‘You Can Try’, features some decent Peter Perrett-style vocals and a superior rock guitar introduction.  Actually, all the bands have something highly original, and are difficult to place within one genre, which is as it should be. The modern cross-genre bed hopping is bringing the current scene to life, the diverse musical influences working together to produce exciting and unique sounds. This compilation by Roadkill gives us a tantalising glimpse of the standard of new music available, acting as a signpost to the bands we should be watching for the future.

To celebrate the release, Roadkill are hosting an all day launch party at The Lock Tavern, London on March 5, featuring live sets by some of the bands on the compilation. Details can be found here: Event page: https://www.facebook.com/events/112637215785709/