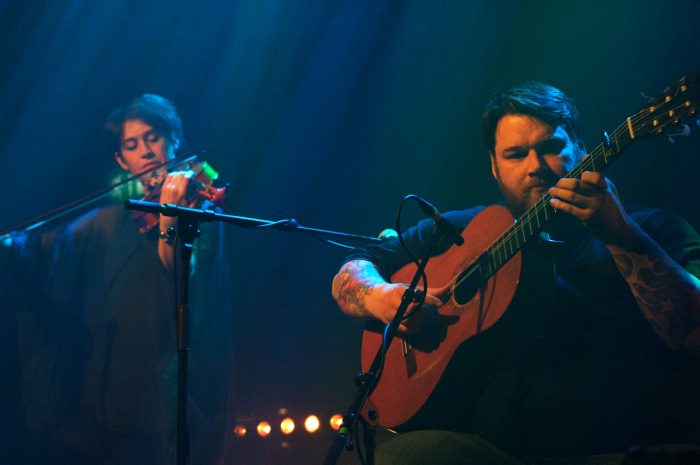 Susan Le May heads to Glasgow’s The Art School to see Scottish Album of the Year Award-winning guitarist RM Hubbert, who assembles a cast of contributors for the hometown launch of his new album, Telling The Trees.

Electro-pop and classical, flamenco-inspired guitar might not seem an obvious pairing, but for RM Hubbert and Sarah J Stanley it is a coupling that works. Tonight the multi-talented Stanley provides support in her HQFU incarnation, as well as helping to bring much of Hubbert’s new work to life.

It is release day for Hubby’s new record, Telling The Trees, and he has gathered many of its contributors at The Art School in Glasgow for performances that may never be repeated. His latest album is utterly brilliant – a selection of collaborations born of admiration and trust. The award-winning Hubbert is no stranger to collaboration, but this time his method is altered, with results both surprising and beautiful.

Where previously he has used music to reconnect with old friends, this time he sought fresh faces to create with – some long-established and some poised for their own wider success. Each artist – many of whom he’d never met – was gifted a piece written with them in mind, then given free reign to shape the song as they saw fit. Together with the impressive cast he has assembled, they made a series of unique and wonderful songs, and this evening there’s a heady, celebratory air.

As HQFU, Sarah J Stanley might seem an unusual choice for support, but Hubbert’s new material flirts with pure pop, while Stanley’s lyrics can be dark and menacing despite the all-consuming electro/dance soundtrack. ‘Good Reason’ is a highlight of her set, with a stunning vocal, infectious melody and elevating beats. She returns to stand in for contributors that can’t be here tonight – through distance or commitments – and injects her own flair into the likes of Kathryn Williams’ sinister ‘I Can Hold You Back’ as well as her own ‘Probably Will/Probably Do’. 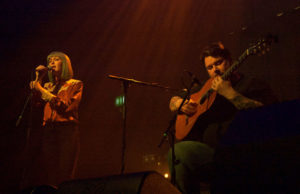 For ‘KAS’, Hubbert is joined by musician Aby Vuilliamy, whose playful strings dance between the bounding, heart-swelling guitar parts. There’s a lot of love in this room, and Hubbert’s obvious optimism is a welcome sight for those who’ve followed his work. In recent years shows have seen him largely as a lonesome figure, telling tales of loss and sorrow, but tonight he is clearly elated and loving the company he’s keeping.

It’s Ladytron’s Helen Marnie who provides another touching moment, as Hubbert explains that without her his latest project wouldn’t have happened. Forthcoming single ‘Sweet Dreams’ is as gorgeous as it is vulnerable – a beguiling electro-pop gem that lays itself lyrically bare through sugar-sweet vocals.

Emma Pollock is tonight’s unexpected guest, and is typically enchanting with ‘Monster In The Pack’ from her own latest release, and ‘Half-Light’ from Hubbert’s previous collaborative album Thirteen Lost And Found. Rising star Martha Ffion is out next, with an entrancing rendition of nostalgia-soaked ‘The Unravelling’.

Then to Kathryn Joseph, whose delicate confessional ‘The Dog’ is perfection. A rare chance to see her out from behind the piano, standing solo at the mic flanked by Hubbert and his guitar. The heartbreak and flawless vocal are even more confronting and fragile than on record, but no less captivating. 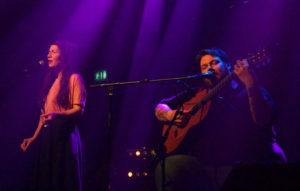 The final guest for the evening is folk’s leading lady Karine Polwart, and ‘Yew Tree’ is buoyant with new love, hope and happiness. Hubbert returns for a solo three-song encore of ‘Bolt’ followed by the moving instrumental ‘For Joe’. He ends with the unconventional romance of ‘Car Song’, written with and usually sung by Aidan Moffat.

The mutual respect and warmth from all involved is undeniable, and tonight secures Hubby’s status as king collaborator and master of whatever he turns his hands to.

Words and pictures by Susan Le May. More work here or find her on Twitter @alcoholiday_sue.