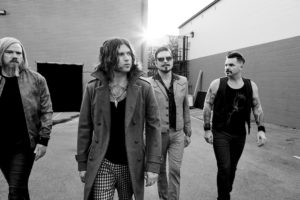 Rival Sons have had a huge year so far in 2019. Not only has their fantastic new record ‘Feral Roots’ received great praise from fans and critics alike, they’ve also just secured their first number one on the US Billboard Mainstream Rock charts with single ‘Do Your Worst’. The band will be returning to the UK later this year to play a set at the upcoming Kendal Calling Festival in July.

Jared Musson was lucky enough to be able to have a quick chat with frontman Jay Buchanan, who told me all about the band’s latest record, how touring has been going, and just how good it feels to be reeling in some well-earned success.

After explaining to Jay that I’m calling from Manchester, he recalls Rival Sons recent trip there.

“We were just in Manchester last month. It was great to get to play in the UK and come and see our audience there. When we were on the road with ‘Sabbath a lot of our audience wasn’t able to come and see us, or wanted to shell out to see ‘Sabbath too, you know. So we were really happy to come back and see our fans.”

How does touring the UK differ from other parts of the world for you?

“Well, each country has its own ethos in general, you know. All kinds of languages and cultures obviously play a big part in the differences. But the UK, that’s a special audience for us because we broke there first. We played in London and then our first UK tour, I remember we were opening for Judas Priest. That was our first time coming over and you really embraced us and we haven’t forgotten that, we love coming back and playing to the really special people there.”

So, how good does it feel to have such a great spot at this year’s Kendal Calling Festival? You’re really high up on the bill.

“Now those sorts of gigs are really big deals for us. To be on a good billing like that at such a great festival is a real shot in the arm and a reminder that we’re still making progress and we still have so far to go. It shows us that we’re still on that path, with no reason to rest on our laurels. It’s the same thing as writing records, it doesn’t get old because you’re in a constant state of self-improvement and self-reflection. We want to prove to ourselves who we are, and think about that collectively and individually. So, this year with all the great things that are at foot for us with releasing a new record and getting all these new experiences, playing the festival is very vital to our band, artistically and physically.”

Another great thing for you guys this year has been the recent success with single ‘Do Your Worst’, which has gone to number 1 in the US rock charts. How does that feel?

“It does feel like a success yeah, because it is. It’s something new for us and it’s great to get that kind of recognition. 99% of musicians in the world don’t even get to play live or go on tour. It’s just a huge privilege and every time our career gets bolstered with a new opportunity, it galvanises the prospect of us being able to get back into the studio. It makes it all the more likely that we could have a second number one, or that we can get back in the studio even sooner. It means we can have more support for our career and it increases the livelihood of the survival of our band.”

“Oh goodness, let me think about that. That’s an interesting question. I think whatever you’re going through in your last period is going to inform where the writing comes from, you can only write what you know. I think that partnering that were a lot of records and being with Low Country Sound (record label), who were really good with me. Everything just seemed like it was on the table to give us an opportunity to go to the next level. We were working with our long time producer Dave Cobb and thought, okay we need to really dig deep. Not that we haven’t in the past, we’ve given everything we have each time. But, with ‘Feral Roots’ we gave ourselves more time to actually make and write the record. Accumulatively we were in the actual studio for right around three weeks but we allowed ourselves some relaxing periods to reflect on the art we were creating. Scott (Holiday) and I really wanted to go somewhere else that we hadn’t gone before, and I believe that we did that. Especially on the title track and ‘Shooting Stars’, as well as quite a few other songs on this record.”

Are you in charge of the songwriting or is that shared throughout the band?

“I’m in charge of the majority of our songwriting, particularly the lyrics. Scott’s my writing partner though and we collaborate. But the majority of it is on my shoulders. Not that I’m saying the other members of the band aren’t capable of it, they certainly are. I’m proud to say that the band is comprised of extremely talented people. But I’ve been a songwriter since I was a kid, it’s kind of my main thing, and I’m the one that has to sing those songs, you know. When it comes to lyrics it makes sense for me to do it. But it’s really just Scott and I that do the writing.”

The band will soon be embarking on a North American tour, but what are your other plans for the rest of this year?

“Yeah we have the upcoming American tour and then it’s likely that we’ll be coming back to the UK and Europe. With the success of the record and the exposure that it’s given us, we’re getting more and more offers right now, but the actual scheduling still has to be determined. We’ll launch another single and all of that stuff. So yeah, after that we could possibly come back to Europe and England in the fall. I think we’re gonna ride this record for a little bit, but hopefully not for too long because I want to get back in the studio and make another album.”

Are there any modern bands that you or the rest of the guys are a fan of right now?

Yeah, there’s a lot of great artists out there right now that I’m a fan of. Just about anything by Fleet Foxes I end up loving; I love everything they do. Anderson Paak’s new album ‘Oxnard’, I think is really inventive. There’s just more people taking more chances now, which is really exciting. People like to talk about the collapse of the music industry but I think that the power is now more in the artist’s hands. The internet has actually been a great creative tool, putting artists in contact with each other, very helpful. I’m very hopeful and I’m very optimistic when it comes to the future.”

“I would say, probably the title track of the new record. I think the title track has something that no other Rival Sons song does. It’s great to play live for people. The high energy chorus coupled with the folky verses and the bridge, I love it. The great little instrumental flows on that track are just incredible. I love to play it, I get to play acoustic guitar on it and that’s a real joy. When we play it the audiences have responded and been incredible for us. That along with ‘Shooting stars’.”

It’s been a pleasure to talk to you, thank you very much.

“The pleasure’s mine, you have a good one.”

Jay Buchanan certainly was a pleasure to talk to. He seemed very happy with the position his band are in right now. Though it would difficult to be disappointed with the way things are going for Rival Sons at the moment. It looks like the band will continue to grow at a rapid pace, as they have since releasing ‘Feral Roots’ earlier this year.

Listen to chart-topping ‘Do Your Worst’:

Photo by Jimmy Fontaine, find him at his website here.