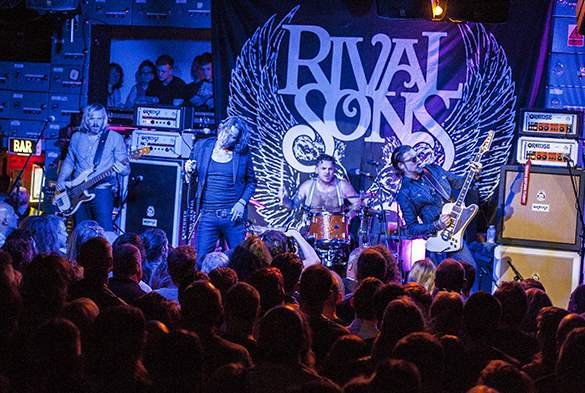 Rival Sons made the surprising choice of the rather bijou Manchester Gorilla for the final gig of a short tour of smaller venues before heading to Download and the Isle Of Wight Festivals. Set up pretty much as an opportunity to launch their impressive new album ‘Great Western Valkyrie’ and combined with an appearance in the city’s HMV store earlier in the evening, they gave the lucky fans who made the show a rapid sell out, something to remember.

Supported by the impressive Jameson – just him and a guitar and a short set of emotive songs, plus the devastatingly fresh faced four piece Crystal Seagulls who are billed as more indie rock, Rival Sons delivered an intense and exciting set, displaying exactly why they’d been Classic Rock magazine had picked up on them as a major breakthrough artist. 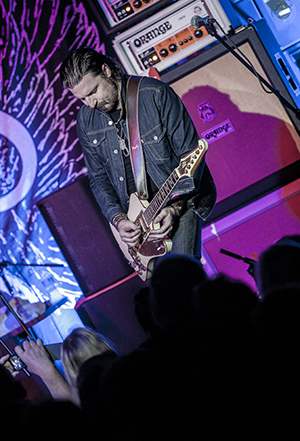 When the subject of ‘British Values’ is one of the current political hot topics, there can’t be anything which is much more British than hard edged, raw and bluesy rock. Of course, the delivery pulls on the American West Coast influence, but their music harks back to the heady days of the arrival of the likes of Led Zeppelin and their blues influenced arrangements.

Guitarist Scott Holliday takes on the role of sonic architect with an extensive pedal board to die for whilst front man Jay Buchanan immerses himself in the waves of blues drenched and distorted sound in between his gut wrenching and howling tortured vocals, inviting you to close your eyes and join him in travelling back to the British rock invasion of the late 60s.

That’s not to say that they create a retro or old fashioned sound; it’s a contemporary take championed by the likes of Blues Pills and Black Country Communion – a homage, if you will, to when times were full of excitement, invention and musical discovery. It’s a classic sound and attitude which is refreshing to hear make a return and yo gain recognition and popularity. What Rival Sons provide is a 21st Century  framework in which to package their art and apply the solid principle of, if it ain’t broken why fix it.

With the gig selling out quickly and the room packed to the rafters, it was a hot one. The fact that the World Cup’s opening match was kicking off at the same time in Sao Paulo led to the thought that it would have been ideal preparation for Roy Hodgson’s men to get down to a few sweaty Rival Sons gigs to acclimatise. Although it looked like smoke or dry ice rising at the back, it was more likely steam from the heaving crowd added to the heat which was coming from the band, and an almost perfect type of venue suited to the dense torrential sound pouring from the stage.

There’s also been a change of image with  the standard long haired rock look giving way to a striking slicked- back and distressed western image – maybe even with a little Moonshine on the rider, they looked as though they’d ridden into town and were ready to take no prisoners.  A triple whammy opening of new songs from ‘Great Western Valkyrie’, their fifth album released this week and hitting the top ten, earned a terrific ovation which threatened to go on, and on, and on, and which set up what was to be a fantastic night. The combination of ‘Electric Man’, ‘Good Luck’ and  ‘Secret’ was as good an opening 15 minutes as you’re likely to see or hear. ‘Secret’ in particular surpassing the atmospheric album version, all four working up a head of steam and drummer Mike Miley discarding the first of several sweat-soaked towels. 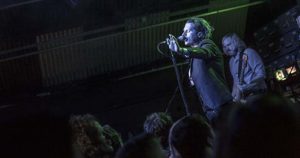 What’s a pleasure to see and hear is that Rival Sons know exactly when not to play. ‘Play The Fool’  was typical of those songs which leave a pause between the chunky riffs. They adopt a no frills policy – what you might accurately term all killer no filler. The only exception was the concession to Scott Holliday’s aural guitar creations in ‘Manifest Destiny Part 1’ at the start of the encore which led into the monster riff and bordered on psychedelic workout.

As so often with a band whose singer and guitarist are very much to the fore, there’s a rhythm section which does what it says on the tin. Bassist Dave Beste, blond Keith Lemon-styled locks blowing in the on stage air con fan was in stark cool contrast to Mike Miley; dressed in heavy braced trousers and soaked in sweat from the off, he put in an Olympian effort behind the kit.

On a night which focused on showcasing songs from the new record, and mightily impressive live outings they were too, the older material led to enthusiastic audience participation on  2011’s ‘Torture’, joining and singing the chant during the middle section, whilst  ‘Jordan’ gave a slight break in both the pace and volume levels.

Cherry picking a selection from ‘Head Down’ and ‘Pressure And Time’ to fill the gaps, the encore was similarly highly charged with the latter’s title track ending the show with an anthemic ‘Face Of Light’. Some might have baulked at the band heading off stage after an hour before returning for a lengthy encore, yet pound for pound it was a hands down win for quality over quantity.

Earlier in the evening they’d pressed the flesh with a live session and a meet and greet with fans in the city’s HMV store. Lucky fans indeed, as at the rate these guys are making waves and their popularity continues to rise, in store appearances may well be a thing of the past. However, they’ll be back on tour in the UK in December, the Manchester date just across the road at the larger and more plush Ritz. Anyone wondering what all the fuss is about is strongly encouraged to get down to their local venue and check out a band which is about to go large.

All words and images by Mike Ainscoe. You can find more of Mike’s writing on Louder Than War at his author’s archive and his website is www.michaelainscoephotography.co.uk