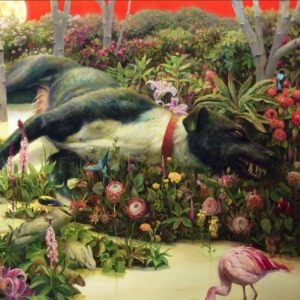 Rival Sons are back with an album that takes the modern radio-rock sound and elevates it to a whole new level. Feral Roots doesn’t shy away from the bands older influences and keeps the rawness of the band alive and well but adds a more polished production and ultimately packs a superior sound.

The band’s move to a major record label could have been potentially worrying news to fans of the group but this album is everything they could’ve hoped for and more. Jay Buchanan’s vocal delivery is powerful and flawless throughout the album. Scott Holiday’s guitar riffs are fierce and varied and the crashing drums are expertly placed into position on every track. This is all wrapped up in a modern-sounding production that allows the band to feel more relevant than ever before.

In terms of songwriting, it’s hard to find a past Rival Sons record with the same calibre as Feral Roots. The choruses sound huge on songs Look Away and Too Bad, both packed full of fuzzy, hard-rock guitar tones and some of the best vocal execution you’re likely to hear for quite some time.

Lyrically the album mostly seems to conjure up it’s ideas from a relationship that’s come to an end. Though the words on this record are fantastic and certainly seem to be stacked up in a way that plays out in a more traditional songwriting sense than that of the band’s previous work, Jay Buchanan could literally sing anything at this point and make it sound incredible.

Lead single Do Your Worst revels in its modern approach and kicks off the album with high degrees of ferocity and carnage. The guitars are thunderous and the chorus, which features a chanting type of sound is victorious in every aspect of it’s recording. The production doesn’t make the band too squeaky-clean but, rather makes the music sound tight and keeps some of the more outrageous instrumentation in check without completely taming it.

End of Forever sees the band exploring a darker side, similar to that of 2014’s Great Western Valkyrie. The instrumentation takes an extremely heavy turn during the chorus and the backing vocals sound haunting next to the intense lead delivery of Jay Buchanan. Backing vocals are actually something Rival Sons seem to have discovered the importance of on this record. Most songs are backed-up with a harmonic performance, none more impressively than Shooting Stars. This song is filled with a gospel-choir kind of vocal throughout it’s entirety. It’s completely different to anything else on the album and shows off the bands soul roots and inspirations. Stood by Me is further evidence the band is pulling from a huge range of inspirations on this record. It sounds as if it’s been pulled straight from the 60s and would be more than welcome on a Rolling Stones record of that era.

The album oozes with style and it’s never afraid of jumping from one sound to another. ‘All Directions’ sounds beautiful, it sports angelic vocals and dreamy, chiming guitars. This is until around the mid-point of the song where it takes itself down another road and blasts through the remainder of its run-time. This song is most certainly one of the finest moments on a record filled with highlights.

Rival Sons’ sixth studio album is a success on so many levels. It’s the band at a point where they aren’t afraid to embrace modernised inspirations while holding on to everything that’s got them to where they are today. You need to hear this album and when you do you’ll thank yourself for doing so.