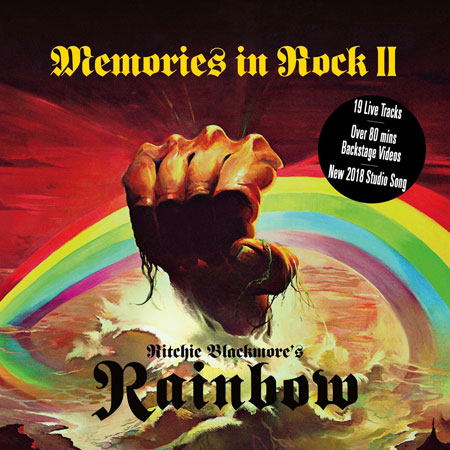 Another live souvenir of the return of Ritchie Blackmore and his Rainbow guys to the stage.

Allow me a brief personal indulgence here as I go back some way with the man in black. Revved up by the older kids in school poring over the incredible Rainbow Rising album back in the seventies, it was easy for a fledgling rock fan to be seduced by the cover, the Blackmore/Dio combo and the Rainbow Onstage images, the giant rainbow and epic songs. One of my earliest gigs was Rainbow at Manchester Apollo (albeit in the Graham Bonnet incarnation); Ritchie even trashed his guitar in the encore. Then there was the live return with Deep Purple on the same wet day that U2 played Milton Keynes Bowl and Purple and U2 fans mingled, mods and rockers style, but without the bravado, at various motorway stop off points on the journey to their destinations ultimately followed by another fallout and the evolution into Blackmore’s Night. The dalliance with minstrel rock might have divided fans but in hindsight, there’s no doubting Blackmore’s commitment having never followed the easy path. Life has been a series of challenges and RB, a mercurial character if ever there were one.

Perhaps it should come as no surprise that the initial dipping of the velvet clad toes into the waters of hard rock began with three dates in 2016 and commemorated in the Memories In Rock album and the Live In Birmingham album. Enough to realise there was still a market for the Blackmore return to hard rock. A market that would swallow two live albums from three gigs.

2017 saw a return trip and another live album. Just the one this time, but one with a sleeve dominated by that iconic Rainbow Rising image and the classic Rainbow lettering, it feels almost like ’76, but decades on from those heady days, a lot of water has passed under the bridge. We’re all a lot older and our parts don’t move as fast although Ritchie has much better hair these days. He’s surrounded himself with some frankly anonymous musicians, plus his wife to do some backing vocals and a singer in Ronnie Romero who ticks all the boxes of the standard classic rock singer.

The setlist juggled from the first set of dates as Ritchie has said, less of the Purple material and more of the Rainbow – Highway Star giving way as opener to Spotlight Kid although missing is the classic “I guess we’re not in Kansas anymore” intro and preluded with the band crashing into their ‘somewhere over the rainbow’ passage. Shifts in the set see a range of numbers making their way in as the purple tint gets lighter. Having said that, Soldier Of Fortune has been hijacked by both Blackmore and Coverdale in their solo guises and together with Temple Of The King from the first Rainbow album and Blackmore’s tribute to Jon Lord, Carry On Jon, unfortunately named not after, but invariably associated with the saucy British film series, it sees the set briefly back in minstrel territory.

The album does its best to maintain a balance as AOR hits duel with lengthy classic Rainbow tracks. There’s plenty of guitar doodling too with Difficult To Cure testing the stamina at a quarter hour and Mistreated and the three minute rock single Black Night both running beyond ten minutes and featuring plenty of that ‘so quiet that you almost don’t know he’s there’ guitar noodling. Easy to switch off as any dynamics, drive and excitement dissipates into the ether. Years may pass and whilst some things change, some remain the same.

There were those who were just glad to see him plugged in again and hard rocking and thankful that they were there one more time. Others, they may have been curious fence sitters who took the whole thing with a pinch of salt and whose expectations were realistic.

Does it really matter who’s in the band? Basically no, it never really has, apart from the singer who gets he inevitable comparison with Ronnie James Dio. No denying that Ronnie Romero gives the songs his all, as does Adam Lambert with whatever passes for Queen, but it still feels a bit X Factor.

While Ritchie has called this the best version of Rainbow ever, some may genuinely wonder if his marbles have been spilled or whether he’s just talking up his new band with the enthusiasm a fresh approach brings. The new song that forms part of the set, Waiting For A Sign, is a mid paced pot boiler, nothing exciting or to get worked up about and pretty much summing up the whole experience of the electric Blackmore forty years on.

You can hear the first new Rainbow song since 1996, Waiting For A Sign here: