Home Music Bands The Rise of Heavy Drapes: the new wave of punk steps up...

I wrote the very first article about Leith band Heavy Drapes about 18 months ago now. In the interests of openness, impartiality and veracity I should state that I now count them as friends. I’ve hung out with them, played gigs with them and got into all sorts of near-trouble with them over this last year and a better bunch of rogues you couldn’t meet. I didn’t know them at all when that demo CD arrived through the post and I then composed that first article for LTW that seemed to give them the spark and impetus they deserved pretty much blind; we’re now pretty close although Dee Liberate (Garry Boreland) and I are as likely to end up at loggerheads in an argument as we are to agree about the state of the punk world.

It’s been quite a journey for them. They had formed the band a few years ago and that line-up dissolved after a few shows (including opening for the NY Dolls) following a chemical-fueled fracas where Liberate had been thrown out of his own gig. Old tensions seemed to have quickly arisen from three members of the bands previous life in Baby’s Got A Gun who were a Warner-signed act that took the fury of the Pistols and melded it to classic rock and a more mainstream sound.

Things settled a few years after the split and the band found a common ground to continue and since their second reformation two years ago, they’ve been on a rapid upward trajectory that has taken them from playing to twenty people on a cold night in Paisley to incessant touring and a well-deserved spot on the Rebellion Festival Empress Ballroom stage on this years line-up. They’re on at 2pm on the Friday, there’s little on any other stages at that time that I would consider competition to them and if you’re there, there’s no excuse. They destroyed the Introducing Stage in 2016 and Rebellion organisers Darren and Jen Russell have recognised that the bigger venue is probably gonna be required.

They polarise opinion, that’s for certain;they have the arrogance and chutzpah of a band that know they’re good. That self-belief sometimes doesn’t go down that well in the idiot-village of some of the punk scene as they’re seen as a little too “rock star” and glamorous for a scene that, lets face it, originally thrived on nasty-star quality. What would you rather have? A band that look like Kenny Everett Show sketch (as many of the “let’s dress up in our punk uniform” bands do) or a band that ooze the charisma, the arrogance and the black magic of prime Pistols or Stooges? I know which one I’d choose…. 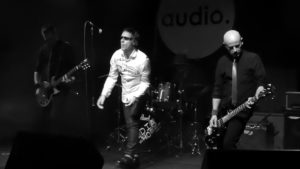 The other thing that gets up some people’s noses is the music; it is powerful, it is catchy, it’s vicious,  it is, at times, elegant and some folk would have it that they’re a little bit “Oasis” in the song stakes. Who gives a monkeys? Heavy Drapes have listened to all of the good music throughout the decades and the influences are clear. Oasis? Yep, that’s one of them.

Of course, that’s NOT all there is. This is a band that channels the purity of the classic punk bands and those same bands wellspring of the MC5, The Dolls and The Stooges and hauls it into the 21st century and adds a modernity that is positively shiny. Liberate describes the band as a “gleaming punk rock machine”and that is as good a description as I can try to match.

On the subject of Mr Liberate, he’s as controversial and quotable as his band are explosive; interviews invariably end with him offending someone or other from the punk scene and that’s all part of the attraction. I call him The Leith Lip. More people should, too. 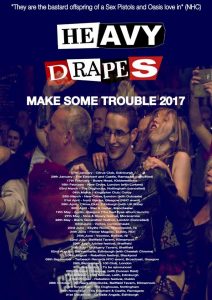 Heavy Drapes are a band that stand against the conformity, the conservatism, the uniformity and the lack of ambition of many of their contemporaries. This is a band that want to be famous; not for them a life of playing shitty gigs to 30 people for as long as it takes for them to get fed-up with that. Heavy Drapes believe that they were made for festival stages and bigger things and no-one can deny them that dream given the work they’ve put in. They are out there playing all over the U.K. every weekend and making friends (and invariably, enemies) as they go. They’re a tight, focused unit and like The Beatles in Hamburg, they certainly “mach shau” every time they take the stage.

They’ve been on the Vive Le Rock magazine “Best of 2016” cover CD; they’re recording their debut album with Mark Freegard who produced The Manic’s “Holy Bible”; they’ve had glowing press wherever they’ve been mentioned and they’re now taking the big stage at Rebellion Festival. Liberate often tells me that they’re literally on the verge of killing each other or splitting up almost weekly. He thinks it’s a miracle they’ve got this far without flaming out but I reckon that the flaming-on all takes place onstage and the bond between Richie, Billy and Jerry and himself is evident when they play.

There was controversy, of course; a single cover ended up causing a bit of a fuss with lots of keyboard warriors due to the artist inadvertently highlighting the letters “he rape” in the band name although this was quickly withdrawn and the “banned” offending single becoming a collectors piece. Sometimes even your mistakes come good, I suppose. The band are clear that no offence was intended and as they say, all bad publicity ends up being simply publicity.

The album is hotly anticipated. Freegard is known for his raw and visceral style and that’ll suit the band; they don’t require strings and keys and massed choirs on these songs and they know it. They’re with Tarbeach Records, a little boutique label out of NYC and the eccentric approach of the label is perfect. They’ve been left to develop without interference and that has clearly helped although the very focused vision of Liberate for the band has spurred them ever onward.

They’ll be in your town soon if you’re not at Rebellion. Do yourself a favour, see the new wave of punk before they either become massive or self-destruct as Liberate so often predicts.

All words by Joe Whyte. You can find more from him in his author archive.