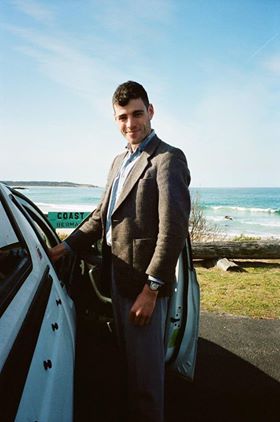 The purveyors of quality Australian indie pop were struck with a deep tragedy a few weeks ago when band member Zac Denton (pictured) died suddenly due to complications surrounding a cyst on the brain. At just 24, Zac was much loved, and had a remarkable and prolific career, recording 10 full albums with The Ocean Party, Ciggie Witch and Pregnancy.

The band have made the download of their brand new album, Oddfellows’ Hall (Emotional Response Records) available for free. They would love it if you honoured Zac’s passing by sharing his music with your friends. You can listen here:

The Oddfellows’ Hall is the eighth full-length release from The Ocean Party, a six-headed song writing partnership, have been together more than a decade, honing their craft and exploring their musical and personal worlds. The Oddfellows’ Hall is the work of six life-long friends who enjoy the connection and comfort of being able to dissect their life experiences together through their music.

With each member approaching landmarks in their life the album can’t help but reflect a cross section of late twenties anxieties, excitements, freedoms and losses. At the point of recording the lives of the six members were in neat contrast: expectant parenthood versus dissolution of a long term relationship; commitment to new ideas of the self versus returning to a foreign country twenty years since emigration; living in your car versus finding your place.

As is typical of the band, The Ocean Party opted to record the music in a concentrated space of time, and for their location chose a community hall they had spied while touring. The Oddfellows’ Hall in the rural New South Wales town of Yass lent a familiar homeliness to a band whose ties wind back to high-school in rural Australia. Set up in the open space of the 1880’s wooden-floored community hall the band introduced each other to their material for the first time and came away a week later with The Oddfellows’ Hall.

The passing of Zac Denton adds a new weight to the proceedings. Band member and brother Lachlan Denton completed this video just days before Zac’s passing. (It features Lachlan). Louder Than War are pleased to premiere the video What Its Worth here:

Stewart Anderson (Emotional Response Records/Boyracer) said: “Zac was a lovely human. Super talented and gentle. It was a horrible unbelievable shock to everyone that knew him. We have such lovely memories of the time he visited us last year, played with our kids, recorded some songs, hand painted some record sleeves in our back yard. So sad.”

The band will be starting a short tour of Australia soon. Check out dates on their Facebook page