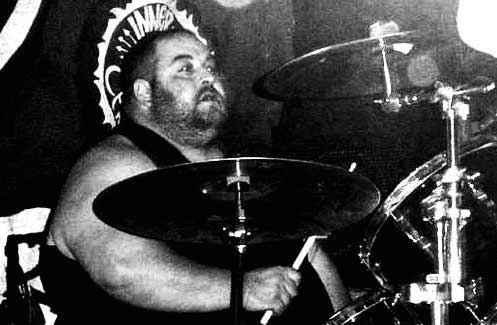 Punks around the world were saddened at the news yesterday of the death at the age of 49 of Francisco “Paco” Carreno.

Paco was a man who redefined punk rock drumming with the band’s Conflict and Inner Terrestrials. Paco joined Conflict in 1981 and played with them across the world and on a slew of records including arguably one of the fiercest punk albums to ever be released: The Ungovernable Force.

To say Conflict were influential is an understatement. His drumming style was powerful and technical – sometimes throwing in extra beats where you wouldn’t have thought there was room for any – but to watch him live was always amazing as he made the powerful onslaught seem so effortless – as if he was brushing away mosquitoes.  When Paco played the drums he wasn’t just hitting things, he was playing an instrument that could provide melody as well as rhythm and several Conflict songs were based around individually recognisable drum patterns.  In 1994 he formed Inner Terrestrials with whom he again released two fine albums gaining a steady reputation on the squat and festival circuit.  His involvement with both bands in recent years had been affected by ill health.  Other bands he lent his talents to included Riot/Clone and Experiment.

Paco was more than a drummer in successful bands – he ran a studio in Brixton, had been involved in the organisation of gigs, and was a face to be seen when other bands were playing in London.  I met him 20 years ago, having grown up listening to his music, and from that point on he was always up for a brief chat if I saw him.  With thousands of friends across the globe he still always had time to stop and chat to people he knew.  Reactions to the news on Facebook from the punk community frequently described his personal attributes as much as his role in seminal bands – there’s a lot of love out there for him.

We suggest you grab a copy of one of the albums he played on, crank the volume up and listen to those beats.

Our thoughts go out to his family and close friends.