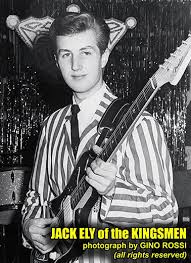 Jack Ely may not be a  household name, like Elvis Presley, but his voice echoes throughout rock n roll forever as the larynx that wrapped itself around the most famous version of the ultimate building block of electric culture ever, Louis Louis.

His band, the Kingsmen heard the song on a jukebox when they were touring, covered it and recorded it in a fifty dollar session where Jack’s braces and the fact he was singing into a mic hung from a  ceiling and not on a mic stand gave the song its famous slurred delivery- slurred delivery that is at the heart of great rock n roll and copied endlessly by every garage band droog and every rock star who knows that correct pronunciation is the death of proper rocking communication.

Louis Louis is perhaps the ultimate rock n roll song and has been covered thousands of times. The Kingsmen didn’t write it but their 1963 version that hit number 2 in the charts has defined it for ever.

Every garage band has learned its rudimentary chops and every skinny teenage singer with a howling wolf voice has yelped along to its perfect vocal line. Born in Portland Oregan in 1943 Jack’s delivery is one of the fundamental building blocks of rock n roll, a voice that echoes through the decades with its whiney necessity that is so perfect, the longing and the awkwardness and the brattish leer that is at the heart of perfect rock n roll.