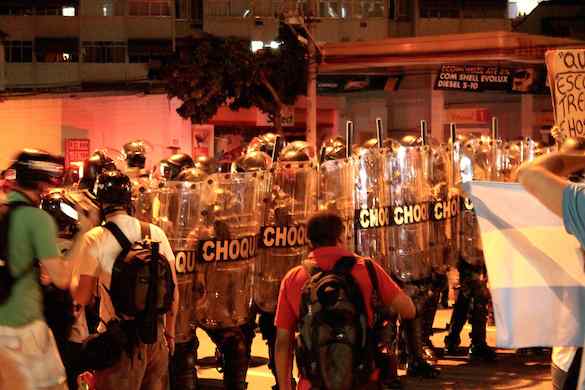 Ruth Daniel has been reporting for us from Brazil, hosts of the current world cup of football. Last week we ran an informative and brilliant piece of writing by her in which she filled us in on the street protests in Sao Paulo for the first match of the World Cup. Read that piece on this link. Today, in her final piece for Louder Than War, she tells us how Rio is rioting while the world cup continues – something noticeably absent from news stations  the world over.

It started out with a handful of people gathered in a square in Rio, near to the stadium. It felt more relaxed than Sao Paulo, the police were without riot gear and collected informally around the protesters. A few art installations criticising the World Cup were placed around the square. After a couple of hours, more people had gathered holding flags and banners. We had noticed that riot police were located at the end of surrounding streets. 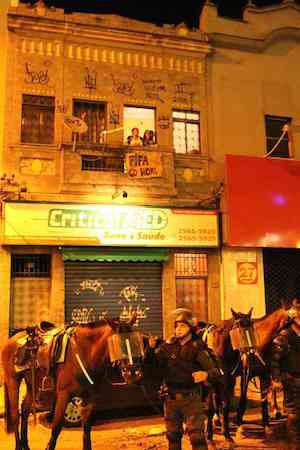 The protesters began to mobilise and moved together along the streets, surrounded on all sides by the policed. The protest was allowed longer than in Sao Paulo before any police intervention. Night fell and as the protesters edged nearer the stadium, things began to change. Protesters used their social media – Whatsapp, Viber and other communications tools to pinpoint the police lines. The Blackblock protesters were present. Trying to outwit the police, the protesters ran to try and advance their position before the riot police lines arrived.

As the protest neared the main avenue to the stadium, teargas was suddenly fired into the crowds. It sounded like a war zone. Protesters picked up the canisters and threw them back onto police lines. The police advanced very quickly. I took cover in a petrol station. The police fired directly into the station. Two teargas canisters filled the air. I was trapped, but ran through the gas to take refuge in a local bar, where the locals were fighting and quickly closing all the shutters.

The streets looked like something out of a science fiction film. Hundreds of police, against around 300 protesters. The protesters continued to battle for the following hours. We heard from Vice journalists that real guns were being used – an undercover police man had fired rounds into the air. I even saw police with a silver machete.

It was unrelentless and unmeasured violence from the police. It was once again terrifying. I wonder how long the protesters will continue to protest, given the policing policy.

Seeing this first hand has enabled me to see the power of capitalism and that the state will do all they can to protect the values of the rich and FIFA, presenting a skewed image of Brazil. The bright colours of football shirts and flags from the stadium are in such extreme contrast to the war zone on the streets. The rise of the citizen journalists is changing that and they are getting their images of the real situation on the ground out to the masses – via channels like: midianinja.org.

I’m home now and hoping all my friends stay safe during this incredibly tense time in Brazil.

~
All words by Ruth Daniel. More writing by Ruth on Louder Than War can be found at her author’s archive.