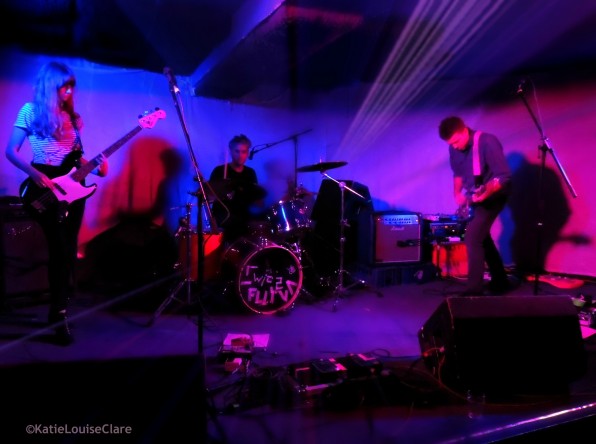 Austin, Texas shoegazers Ringo Deathstarr have been over in the UK of late on a tour. Louder Than War’s Katie Clare, who last spoke to them for us in Japan, caught up with them once again a couple of weeks ago just before they took Bristol’s Louisiana by storm.

In the UK for the first time since the release of their latest album, God’s Dream, Ringo Deathstarr open their Bristol set with ‘Kaleidoscope’ and we’re treated to a skilfully built wall of noise, a smooth visual performance and a physical one too: the tremors travelling through the floor send pitch-shifting tempos up and down your spine, it’s a groovy little scramble of your senses which continues well into the next day – sweet!

Earlier in the evening: prior to the multitude of good vibrations, appealingly sheltered from the rain in The Louisiana’s back room, the Deathstarr trio and Louder Than War took some time out for a bit of a catch up. 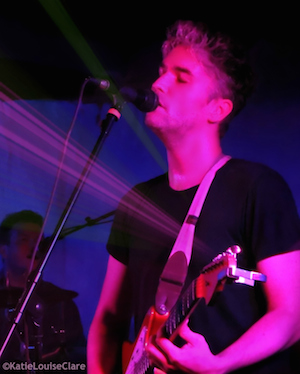 Elliot: I just found out Hello Kitty isn’t a cat, she’s a little girl and she’s a friend….

The only way I managed to stop buying Hello Kitty stuff in Japan was to get a Hello Kitty tattoo.

Alex: I think I’ll call my next cat Charmy Kitty.

Elliot: How did we get here?

Japan! The last time we spoke in Tokyo there was no hint of Gods Dream on the horizon yet it appeared or at least news of its release was announced not long after – so how did Gods Dream come about?

Alex: Vinyl Junkie wanted us to release something.

Elliot: A year ago we were here (in the UK) we got home and everything started happening immediately.

Daniel: In a way that all seems a long time ago.

Alex: We were a little caught out at the time.

Everything must have been okay Gods Dream is great.

Elliot: Have you seen a copy of the UK release one of the songs names is wrong: See You is called Over There. There was a rough draft of the art work which made it through at the time that art was put together we didn’t know what the song was going to be called.

Your catalogue of tracks is technically increased by one now then. How difficult is it deciding what to play each night?

Elliot: It all depends on how long we have to play.

Alex: Usually we have too many songs for our allotted time. It’s like we just put together this set for a 45 minute show and there are 5 or 6 songs that I like and want to play that are not on there.

Daniel: It is hard for us because of the guitar switches.

So while you might want to play this this then that it might not be possible if it doesn’t have flow?

Alex: Yes we have to play songs in a certain order so all the songs on the one guitar are done and then switch and do all the next songs on that guitar.

Elliot: I think thirteen songs in 45 minutes is pretty good.

Alex: We are going to try three new songs tonight.

Elliot: Daniel’s going to sing and play guitar tonight we are going to switch roles.

Daniel: I’m looking forward to it is going to be fine. I used to be more nervous I was in another band were I sang and played guitar I sucked more back then but we have practised a lot so. Maybe it’s okay to be a little nervous that would be good but to be really nervous man that sucks.

Alex: Some days I get really nervous, I don’t know why.

Elliot: I used to throw up before shows.

Alex: I don’t know what the trigger is just sometimes suddenly I open my mouth to sing and my voice comes out shaky.

Elliot: When I think nobody gives a shit it is harder. When we play in Japan even though it is super quiet I know people came to see us so it’s okay. But in other places sometimes people can be standing there just staring at you and they can look so angry.

I expect you win them over and whip them up a bit.

Elliot: Our shows used to be wilder I guess. I used to instigate a lot of that but now my guitars are just too broke I can’t throw them into the crowd. The last Peter Murphy tour … … I hurt an old lady.

Elliot: I was like ‘I’m going to fucking do it’ because everyone was just standing there – waiting for Peter Murphy and looking angry. So I just jumped out there with my guitar flaying it around and this old lady got hurt, I did say I was sorry.

Alex: It was in this tiny club in Kansas City and it was so hot sweat was just dripping off my face onto my bass and everyone on the front row was so mad because the show started late and they were taking it out on us screaming and banging on the curtain ‘Fucking start already. Fucking start already’.

People do love to vent.

Daniel: Everyone gets pissed off at some time.

Elliot’s Weird Al t-shirt and the thought of people being pissed off is making me think of one of his songs from his new album.

Elliot: Yer I have like Weird Al since the third grade. I did like that one First World Problems the guys pissed he’s got too much food for his refrigerator. He had this dog and I was hoping he’d throw it out the window ….. Have you seen it? Okay right there is this Weird Al movie called UHF and Weird Al is in the apartment of this guy called Rahul and Rahul says ‘Today we are teaching poodles to fly’ picks up a dog ‘right 1 2 3 …fly’ throws the dog out the window and you hear the dog yelping and landing as Rahul turns to camera and says ‘It takes them a while for them to get it’ cut to the pile of poodles outside.

Alex: I don’t like the sound of that at all.

Elliot: Well I just thought he might pay homage.

The last release was unexpected is that how the next one will come along or are there already plans?

Alex: We have some songs.

Daniel: We can do another album.

Elliot: For sure. What do you want to happen?

Elliot: We’ll not be one of those lame bands that say ‘We are breaking up now – thanks’.

Alex: We still have so much more music we’ll be doing this when were 100 years old.

Daniel: If we stopped doing this we wouldn’t be together. I’d have to get a regular job and that would suck.

Plus you still have ambitions to fulfil.

Alex: I want to play with Dinosaur Jr.

Elliot: I want to be part of a Chris Martin side project.

Daniel: I want to write a song a lot of people like – no no like a lot more people – a song that no one likes at first but they hear it all the time and then everyone likes it.

Take a moment to catch up with Ringo Deathstarr at their new official website (ringodeathstarr.org). Here you can check out news, tour information and their store where Gods Dream (CD, LP & DL) is directly available to buy as is other music and merch. The band is also on Facebook, Twitter (@ringodeathstarr) and Instagram @ringodeathstarrofficial) where they keep followers up to date with regular posts and photos.