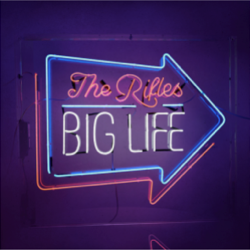 Fifth album and a double album at that from the guitar pop sensibilities of London’s The Rifles.

A band who have had their fair share of brushes with whatever constitutes for the album charts these days, The Rifles seem to be in a rich vein of form in the songwriting zone. Asking the impossible of trying to pick the 11/12 tracks for their new album , they’ve decided to include all 18 shortlisted to make the grade.  “Giving the fans as much as possible” is the maxim which is fair enough although some may question  the need to spread the songs across two discs when they could justifiably have fitted the  hour’s worth of music onto one disc. The status of delivering a double album is still strong.

And while we’re on the theme of clichés, there’s a strong sense of ‘if it ain’t broken why fix it?’  The Rifles have a model which works  and which once again results in a steady stream of summery pop songs which across the two discs, merging and blending into one another so you’re unlikely to notice any particular distinction between the 18 numbers. There are a  couple of deviations from the bright and cheerful in the vaguely melancholy ‘Johnny Was A Friend Of Mine’ and the softer acoustic ‘Young For A Day’ complete with children’s choir, which offer some suggestion  at the end of disc one that there is life beyond the eternally optimistic guitar jangling three minute sketches.

The second set does give more in terms of variety – ‘Victoria’ gets the acoustic treatment again and the power pop of ‘Never Been That Close’ gives The Rifles a nudge towards something edgy. Easy to perm any one from a dozen as single and non threatening radio friendly material. In an overcrowded marketplace with all sorts of similar bands jabbing their hands up for attention, ‘Big Life’ might be one of those which albums, despite an obvious proficiency in hitting the right notes for polished pop hooks,  finds it a challenge  to emerge as something with longevity.

Listen to ‘From The Heart’ from  the album here: