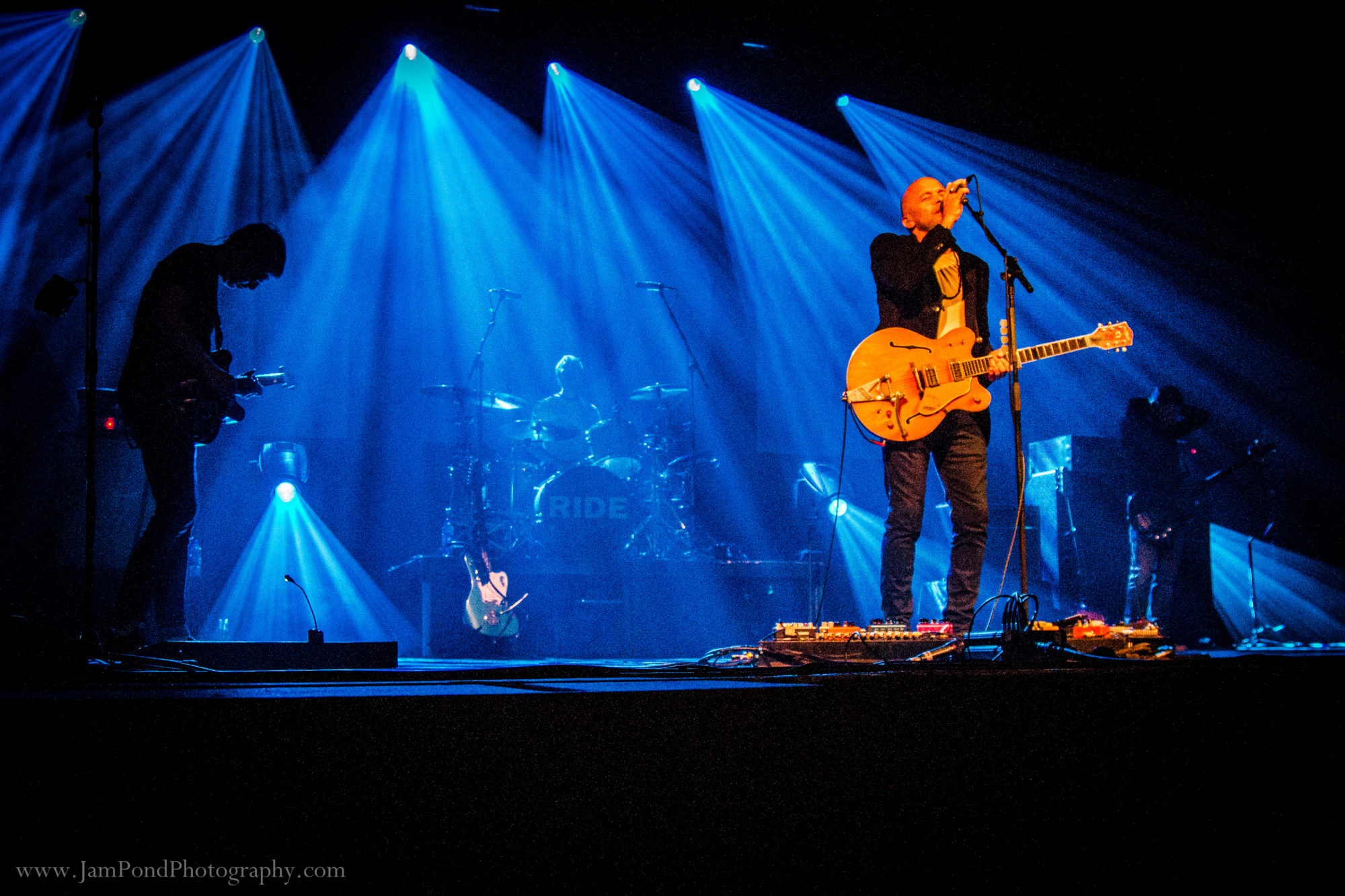 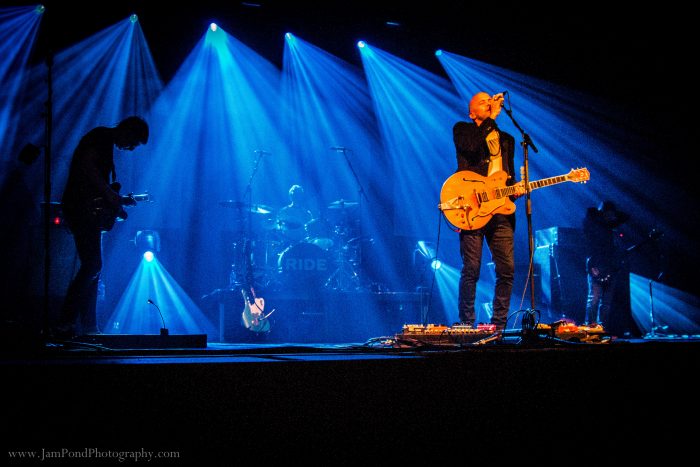 Ride return to Oxford as part of the Weather Diaries tour.

For me, it was an emotional return too. I lived in Oxford for most of the ’80s and was a work mate and drinking buddy of Steve Queralt (bass) before Ride got going.  As a result I can say “I was there” at the early Jericho Tavern gigs before Creation took an interest. I was there too when they broke through in 1989 and started to play larger venues, initially as support, then headlining. And no-one was there when I started to save copies of the front covers of Sounds, Melody Maker and NME, just in case they ever made it big.

I suspect that most of the people at Monday night’s gig also had stories to tell about their early Ride memories. Indeed, I bumped into Mark Taylor, who runs the Ride fanzine/Facebook etc, in the foyer. Mark told me he had been a fan since he went to the January 1989 Oxford gig, but his wife had already got into the band after being at the Jericho Tavern gig in late 1988. Of course, I was at both.

So it came as no surprise that after two or three songs one of the band’s singer/guitarists, Mark Gardener, told us that he recognised a lot of people in the audience (relatives?) and reminded us that it was good to be home. 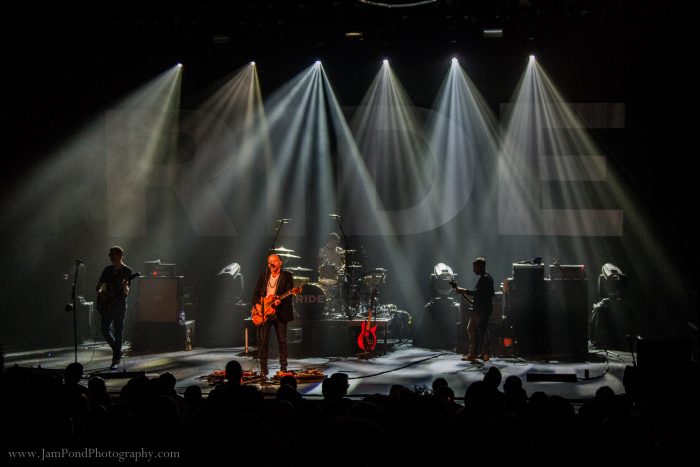 He also told the New Theatre crowd (that we all know as the old Oxford Apollo) how he and Andy Bell had both seen their first gigs on the same stage.  For Mark it was Big Country and The Cult (I was at both – I took my younger brother to see The Cult as his first gig too at age 13). Andy tried to claim the Banshees as his first gig, but corrected himself and confessed that it was actually Aztec Camera.  I was at that one too, as a favour to a girlfriend in return for her coming to see….Level 42 –  not sure why I was at that one.

Time has treated Ride well – they all still look fresh faced despite three out of four having continued to enjoy the ravages of 30 years in the music business – most notably Andy Bell as Oasis’ bass player and Loz Colbert’s time drumming for JAMC.  Mark is probably best known for his solo stuff – and for wearing a trilby hat at the return concerts of 2015-16, which has now gone. 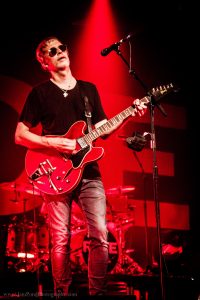 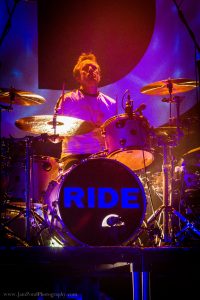 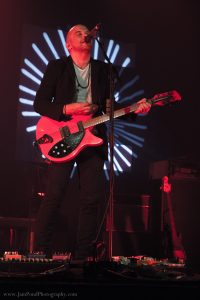 I bumped into Mark at the Jericho Tavern at Christmas when he was at a gig (with Loz) giving moral support to a band he was producing called Temper Cartel.  We had a chat about the old times and what he was up to now – he came over as just a bloke in a pub who was welcoming and friendly. The rise and fall and rise again hadn’t changed him.

It was good to see Steve again too, who looks exactly the same as he did nearly 30 years ago.  Steve must have a cracked portrait in his attic and it was great to see him playing bass on stage in Oxford – something that I thought he had turned his back on.  He has a unique bass sound that has often been copied by the newer generation of Indie bands. Often mimicked, never bettered.

So Ride came on and Ride blew us all away again.  Andy in his wayfarer shades still providing jangly guitar and tight backing vocals; Mark in the centre of the stage, an array of effects pedals at his feet; Steve in the shadows and Loz, who is an even better drummer than I remembered.  Drummers are often overlooked (especially when they are playing behind three of the best indie musicians out there), but Loz really is awesome – and not just because of the start of Dreams Burn Down. 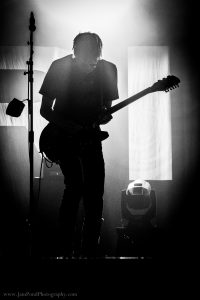 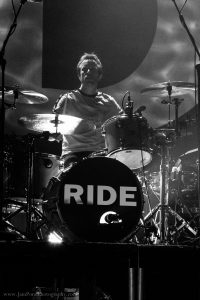 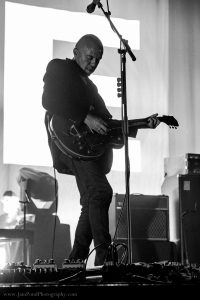 New songs from Weather Diaries are perhaps more reflective than the raw noise of tracks like Drive Blind (or ‘One for the Road’ as Mark introduced it).  After all, these guys are Dads and have mortgage, but they still know how to hold an audience.

Every Ride track does indeed still remain a monument to shoegaze.  The band was often thought of as the Knave to the Kings and Queens of My Bloody Valentine, but they’ve returned from the wilderness to assume their rightful place at the head of the genre. (We’ll let them off that hippy phase they went through around the time of Carnival of Light).

Ride put on a mega show – almost an hour and half.  Before their set, I managed to drop my camera into the orchestra pit, completely breaking a lens in half.  The irony was that the first time I’ve shredded a piece of kit was in genteel Oxford in an all-seater theatre.  But it was worth it.  Memories do fade, but fortunately this is one gig I won’t forget (thanks to a spare lens). 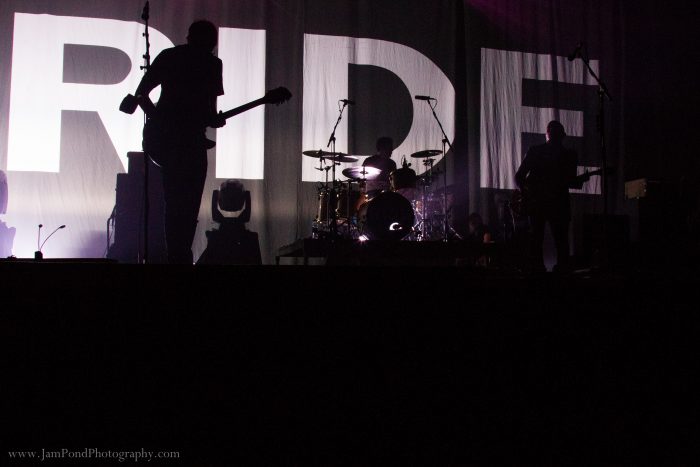 It was good to see Ride again having last seen them in the cauldron of The Roundhouse last year. I’m hoping to get along to the Erol Akan residency gig at XOYO in a couple of weeks.  Ride are a band that has to be heard at full volume and that tight venue will reignite even more memories.

Before I go, I thought I’d just mention something.  Steve didn’t go to Banbury art-college with the others, as is often reported. He was working with me at Our Price Music in Oxford, along with Dave Newton, the band’s first manager and Amy Fletcher and Pete Momtichloff of Tallulah Gosh.  I know, because I was there and I just can’t leave it all behind.