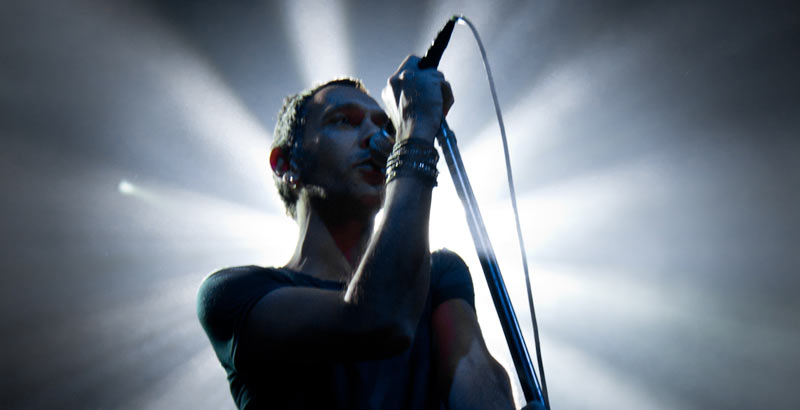 A hometown acoustic show for Shed Seven’s Rick Witter and Paul Banks with support for a couple of their Britpop contemporaries. Sarah Lay reports.

The steam rises from the cooling towers; froth-topped concrete edifices squatting stark on the skyline as clouds mist down toward them. Across the fields, shining with flood water, light bends into the colours of a rainbow. Chasing, the train moves on and the songs of last night and so many years ago echo through the memory once more.

Friday night’s sold out Fibbers’ show was an acoustic homecoming for Shed Seven local boys Rick Witter and Paul Banks, playing as part of Independent Venues Week. Joined on the bill by Britpop contemporaries Mark Morriss (The Bluetones) and Nigel Clarke (Dodgy) it was a night for affirming friendships through singing along to the soundtrack of our youth; one hand thrown up toward the stage and one around the shoulder of the mate swaying alongside.

But, listening beyond the raucous chatter of the crowd and the obvious shimmer of acoustically played pop hits, you can hear the echoes of the songs from the years before we grew up. Simplifying these indie anthems, time having dampened but not diminished the hedonism surrounding their release, allows the influences on them to shine a little brighter. It strengthens the notion that these are the folk songs of a generation; three-minute ballads of modern life to which we don’t just know the words but have lived the sentiment. The strummed guitar wrapping around the sometimes blunt, the sometimes fancifully poetic lyrics of our lives.

The show is opened up by Nigel Clark, best known as lead singer of Dodgy he brings the ’90s big hits with Good Enough and Staying Out for the Summer warming up the crowd for a night of singing along. But he also plays newer tracks and from most recent album, 2012’s Stand Upright in a Cool Place and while the words of these may not yet be written through us, they are no less reflective of the people we are.

Taking on the middle of the bill is Mark Morriss, back out on solo dates in between the two halves of The Bluetones anniversary tour. And he doesn’t hold those Expecting to Fly hits back from the crowd tonight, cutting straight to the money shot by opening with Slight Return.

Getting the one that everyone hankers for out of the way early means that the rest of the set is more appreciated – no one is wishing these songs away because there’s one they want to hear more. It means the literary wordplay of tracks of album tracks like The Fountainhead wind their way around us as we sway, rather than pogo, along.

The influences on these songwriters is directly referenced with Morriss taking on Modern Love. His London drawl a vocal homage to Bowie and its inclusion a nice addition to the covers speckling his set taken from his latest album, last summer’s A Taste Of…. Like those the Bowie cover is presented with a handful of admiration for the greats of the songwriting craft and as much love for another’s music as we have for his.

Headlining are York’s own Rick Witter and Paul Banks. Fresh off the traditional pre-Christmas Shed Seven tour the singer and guitarist present their hits with more mellow, and less bellow for the hometown crowd. It seems that there isn’t a voice that isn’t raised, singing back every word of every song, these lyrics written all the way through each of us.

And it’s with the live performance that it becomes obvious exactly how many big songs Shed Seven, the underrated underdog of Britpop, have. From the early tracks taken from Change Giver to the mainstream pop of Disco Down, each one a people’s anthem charting Saturday nights and Sunday mornings, the greyness of the daily grind and the Technicolor madness of love.

Witter’s affable rock star demeanour plays against Banks’ focused and straightforward style. The frontman banters with the crowd, gently mocking them as they are too eager on tracks like On Standby to wait for the drop. His manner accentuates the fun of the song, exactly what pop should be; something you can sing to, cut a shape to and then get misty-eyed to when you hear it on the radio some years later.

Shed Seven do classic, anthemic, pop and tonight we’re all celebrating that. We spill into the January night and spread across the city to bars, clubs, hotel rooms and homes; to spread the word to the non-believers, yeah. We’re the indie kids all grown up and we know; there’s nothing wrong with singing the songs of our past, it makes the memories flood and that keeps us together.

Britpop may have been industry bluster and a fast burn through the last of the cash but tonight is testament to more admirable legacy; classic songwriting, fine musicianship and tracks that soundtrack the years of our lives.

All words by Sarah Lay. You can find Sarah on Twitter or read more of her words about music on Louder Than War here.