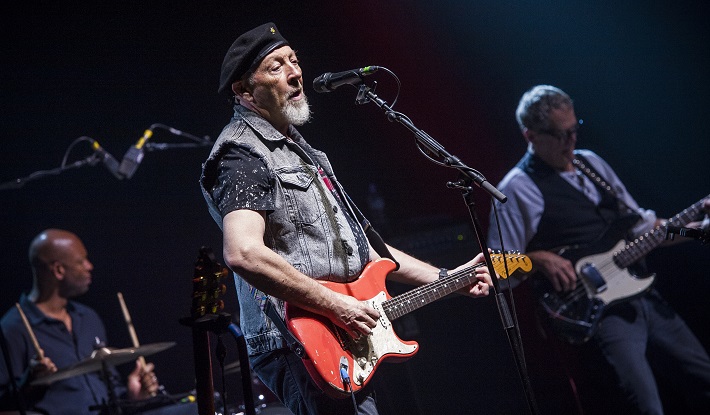 The Richard Thompson Electric Trio (plus the occasional guitar roadie filling out the sound) hit Manchester running and turning in a typically, erm,  electric performance.

Makes a change that instead of opting for his usual trip to The Lowry at Salford Quays, Thompson (or whoever books his tours more likely) opted for the city centre for a change. A proper atmospheric  old style theatre to boot with all the trimmings. One that still follows that strange theatrical ritual of the lowering and raising of the safety curtain. You can also stick a pound into a slot on the back of the seats and borrow some binoculars – and yes I remember getting my money stuck, not at th RT gig but when I was taken as a youngster to watch Des O’Connor in panto one Christmas. I think it was Cinderella and Des was Buttons – Careless Hands was his big hit and you could buy it in the foyer afterwards…..not much has changed. However, one sign of the times is that you can now download an app for the ‘you sit we serve’ service that means you can wave at a steward and have your drinks brought to your seat.  I’m sure for a much greater fee Richard would even come and play in your house and save you having to go out but we digress. 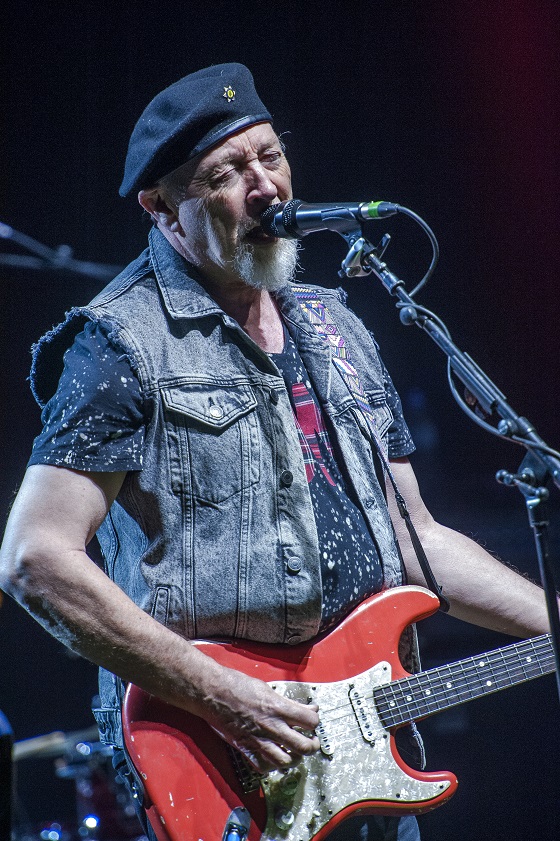 A brief opening set from of gentle acoustic guitar picking from regular touring partner,  Kentucky’s  Joan Shelley and her guitar whizz partner Nathan Salisbury served as a palette cleansing aperitif before what the billing from The Times had already suggested would be “a show of pure magic from start to finish”, making it sound like a musical theatre extravaganza. But you can see where they were coming from. Fans who’d been around for the fifty years since the early Fairport days (“very important consumers on my database – don’t die yet!”)

A lengthy workout on Can’t Win before They Tore The Hippodrome Down (“the high street smells of vandals pissing” – he must have been walking through town earlier) from what he called the underwhelming received (although massively underrated) Acoustic Rarities series. To prove the point, the solo acoustic version of  his signature piece 1952 Vincent Black Lightning was absolutely incendiary. Many have covered the song and to be fair done a decent job, but it’s only when you see and hear Thompson himself doing it that you realise he  blows anything else out of the water.

Further down the line, Guitar Heroes saw him taking off the heroes of his youth and of course he has a new album out to add to the difficulty of picking a set from an immaculate back catalogue. Again, to be fair, thenew stuff from 13 Rivers rocked as hard as anything he’s done – the opening salvo of Bones Of Giliad and Her Love Was Meant For Me proof that although his guitar  style is unique, he can rock and  riff with the best. And then there was the chance to acknowledge the passing of fifty years with a nod to his formative teenage years. Not so much firing up a tribute to his inspirations, but acknowledging his own heritage with Meet On The Ledge making an appearance early  in the set which might have seemed unusual as it’s the climax of any Fairport show and then hauling up Tale In Hard Time from under the radar.

Regardless – The Times got it spot on really. Perm any hour and a half’s worth of songs from the Richard Thompson back catalogue and you can bet that Thompson, Michael Jerome and Taras Prodaniuk will deliver.