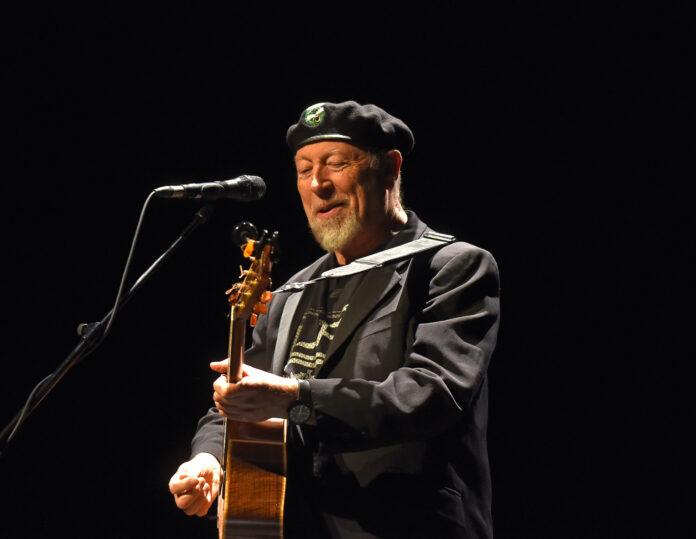 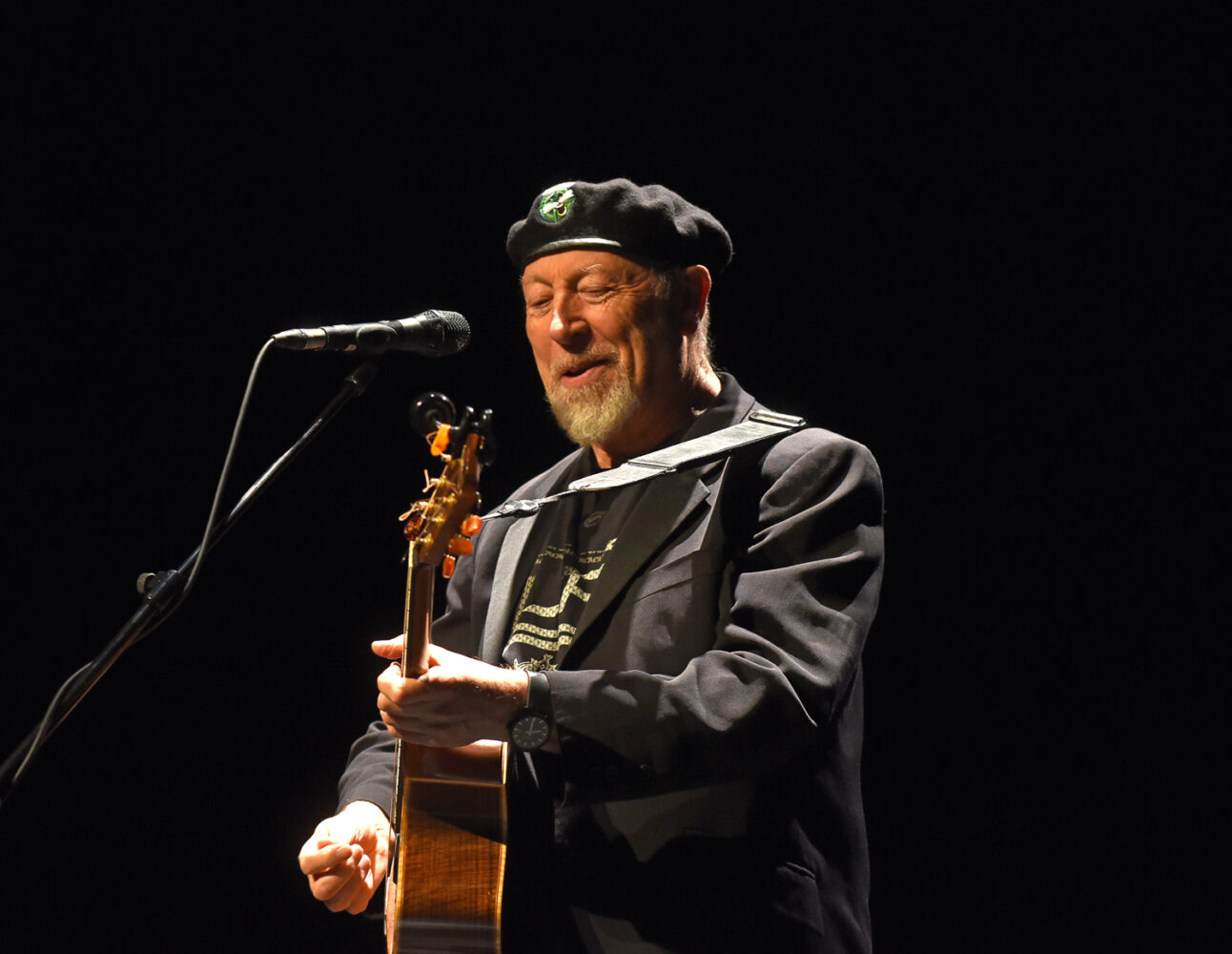 Singer, songwriter and guitarist Richard Thompson brings his current acoustic tour to the Edwardian opulence of Manchester Opera House for a Halloween treat.

Special guest for the tour is Katherine Priddy, a rising star of the UK folk scene. Standing alone on stage with acoustic guitar, her voice immediately grabs our attention. There’s something richly pastoral, almost ethereal about her singing. At times her phrasing and tone are reminiscent of Nick Drake and there’s a timeless feel to the music. It quickly becomes apparent that she’s also a talented guitarist. With songs referencing literature and Greek mythology, she’s clearly well-read but also finds space to cover everyday experiences with ex-boyfriends. It’s an impressive performance leaving me keen to hear more and investigate Katherine’s recently released debut album. 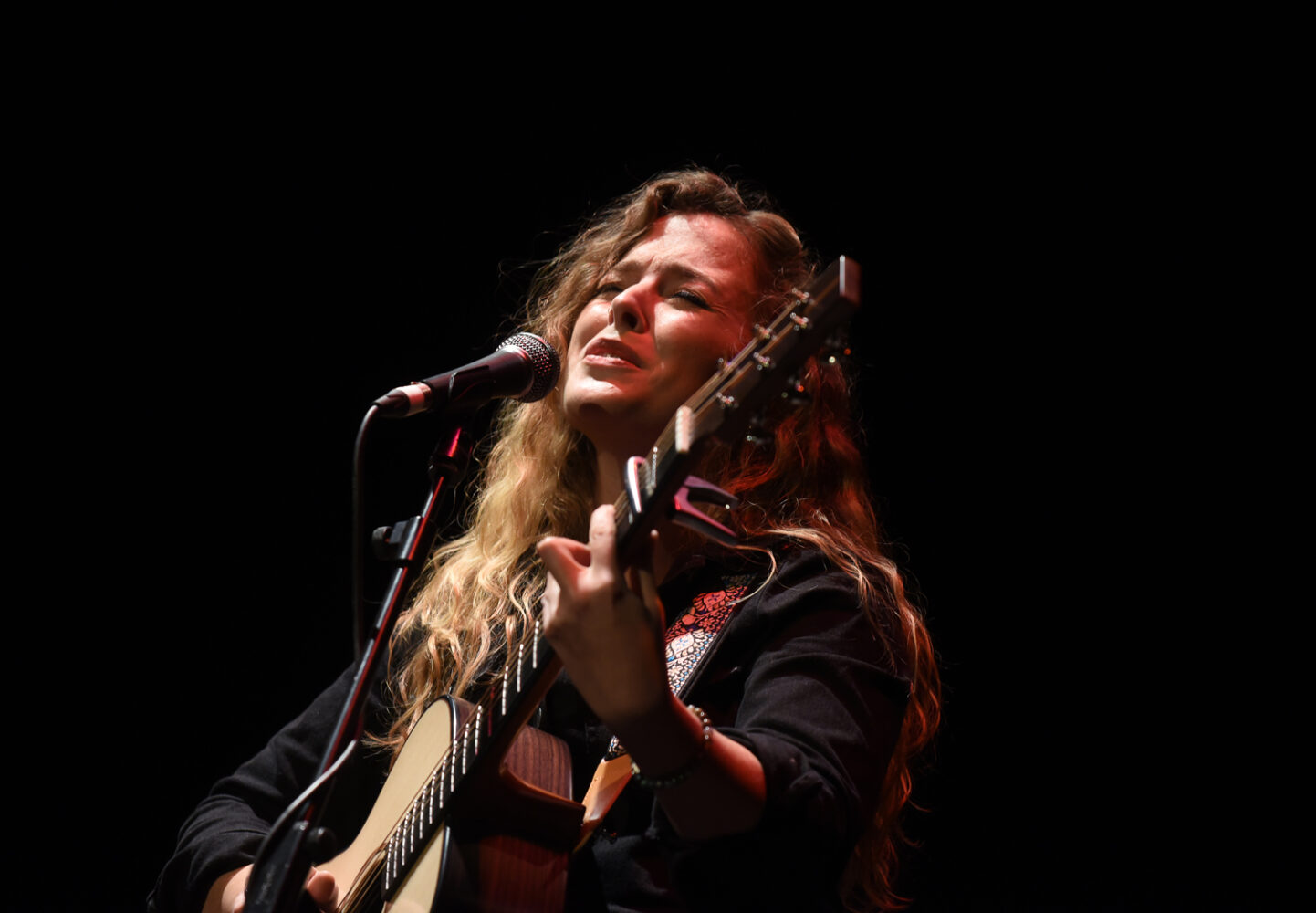 Richard Thompson walks on stage with guitar in hand. Pausing only briefly to smile (or perhaps smirk) at the audience he launches into Stony Ground, a brutal tale of an old man’s lust for a neighbour. On record it’s a vehicle for a raw extended electric guitar workout; played acoustically it’s equally stunning and an immediate testament to his fretboard virtuosity.

If I Could Live My Life Again comes next. It’s a recent song; one of several aired tonight and recorded during lockdown that he’s released as digital EPs. Musically it’s quite a simple affair with lyrics about caged frustration and looking back. It works well acoustically and of the new material that he plays this, and The Fortress (that he plays later) with its typical Richard Thompson chugging rhythm, are probably most enjoyable on first listen. 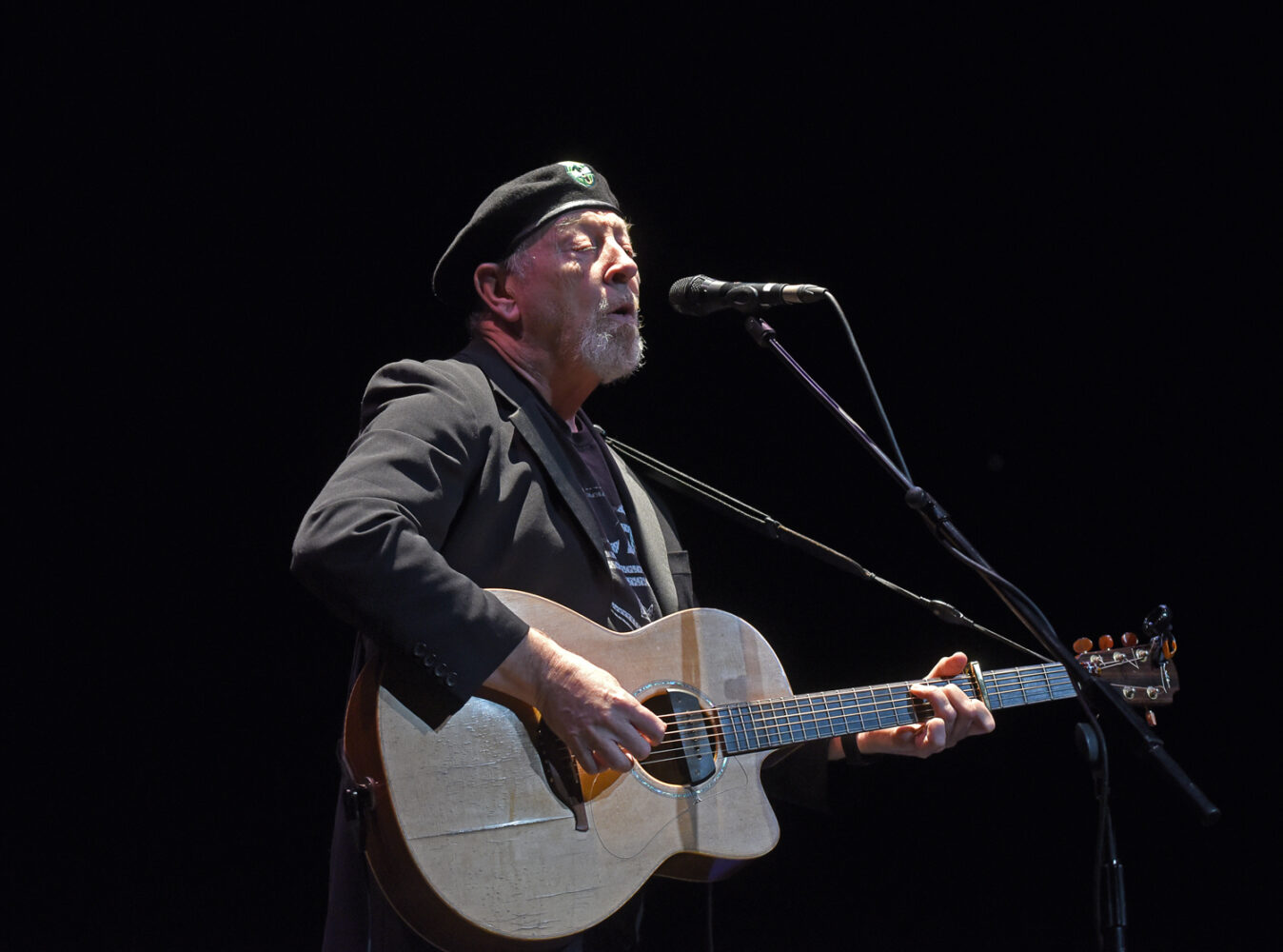 He slows things down with Salford Sunday; not part of his regular setlist and no doubt performed with tonight’s venue in mind. Lyrically and tonally, it’s a downbeat song with references to the weeping sky and rain beating down. On a night when it rains before, during and after the gig, this seems quite apt to me. We get some wry, sardonic banter about Mancunian weather and the relationship between and Salford and Manchester. Unfortunately, not everyone seems to appreciate his irony and humour.

Tonight’s performance isn’t quite a typical Richard Thompson gig; he’s got a book to promote. Beeswing isn’t so much a biography as a collection of reminiscences from his early career. Initially, I’m a little disconcerted watching him sporadically reach for his sheaf of papers to read extracts but they’re generally well chosen and provide enlightening contexts for some of his songs. It emerges that Turning Of The Tide is a response to his experience with a lady of the night in Hamburg during an early Fairport Convention tour. In Walking The Long Miles Home meanwhile, he reflects on his musings during ten-mile walks home from The Marquee Club as a sixteen-year-old after watching The Who and others at the venue. 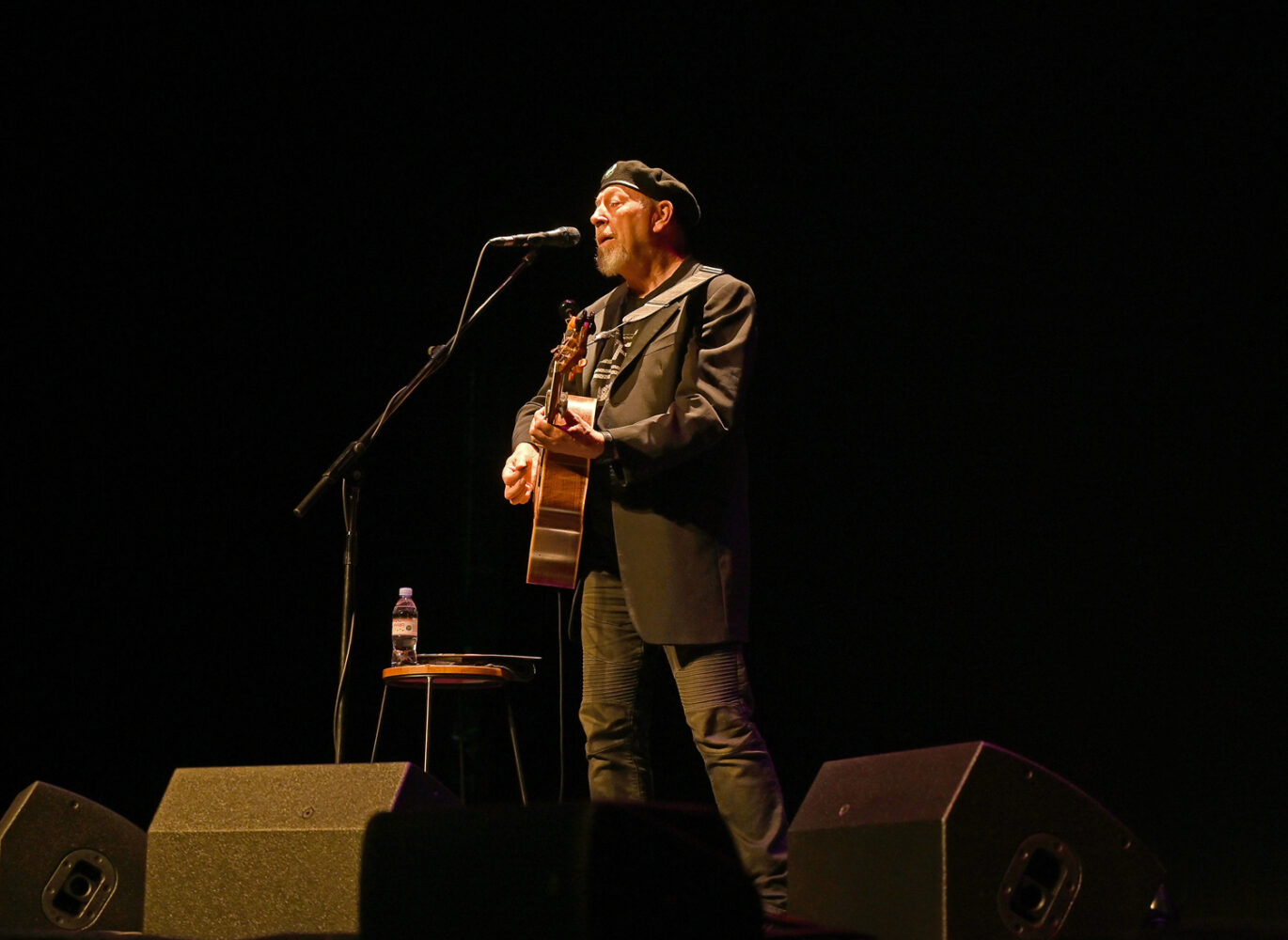 Mid-set he delivers a couple of real highlights. We’re invited to sing the chorus to Down Where The Drunkards Roll and duly oblige; sounding far more tender and sweet than more raucous renditions I’ve previously heard. Richard seems genuinely impressed. As he plays the introductory notes to 1952 Vincent Black Lightning, they’re greeted with spontaneous applause. It’s a great song showcasing both melody and his gifts as a storyteller. Tonight he delivers an extended version with some spellbinding guitar. It’s a real affirmation of his reputation as one of the greats and no surprise that it gets the best audience reaction of the night.

Partner and recent collaborator Zara Phillips joins Richard on stage to sing harmony and backing vocals for the latter part of the show. They begin with the Wall Of Death. It’s a Richard and Linda Thompson song, originally featuring dual vocals, but I’ve heard it performed so many times with just Richard’s voice that their version feels somehow diluted. Elsewhere, Zara’s contributions are far more impressive and she gives Keep Your Distance a real Americana/country feel with echoes of Emmylou Harris in her delivery.

Almost inevitably, they close with a rousing rendition of I Want To See The Bright Lights Tonight; with Zara’s voice giving the song a real sense of Richard and Linda’s original.  They’re ably supported by the dulcet tones of the audience on the chorus, eventually departing the stage amid reciprocal applause. 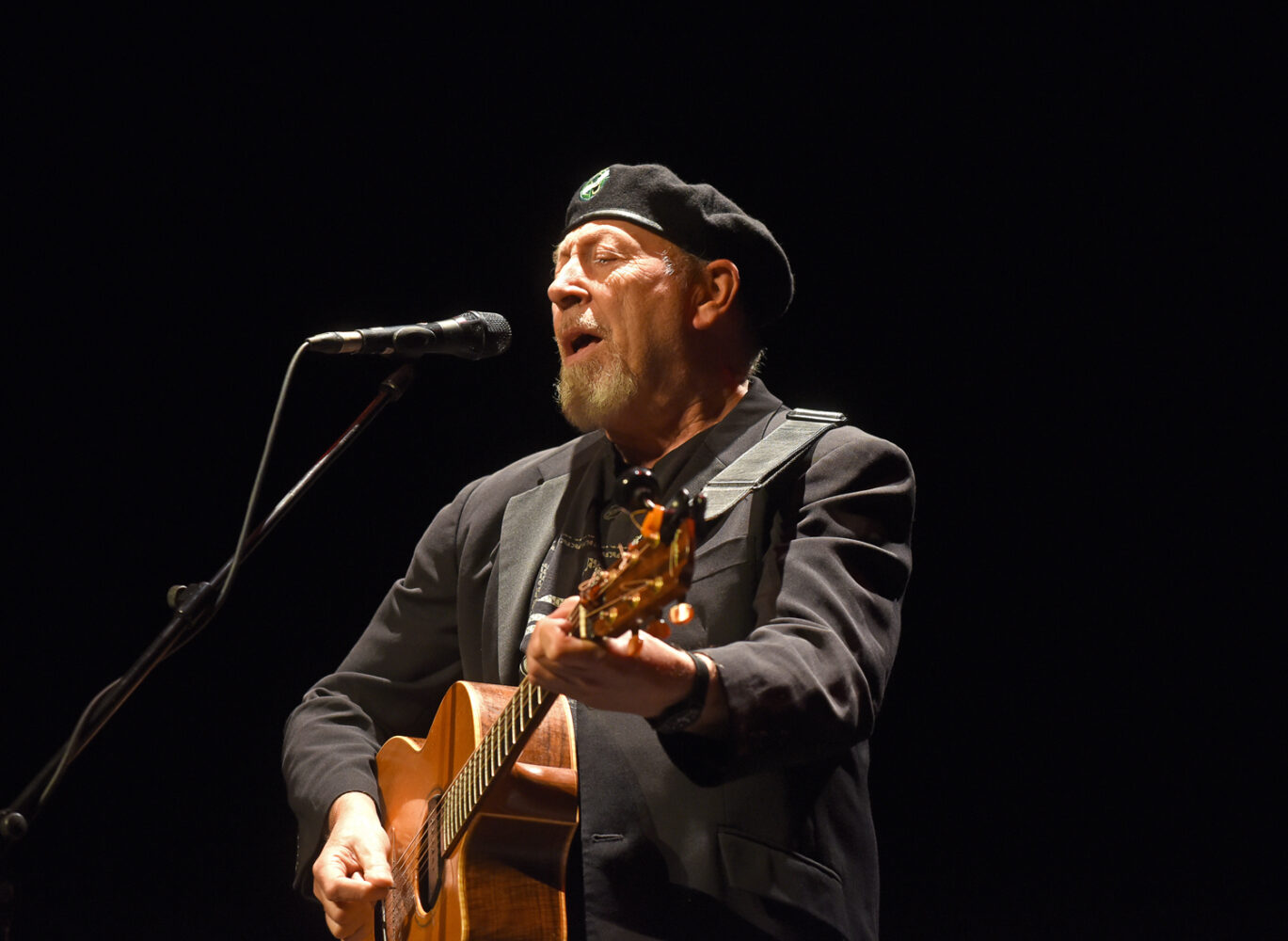 Returning alone, Richard plays the equally inevitable Fairport standard, Meet On The Ledge. The crowd are quick to contribute but once again they’re very restrained. Maybe it’s an age thing; there’s lots of white and greying hair around me tonight. Zara comes back on stage and they continue with the very folky Tinker’s Rhapsody before finally closing with The Storm Won’t Come; slow-building and guitar-driven. It’s an excellent way to finish.

Considering Richard Thompson’s vast canon of work, people inevitably disagree over what he plays at a gig. Personally, I’d have preferred more from his recent 13 Rivers album but maybe it’s a little too electric for an acoustic show. Putting aside my personal tastes, we’ve had a great evening. He’s delighted us with songs from across the years and proved himself yet again to be a stellar guitarist.

With the chorus of The Storm Won’t Come ringing in my ears I wander off into the Manchester mizzle; hoping in vain that it doesn’t. As it turns out, even Richard Thompson can’t hold back the weather. The storm does come but I’ve enjoyed a memorable night; a Halloween that’s delivered a bounty of treats.