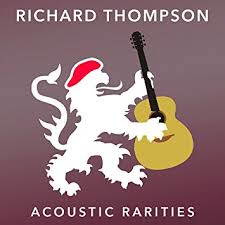 A perfect example of the old maxim of waiting hopefully for a bus and then two come along. With the recent  Acoustic Classics II making good the promise to follow the wonderful Acoustic Classics of 2014, hot on the heels comes Acoustic Rarities. It does what it says on the tin.

The Thompson back catalogue is a veritable embarrassment of riches but offers the chance for Richard Thompson, obviously in a rich vein of form and on a roll, to dig into the archives  to present another fourteen tracks in the acoustic format that worked so well on Acoustics Classics and the follow up released earlier this year (read our thoughts here).

They are proper rarities too, for while the predecessors may have focussed on something of a relatively safe selection, Rarities goes into the sort of depth that will go some way to satisfying the real fans who know their Thompson stuff inside out. The Acoustic series starts to get really interesting with an eclectic selection that’s as much fun to research into the origins of as to listen to.

Anyway. What makes the set? Is it the handful of unreleased works, the takes on some of his early solo material or the lucky dip into the Fairport bag of goodies? Maybe worth taking a look at the little clusters that form the rarities.

It’s a pair from the half dozen unreleased gems introduce the set: What If springs forth complete with the chance to grimace at “Fat man in a thong” line while  They Tore The Hippodrome Down is a morose musical hall reflection of its title. The latter one of those songs, like you find scattered through the Dylan and Springsteen catalogue, that beggars belief why they remain so long in the vaults. As though their owners don’t trust, or show a rare lapse in their own judgements.

Push And Shove is the Rumour And Sigh period piece that failed to make the grade as it skiffles along in an inconspicuous way while the album closer proves well worth its sequencing.  She Played Right Into My Hands, the “pawn in her  game” or “she was a pawn in mine” see saw of a relationship explored with a timeless Thompson accompaniment.

Having offered enough to warrant the admission price alone, the solo career gets mined with 1972’s debut period contributing Poor Ditching Boy as perhaps the pick with a more assured and ringing performance, plus the inevitable Fairport offerings with a couple from Full House. And then there are the songs covered elsewhere, the pair of Rainbow Over The Hill and Seven Brothers which have been taken up by the father/son  duo of Ashley Hutchings  whose Albion Band took the former during their Rise Up Like The Sun sessions, and Blair Dunlop (check his version of a classic bleak and cheerless folk number on Blight & Blossom).

Finally, I’ll Take All My Sorrows To The Sea is an fascinating acoustic version of a song originally contributed to a chamber orchestra song suite with the Idyllwild Arts Academy Orchestra. Fingers crossed in the hope that more of this may emerge in a similar format and with the prospect, nay anticipation/expectation of more acoustic meanderings to come now the box has been opened, Thompson fans will be getting the feeling of being spoiled.

You can watch Richard Thompson playing acoustic at Cambridge Folk Festival in 2011 here: