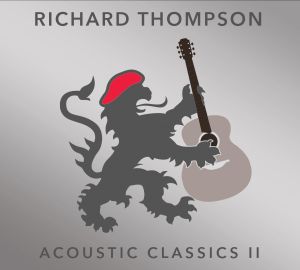 The follow up to – you guessed it – Acoustic Classics, finds our hero, the archetypal English singer/songwriter/guitarist, delving further into his vast repertoire to reinterpret in acoustic renderings.

Many, myself included, would consider the best way to appreciate Richard Thompson would be simply to see him armed simply with his acoustic guitar and his considerable songbook. On Acoustic Classics II, the multiple award winning and OBE recognised English musical icon raids  that catalogue again, featuring  songs previously recorded with other singers and some previously only available in band format.

And what shines through once more is the quality. Oh the quality! Not just the celebrated and exceptional guitar technique but the sheer excellence of the songs. Another set of fourteen songs is a veritable feast and thankfully a case of reinvent rather than regurgitate in a tired old unplugged box ticking fashion as he injects new breaths of life into the rightfully labelled classics.

From the sneering delivery of She Twists The Knife Again, it’s a pretty fair selection gathered from his solo work and delving into the musical partnership with wife Linda with A Heart Needs A Home and Jet Plane In A Rocking Chair while the Fairport Conventioneers can feel placated with the obvious choice of the anthemic Meet On The Ledge and Genesis Hall from Unhalfbricking. The possibly less obvious Crazy Man Michael from the seminal Liege & Leaf ticks the box  from that groundbreaking record.  Elsewhere, Pharaoh plods a moody and sombre path with  the throbbing groove of Gethsemene marks  an early highlight.

A couple of less obvious choices, each a delight, include Devonside from 1983’s Hand Of Kindness – one he often omits with the admittance it could be accused of being  too depressing, although folk fans are an understanding bunch. Guns Are The Tongues from Sweet Warrior is the sort of selection that might have the result of the back catalogue getting a boost.

Look out for Acoustic Rarities later in the year featuring some more obscure renditions from the RT catalogue – he might have started a trend and have fans pining  and predicting for the inevitable Volume 3, but no-one’s complaining. Four simple words; Richard Thompson acoustic classics – you can’t fail.

You can listen to Gethsemene from the album here:

You can find Richard Thompson online at https://www.richardthompson-music.com/