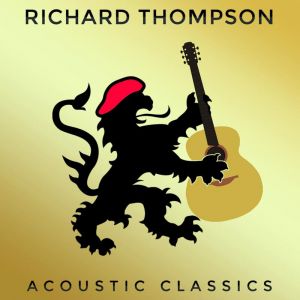 For many years I have attended Fairport’s Cropredy Convention in Oxfordshire. On the numerous times that I have been to this superb festival, I have witnessed Richard Thompson performing in various line ups. He has performed many a time with his old group, Fairport Convention; on his own with just his acoustic guitar, and with his own band. Upon receiving this latest compilation to review, I was immediately taken back to 2012 when Thompson performed solo. I witnessed one of England’s finest songwriters in his barest musical form. Many of the songs that he performed on that lovely summers evening are included on this album, which has been put together to document Thompson’s solo ventures.

The track list on the album is collated from many parts of Thompson’s vast back catalogue. Nods to his records with his then partner, Linda, are rife. The album opens with the classic I Want To See The Bright Lights Tonight from the 1974 album of the same name. Also included from this album is the mournful Down Where The Drunkards Roll.

Richard and Linda hit a groove in the mid 1970’s and produced some utterly stunning music together. The aforementioned tracks are evidence of this, along with Dimming Of The Day; the album closer, taken from 1975’s Pour Down Like Silver. A break from music ensued after this album in the 1970s and things never fully clicked again musically until their seminal 1982 release Shoot Out The Lights.

Whilst this compilation sees three inclusions from this album, this particular era of the pairing saw the pair separate and still have to go on tour together which has been noted as a time of particular hardship, as you can imagine. Although it was a time fraught with emotion, the songs almost seem cathartic. Walking On A Wire is particularly heart breaking and Shoot Out The Lights has an air of the literal about it. Thompson’s interpretations of these songs here is sublime and going back to the said live experience I had, I remember Walking On A Wire being observed with complete reverence. I don’t think I’d ever seen so many people in a field almost silent for one person and his guitar.

After the pair split, Thompson achieved arguably more success on many of his solo albums. Valerie, taken from 1986’s Daring Adventures sees Thompson’s complex playing style taking centre stage. Thompson’s playing ability is perhaps showcased best on his 1991 tale about a 1952 Vincent Black Lightening motorbike, from Rumour & Sigh. It’s hard to think that it is only one man playing the guitar. The track is a thing of majesty for any guitar player. I do not play any instruments but if I could, this is what I would aspire to. It is magnificent.

These stories, rather than more personal and introspective songs showed a different side to Thompson the songwriter. Inclusions of Beeswing, I Misunderstood and a particularly passionate version of Persuasion, re-recorded from 1991 soundtrack Sweet Talker help make up a stellar list of songs. All of these songs may be a little less well known but whereas Thompson is a guitar virtuoso, these songs show that he can sing quite well too! He may not be the greatest singer, but his delivery helps the songs reach their emotive, raw levels.

The whole album is rife with superb highlights from a glittering career. Yes there have been lows in his storied career, but make no mistake, there have been massive highs. Richard Thompson deserves his place alongside luminaries such as Dylan, Cohen, Cash, Springsteen and Bowie as one of the greatest songwriters ever. This is a fantastic and inspired collection to whet your palate if you’ve never sampled Richard Thompson’s music before.