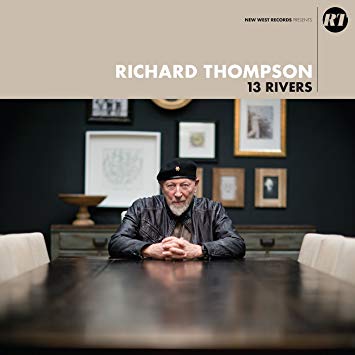 13 songs, each one like a river – read on to find out why –  on the latest platter from folk legend and possible threat to Winston Churchill as the greatest living Englishman, Richard Thompson OBE.

Few things are certain in life. Birth, death, your favourite football team will let you down at some point, etc, etc.  Oh, and the fact that when Mr Reliable, Richard Thompson releases an album, you’re guaranteed a piece of class.

13 Rivers comes  self-produced and  recorded in a mere ten days  with the usual back up team of Michael Jerome on drums, bassist Taras Prodaniuk and Bobby Eicholm on extra guitar. Add the  100% analogue equipment and you have a good old school album.  As such, it’s a raw collection, each song Thompson explains, “like a river. Some flow faster than others.  Some follow a slow and winding current.” He also talks about the songs being “a surprise – they came to me in a dark time,” and there’s certainly an ominous rumble about the opening volley that’s set off by The Storm Won’t Come,  the raw guitar tone he coaxes out in The Rattle Within and the density that surrounds Her Love Was Meant For Me that hints at a swampy and bluesy direction while namechecking the apocalypse and armageddon. It also openly displays the intention of sequencing “the weird stuff” (his words) at the beginning.

What lies beneath though is the unmistakable and dependable Thompson craft. Those guitar lines that suddenly take a shift into jerky angular new wave clusters and then jangling and clean Fender tones.  O Cinderella, all Black Jack and Willy McGrue, could be his contribution to the latest incarnation of Fairport – and is that a little mandolin sneaking into the background to add to the carnival laced innuendo before another tremendous solo gets peeled off.

The solo that sees out Do All These Tears Belong To You might sound little discordant to some ears but hey, this is Richard Thompson. Whether or not, the intention to “grind your soul into submission at the back of the album” works, Pride is a dynamic tour de force rocker with a rapid fire lyric and provides the seal on 13 Rivers to confirm that whenever Thompson slides his foot into the slipper it’s always a bespoke fit.

Listen to The Storm Won’t Come from the album  here: