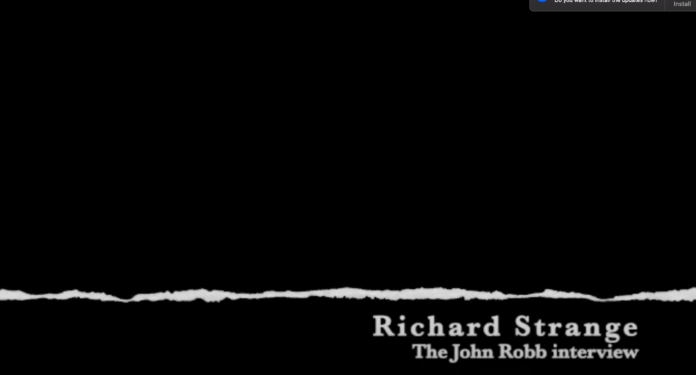 The very definition of cult band Doctors Of Madness arrived in 1975 joining the dots between Bowie, glam and prog without being any of these genres and somehow paved the way for punk by being a profound influence on many of that scene’s key players. In this interview their frontman talks about how he grew up, put the band together, their short career and his fascinating post Doctors career in music, theatre, writing and art and his recent new Doctors and solo material and upcoming UK tour with TV Smith (dates below)

with Band of Holy Joy

Writer, musician, composer, nightclub host, curator, actor and adventurer, Richard Strange was born in London in 1951. Since his proto-punk rock band The Doctors of Madness (“The missing link between David Bowie and The Sex Pistols…” wrote The Guardian in May 2017) was first unleashed on an uncomprehending public in 1975 (the band was supported by the Sex Pistols, The Jam and Joy Division) he has been a Zelig-like figure whose presence has been felt in every corner of London’s cultural life. Now comes his solo show An Accent Waiting To Happen, an evening of songs, films clips, stories, readings and downright scurrilous gossip from his 40 years in the arts and entertainment world. He founded the hugely influential mixed-media Cabaret Futura in 1980, and has subsequently worked as an actor, appearing extensively on stage, in films and on television. Strange has been seen in films as diverse as Batman, Mona Lisa, Robin Hood-Prince of Thieves, Gangs of New York and Harry Potter. He has made numerous TV appearances, and as a stage actor he has worked alongside household names such as Peter Capaldi and Marianne Faithfull.

In 2003 he toured the UK with the award-winning Dance Theatre Company Protein Dance, contributing as an actor, narrator, musician and writer.

Throughout 2004-7 Richard worked with Marianne Faithfull on the Tom Waits/William Burroughs/Robert Wilson collaboration “The Black Rider”,performing in theatres in London, San Francisco, Sydney and Los Angeles.

He was part of Jarvis Cocker’s Meltdown Festival, at the RFH, in an evening of songs from Walt Disney movies, and this year performed with the producer/arranger Hal Wilner in Brooklyn and at The Barbican, alongside such luminaries as David Byrne, Tim Robbins, Steve Buscemi, Shane McGowan and Suzanne Vega.

He has composed music and written a number of songs for the Contemporary Dance Company Protein Dance. In 2010 he re-opened his groundbreaking mixed-media Cabaret Futura after a 30- year hiatus, and curated the 2011 New Territories International Festival Of Live Art in Glasgow.

In 2012 he was also commissioned to write the song for the closing credits of the Hollywood film Dark Hearts. The resulting song was called Blood Brother, and Dark Hearts was screened at The Cannes International Film Festival in 2012.

His collaborative artworks, A Sleek Dry Yell, and Last Tape created with the award-winning artist Haroon Mirza, were bought for the nation by the Contemporary Art Society in 2012, and are currently touring the UK Art gallery circuit.

Increasingly involved in the worlds of education and academia, he teaches Creative Musicianship to BA students at Tileyard in London, and is also a mentor on the National Music Education charity, Music For Youth. Overseas, he was elevated last year to Visiting Fellow by The Hong Kong Design Institute, where he also lectures and co-ordinates collaborative creative projects. He is also a Principal Fellow at the Higher Education Academy, one of only 350 in the country. He lectures regularly on creativity and multi-media events, and was recently honoured to be invited to be a judge on the Gobal Undergraduate Awards scheme.

In 2013 he was Narrator and sang baritone in the UK premiere of Frank Zappa’s 200 Motels, which played to a rapturous full house at The Royal Festival Hall and was praised by critics from every area of the media, and also featured in Hal Willner’s concert Amarcord…Nino Rota, the Barbican tribute to Fellini’s composer, with Marc Almond, Nitin Sawnhey and Kate St John.

“Language Is A Virus From Outer Space”,

Richard’s collaborative project with the composer Gavin Bryars, a cantata based around the life and work of William Burroughs, received its World Premiere at London’s Queen Elizabeth Hall on October 11th 2014, Burroughs’ centenary year. It was greeted with a standing ovation from the sold-out house. Conceived, curated, co-written and directed by Richard, the show featured contributions from Gavin Turk, Sarah Jane Morris, Rupert Thomson, Jeremy Reed, Haroon Mirza, Anni Hogan, and The Doctors of Madness. A feature-length film of the event is current in the editing stage.

Perfect Past – The Complete Doctors of Madness,

released to unanimous critical acclaim (‘The missing link between David Bowie and the Sex Pistols’ -The Guardian) in May 2017 by Cherry Red Records, is a 3 x CD set of the complete recorded works of the band, with bonus tracks, live cuts and demos. The band’s first new studio album for 41 years, Dark Times, was released in September 2019 to universally enthusiastic reviews, and made many lists of the Best Albums of 2019, including The Guardian and The Morning Star.

His political-fantasy concept album The Phenomenal Rise of Richard Strange last year was performed in its entirety on a UK tour last summer, with shows alongside Nick Cave, Patti Smith and The Psychedelic Furs.  He was also commissioned to perform a new collaborative work, Unknown Remembered, as part of the recent Spitalfields Music Festival in London. Richard toured the UK and Europe with An Accent Waiting to Happen in Early 2020, and the Doctors of Madness new album, Dark Times

was released in September 2019 to rave reviews. A sold-out Japanese tour to promote the album followed.That same month he toured the UK with a band of internationally-acclaimed musicians with his show “Richard Strange Performs the Songs of Lou Reed”.

Throughout the lockdown Richard has not been idle.  He has performed several online shows, produced an album for the exciting young band The Glare, recorded an audio book version of his memoir and started his own radio show, his weekly Dark Times Radio, which is syndicated to Portobello Radio, Radio Scarborough and other regional stations.

His memoir, Strange- Punks and Drunks and Flicks and Kicks was published by Andre Deutsch in 2005.