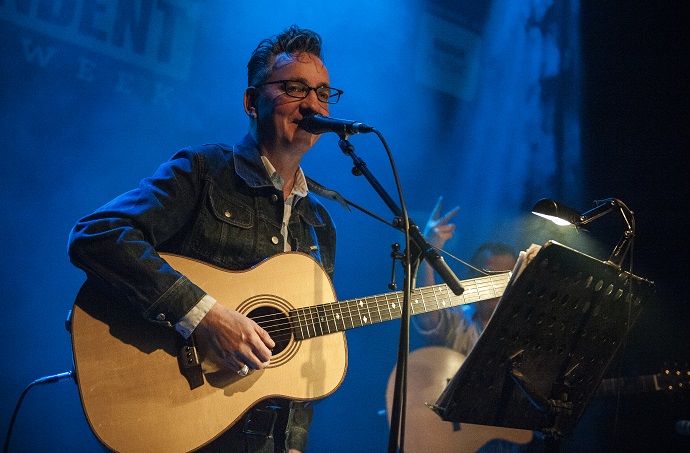 A strong sense of déjà vu is in the crisp chill of the early February air.  Independent Venue Week has come round again. Time to celebrate and pay tribute to those venues who continue to promote live music and the artists and fans who support it.

And Richard Hawley  is back at The Met for the weekend again. We head down on Sunday night. Again. And once again, there’s local latchkey lad Liam Frost doing the warm up. However, there is one surprise in store, revealed after Richard himself has taken the stage, made a  dedication to Paul the welder (not Paul Weller) and informed us that Tonight The Streets Are Ours taken at a gentle acoustic stroll rather than with the usual fairground pulse.

We may have guessed; the clues in the series of gorgeous guitars (and two banjos) lined up at the back and in the knowledge that there’s a strong sense of camaraderie in the  Sheffield music community, Martin Simpson is introduced to add his formidable musical presence alongside Shez Sheridan and frequent appearances from Clive Mellor and his harmonica. A prime example of how, when it comes to trying to do something a bit different (Richard once spoke to us of how doing the same things bores him so must surely bore his audience) you can turn to your neighbour. 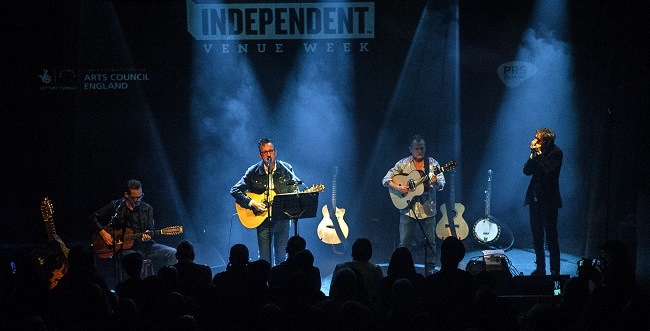 A setlist and songs that were a bit different too: his dad taught him, songs that his mum taught him, a nod to the influence and inspiration of Buddy Holly and of course the usual Hawley banter including a friendly dig with jokes about banjos (“more banjo!” was the prompt).

Highlights? The Sea Calls – “it goes on a bit that one” but we hadn’t noticed, just revelled and wallowed in the waves and combination of ringing strings, the three piece band  in unison and to be frank, could easily have coped with it going on  and on. The 12” remix version. So when you go to a gig, you have your fingers crossed, so we were in luck with two songs on a personal dream setlist – one you hope and almost expect he’ll do with Son Of A Gun returning as an encore  and one you hope for don’t really expect and get goosebumps when you spy it on the setlist – Lady Solitude. In whatever form its played, Standing At The Sky’s Edge always seems to have that dramatic sense of impeding portent, especially with the dense red light. With all four musicians firing away, it’s maybe an avenue he should explore more.

So what do we know now that we didn’t know last year? A few million gallons of water may have passed under the bridge but in Hawley-world, we hear of a  new album being imminent (we may even get to chat to the man to find out more  in due course) and there’s  the Standing At The Sky’s Edge show soon to open at Sheffield’s Crucible Theatre featuring the words and music of you know who.  We also know/hope that the he’ll hold firm on his promise to return for IVW  next year and “for many years to come.” He’ll have his space reserved on the fire escape anytime he wants to have a fag in Bury.