With a new album, Further, due at the end of the month, Richard Hawley headed out on a select few dates for the fans to assess if the new songs were up to the mark or “just fucking shit.” No doubt that a gig in his home county of Yorkshire would prove a no-nonsense testing ground.

Decked out in his traditional double denim and with a remarkable array of guitars being switched in a regular stream from perhaps the hardest working guitar tech in the business, Hawley was bang on form. From having the sell out crowd singing Happy Birthday to his eldest son (complete with a story about his mates – “all fuckwits”) to regular bouts of the customary profanities and plenty of “You know what I mean?” he pretty much held an excitable Yorkshire crowd in the palm of his hand. 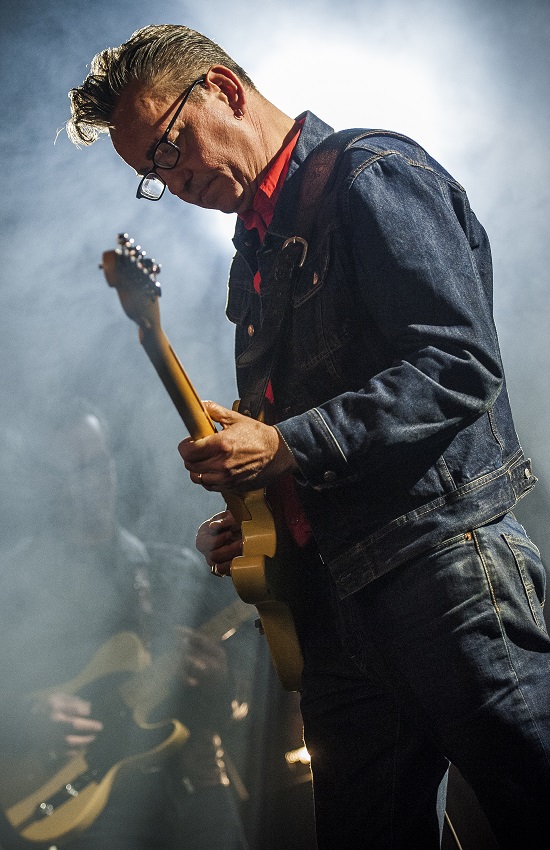 Standing venues with a bar don’t always lend themselves to some of the sweeping and delicate Hawley gestures although announcing a lengthy set with the new mixed with the old, the band came out all guns blazing with Off My Mind and Alone; the former a blast of sharper rock and roll  that’s as un-Hawley like and harder-edged than he’s done in a long long time if ever. Hawley goes punk?  Certainly a riff that Steve Jones would have been proud to present to the Pistols. Not many bar those up close might have caught the off mic aside, “Strap yourselves in.” Maybe he was addressing the audience or possibly the band as they headed headlong into unfamiliar territory.

Unfamiliar too with a four-piece string section in tow. Nerves may have been a jangling for the first time outing for For Your Lover Give Some Time in a live setting with the strings.  “The quietest song we do, so it would be great if you could hear it” was a barely disguised hint to those who’d come out for a drink and a chat and for whom there was the distraction of a band on. Cue plenty of shushing as strings and regular band of brothers inevitably nailed it.

The strings had already earned their keep simply by reproducing that cinematic sweeping opening to Coles Corner that received an audible “ooooh” from the masses and by more than playing their part on Open Up Your Door. The main man busied himself playing a lot of acoustic guitar, maybe rediscovered from his regular acoustic solo(ish) jaunts but wasn’t averse to ripping out some fizzing solos, notably on Standing At The Sky’s Edge and at the playout of the deceptively easy charm of Don’t Stare At The Sun. Aside from the familiar, including the tracks he’s already released as tasters of Further, there was plenty of new material, Hawley making the  incredibly bold move of playing all eleven unreleased new songs from Further. So what stuck in the head on first hearing? Midnight Train set up a chilled little groove while Further and Not Lonely seemed to fit the typical Hawley standard for lush ballads. It might have been a challenge to take in so much new music, but served as a mouthwatering aperitif a month ahead of the album release. An album that would seem to be one which has kept things interesting for Richard Hawley, not that he’s ever been boring.  You know what I mean?