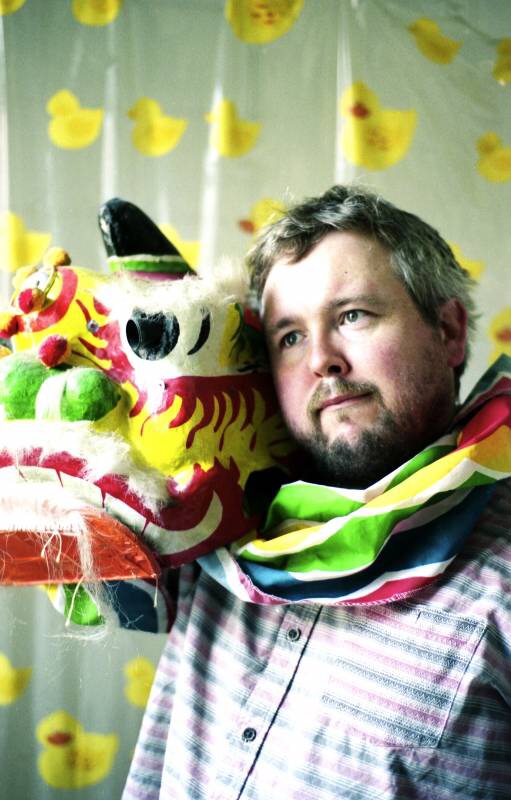 With a set so stunning that it reduces a packed room to silence Richard Dawson is like nothing else out there. One man and his occasional guitar, a disrupted, distorted amp, and an intense range of impassioned vocals he taps deep into the heart of British folk music and virtually reinvents the form bringing a long lost archive blinking into the now and tapping into our troubled English hearts with arcane melodies that flow within our soles.

Utterly compelling, this is a music that moves you in so many different ways it’s hard to keep track of them all. One minute you could be engrossed deep in his neo mystical story telling songs like on Joe the Quilt-maker – a long and hypnotic piece with impassioned vocals deliberately pitched just beyond his range that slither around a stunning melody with a blood vessel busting intensity. This song is the high point of set that sees Dawson tap into the dark roots of the true British folk and it’s like a portal into centuries past, the lone troubadour wandering from town to town telling a naked truth.

He takes huge and daring liberties with the music – this is no retro shuffle, his guitar playing is so off the scale genius natural and so fluid that it dares to take zigzag wanders up the neck that defy all musical logic and tuning and yet still sound perfect. It’s like the prime time Beefheart bastardising the blues but in this case bastardising our own lost culture – the ancient folk tradition of the UK, a folk tradition stained with drama and with the emotion cackling like crows on a stormy sky.

One minute he could be plucking his guitar and singing his heartfelt laments, the next telling long and complex and hilarious stories about buying a pet cat before switching to stamping his feet on the floor with his eyes shut pouring his heart out to ancient and fertile poetry with a strong north east accent.

Dawson is a link to a long lost heritage, a folk you archive of melodic genius and whirling delivary letting all his ya yas hang out with an addictive emotional range that marks him out as one of the key musicians in the UK right now. After the set he looks drained with the sheer physical and mental cost of delivering this astounding brilliance but he is nowhere near as drained as the audience who glow with the post coital rush of a crowd that has seen and felt something truly, truly special.