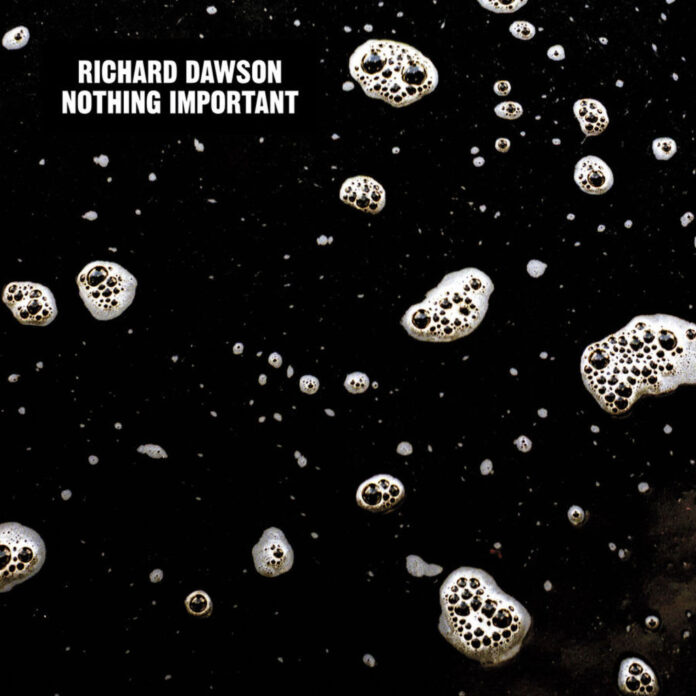 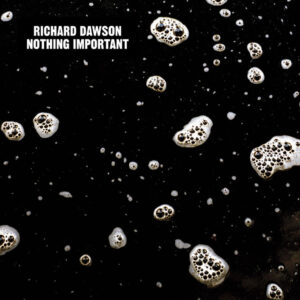 With just four tracks, Richard Dawson’s Nothing Important is nevertheless a heady brew. Louder Than War’s Paul Margree drinks a long draft down.

If the best works of art defy categorisation, and Tyneside avant yelper Richard Dawson’s new album Nothing Important is certainly up there with the best of them.

Folk, jazz, metal, free improvisation and abrasive noise, all vying for ear-room in his crowded, battered compositions. One minute he’s lurching angrily like Metal Mickey out on the piss in the Bigg Market, the next crooning delicately like some no-wave Basil Bunting coming home from a few jars and crooning lullabies to his newborn babe asleep in its cradle.

There’s no better place to explore the untrammelled wildness of Dawson’s universe than the four crazed odysseys that make up this record. Although two of the tracks are instrumental, with the other couple comprised just of Dawson’s hoarse vocals and crudely amplified nylon string guitar, the whole album is full to bursting point with all sorts of details and delights.

Eschewing the short sharp acapella-and-instrumental fragments of 2013’s wonderful The Glass Trunk, Dawson’s new album takes us right down the rabbit hole into his own personal universe with little opportunity to come up for air.

These are dense, fractured narratives, both musically and lyrically, their melodic left turns and lyrical jump cuts having the same fractured quality of some demented cubist painting, a North Eastern Guernica depicting not the horrors of war but the curious dislocation of living in the material world and the pull of memory, both personal and communal.

The album’s title track is a case in point. Sounding like some music hall smoothie Dawson croons: “I am born by caesarean section/9.30 am, in Princess Mary’s Maternity Hospital/On the 25th of May, 40 years ago today” and then leads us on what initially seems to be an autobiographical journey, taking football in the garden (“He’s Maradonna, I’m Peter Beardsley”), the ghosts of family members sighted on holiday, traumas on Astroturf, Toby jugs and the like.

Yet the song’s last verse undercuts what could be an exercise in nostalgia. “He survived for seven days / Before he slipped away,” sings Dawson “He was the most beautiful thing / That I have ever seen”. The vision of the potential future for this child – apparently inspired by the experience of Dawson’s mother – gives the song an almost unbearable emotional weight. It’s bloody marvelous

The merging of memory and imagination in the two vocal cuts, combined with the intricate clang of Dawson’s guitar, means that each listen can render up only small part of the bigger picture. As soon as a song finishes, you want race back to the beginning to hear it again. Each subsequent listen yields up new details, as if you’re hearing something almost entirely new and different each time.

The official video to The Vile Stuff, directed by Harry Wheeler, adds another level of craziness. Dawson’s lyrics describe a calamitous school trip to the Gothic splendour of Featherstone Castle in Northumberland, derailed by a “wee scallywag” bringing “a coca cola bottle filled with a spirit” along, a causing all manner of depraved behaviour.

The video, meanwhile, takes a parallel path, following Dawson and gang out on a debauched night in Newcastle. It has a nightmarish, hallucinatory quality like some kind of Irving Welsh monologue, suitably capturing the gradual descent from fun-filled laughs into tawdry, slurred exhaustion of the typical all-nighter and perfectly accompanying the song’s onward stride.

Dawson’s guitar playing is central to Nothing Important’s continual estrangement. His style has been likened to the dissonant splinters of free improvisation guru Derek Bailey, and while there’s something in the comparison, Dawson’s clotted, distorted crock pot shards seem, to me, more reminiscent of the blistered harp clusters of old sparring partner Rhodri Davies’ Wound Response, particularly in the first few bars of opening track Judas Iscariot.

And before we get too carried away let’s remember that Dawson, for all of this avant-garde leanings, does actually play chords and melodies, however disguised. Those atonal bursts at the start of Judas Iscariot soon give way, first to a lumbering blues stomp then to a gossamer-thin web of exploratory picking that picks a crooked path between melody and feedback before those rusting chords come crashing back in. It’s like a classically trained black-metal guitarist let loose on the Penguin Book of English Folk Songs, and it is never less than thrilling.

All words by Paul Margree.  More work by Paul can be found in his authors archive. He writes about experimental music at We Need No Swords. Or you can follow him on Twitter.