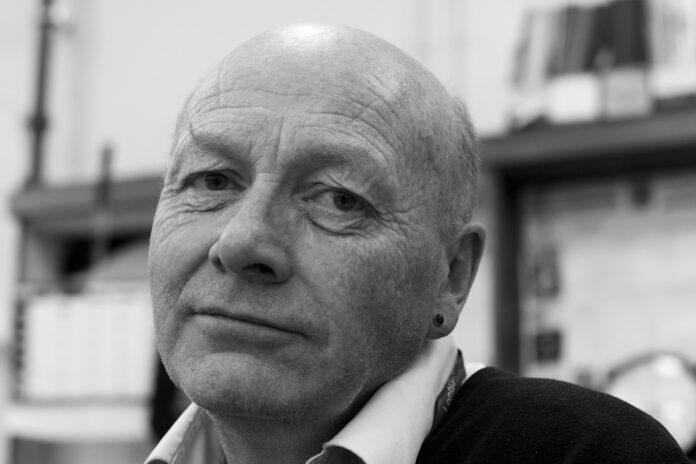 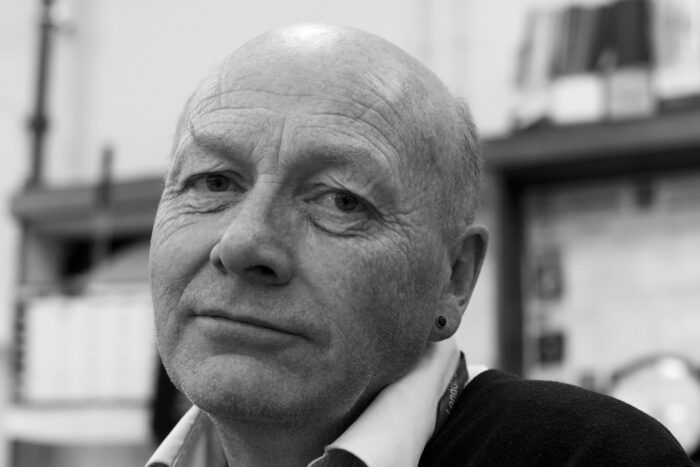 Bryony Hegarty: Richard you’re a key player in Stoke Newington Literary Festival, now in its sixth year. One of the festival’s annual events is your Juke Box Fury panel. Tell us about it.

It is a gag but one with serious intent. Loosely based on the TV show Juke Box Jury, I chair and four panelists take turns to nominate the track that inspired them to become music journalists. Each tune is played and after some discussion the panel votes it a hit or a miss.

As you say it is a light-hearted premise but the event always leads to some pithy debate about music journalism. There’s a huge appetite and a passion for music writing and publishing, websites such as Louder Than War and events such as Juke Box Fury embrace this. What is it that makes music writing so popular?

Iggy Pop said that good music writing makes you want to listen to the music; that sums it up. Juke Box Fury began as a one-off event, in 2011. Charles Shaar Murray, Lucy O’Brien, Paul Morley and Simon Reynolds played The Who, The B 52’s, Sex Pistols, Buzzcocks. The discussion was about the ideas, the energy and the colour in the music that went beyond technical proficiency and it was clear that the event had potential to carry on.

You’re chairing the fifth panel this year; every event brings a new perspective and its own surprises, what particular moments spring to mind from the past four?’

One track was a unanimous ‘miss’ so consigned to the ‘Dustbin of History’.

What was it? And why was it such an interesting miss?

David Quantick chose a Bob Seger track, as a teenager he’d read a glowing review in the NME, bought it and hated it. He was so incensed by the review that he wrote a letter to express his outrage, Neil Spencer the editor of the day wrote back inviting him to do better, thus began his career.

The Juke Box Fury journalists do a Q and A session with the audience after the voting. Questions sometimes ‘jump out of the box’. Do you expect the unexpected?

I was at a Kim Gordon event for her biography ‘Girl in a Band’ at Cecil Sharp House, in the Q and A after some great discussion about Sonic Youth and the Chuck D “fear of a female planet” reference, Kim found herself being asked for parenting tips and about her astrological tendencies. That’s when you need some input to bring the focus back.

You have a perfectly balanced panel this year in terms of gender, it is nice to see that.

Yes, unfortunately there are far fewer women music journalists who have published books and are doing the festival circuit.

Juke Box Fury has become the warm up event for the Ska Panel (Newton Dunbar, Viv Albertine, Danny Baker) Wilko Johnson with Zoe Howe and Ray Davies with Julian Temple. How does the programming work? Is there some sort of symmetry to this?

We’re programmed as light entertainment in between the heavyweights – we’re the commercial break!

In your experience what is the difference between working with musicians and authors?

None really, both are performers. Today to sell books you have to go on the road and do the festival circuit just as musicians have to play live to make money from their music. Increasingly publishers look to the festival to promote authors. Of course a lot of writing, like music, has gone ‘into the cloud’.

Where do you see good music journalism on the net?

Louder Than War of course! The Quietus that is a great forum for extended critical writing. Fanzines are a really interesting niche area.

Are books about music easier to market? Do you think they’re any easier to sell than other genres?

Not necessarily, fans will buy a book about a musician or by a writer they already know but you’re very unlikely to buy a book about someone you’ve never even heard of, which you might do with a novel. Music biographies may have peaked for the time being. Dizzy is still a bit young to publish his!

Skepta, Novelist, Wretch 32 are starting to getting wider media recognition but Grime has for some time been a street music heavily focused on words and word play to beats. Is Grime the new Punk?

The spirit of Punk wasn’t about trying to sound like a Punk band, it was about opening new doors, a gateway to discovery and change. In that way, Hip Hop and Grime are a new era. The words and the wordplay are central and they’re just set to a different beat for a different generation. Kate Tempest is huge she is a great poet and she spits, she’s one of the best spitters, but where the punk bands were performing in a shower of the crowd’s spit, she spits out at the audience!

Moving from music industry mogul to librarianship is an interesting journey, how did libraries come into your life.

Libraries have always been in my life Bryony. My primary school in Leeds became the local library on a Monday night with pull out bookshelves in the hall – and I was a member. I had a job in the library when I was at secondary school – I would stamp the accession numbers on the spines of books with a special machine. When I go on holiday, one of the first things I do is to check out the local library. Hackney Libraries are very supportive of the festival – another way in which the event links back to community – they give us office space and the library home service give their space up during the festival and it becomes the artists’ Green Room.

So you’ve been given the title ‘the world’s coolest librarian’ through the festival, Philip Larkin was a cool librarian can you name some others?

Chairman Mao – he was a cool librarian – and there’s a woman in America who IS the world’s coolest librarian called Nancy Pearl – there’s even an action figure of her that you can buy.

As a librarian you are a custodian of words. There’s a lot of misuse of language in the media. One that irks me is ‘Curator. ‘What do you think?

It is a hugely misused word. It should have an academic context and imply knowledge, expertise in a given field. My daughter is assistant curator of a collection at the Science Museum; some hipster with a beard in Shoreditch is NOT curating a coffee bar, he’s selling coffee. Do you curate your oranges in a supermarket in the green grocer display? No! It’s really sloppy use.

You were one of the founders of N16 Magazine and a columnist; you once wrote an article titled Pointless, the entirety of which was one sentence – what was your point?

That was the point! The article was deliberately uneditable – a friendly protest. When my son read it he phoned me up to tell me there were no full stops in the article and I said ‘Yes exactly!’

SNLF  is possibly the only literary festival to get reviewed in the NME. How did that come about?

Thurston Moore (Sonic Youth) who I met years ago and, with Kim and his many guitars, was a house guest back in the day. He now lives locally and did a fundraiser for the festival in 2013; the set included an improvised Jazz number with saxophonist Alan Wilkinson. Thurston went on to become more involved, interviewing Viv Albertine about her book ‘Clothes, Music, Boys’ and hosting a William Burroughs event with Barry Miles in 2014.

There’s a lot of debate about how hard it is for new writers to break through, especially from disadvantaged backgrounds and also a strong ethos from the industry that you shouldn’t write for free. Hackney has the lowest literacy rates in the country, and large communities for whom English is a second language. SNLF is very much an urban, inner city festival – how does this come out in the mix?’

The festival raises funds for literacy initiatives and is in the process of formally establishing a charity to further this work. Projects we’ve run in past years include Elif Shafak teaching creative writing to young Turkish women in the local school and a local Hackney teenage writer has been funded to attend a writers’ programme at the Arvon Foundation. The Festival has always been characterized by Politics, Feminism, London, especially local London history, and Music

Yes there is always been musical content in the festival programme, I remember that Edwyn Collins had everyone in tears of joy when he sang ‘Rip it Up’, Wilko Johnson mesmerized us with his choppy guitar, and Viv Albertine did a memorable solo set for the after party one year, but there’s also a whole bill of free gigs in the Budvar Beer tent isn’t there?

The idea of the tent is the give people a place to go in between events and a place to enjoy some free entertainment. There are live performances on throughout the weekend – poets and musicians and comedians. Of course selling booze helps to fund the festival. Some people spend their whole weekend out in the there!

Who’s going to be there this year?

Tjinder Singh (Cornershop) has published a picture book based on his song ‘What did the hippy have in his bag?’ He’s doing a Music Box Workshop event around the book – it is family friendly!

Stoke Newington has a proud dissenting history; it has always been home to artists, musicians and alternative religions. In the time that you’ve lived here the area has changed a lot, the arrival of Foxtons was a low point, but the Literary Festival celebrates local figures from the past such as Mary Wollstonecraft, Anna Barbauld, Edgar Allen Poe. Who’s dissenting this year?

Will Self, Will Hutton, Owen Jones, Lynne Segal and, musically, the Chorus of Dissent.

No. It is in my past. It was a great time, and we’re all friends. We learnt a lot as we progressed.

You feature on several pages of Morrissey’s autobiography; he describes you and Jon Savage as ‘a magnificent whirlpool of words’. You’ve recently gone part-time for Hackney libraries, which must have freed you up to devote more time to SNLF, are you also allocating time for your own autobiography?

There are whisperings in my ear but at present I have no firm plans to write a memoir.

Richard Boon will be appearing at Louder Than Words Festival later this year. He is on twitter at @booniepops