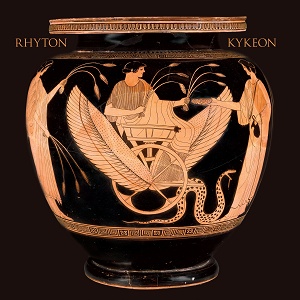 David Shuford (No Neck Blues Band), Jimy SeiTang (Stygian Stride) and Rob Smith (Pigeons) make up the trio who have previously given us improvised albums and now present six tracks which have been arranged and formed rather nicely.

Taking influences from the Middle East and Greece they have fused them with elements of 60s and 70s rock and created some interesting, if not very enjoyable compositions.

Opening with Siren In Byblos, high pitched effects sounding like the old internet dial up tone are mixed with theremin sounding noises before calm enters in the form of Doors-like organ and gentle drum patterns. It moves along with a 60s psychedelic feel speeding up then slowing down into a dark plodding crawl.

In Greek, ‘kykeon’ has a literal translation of “to stir, to mix” and is therefore an apt name for the album. Also a psychoactive drink invented by the ancients, it’s a fitting title as it’s near hallucinogenic creations twist and spiral inside your head. Topkapi is case in point – cyclic and aspiring, in evokes memories of Ravi Shankar and Beatles ‘trips’ into the unknown.

Gneiss is repetitive and maybe too much so until a midway break appears in the form of a bouzouki which adds a refreshing air to the proceedings.

The opening to Pannychis is Stone Roses-like as the gentle organ and skimming percussion compliment a terrific guitar riff whilst treated vocals gurgle and murmur intermittently. California Black Box Vapors is probably more improvised sounding like a jam session by three young men determined to break their respective instruments in less than four minutes.

Album closer, The Striped Sun brings together a mish-mash of effects, random sounding instruments and electro-saz and sounds amazing.