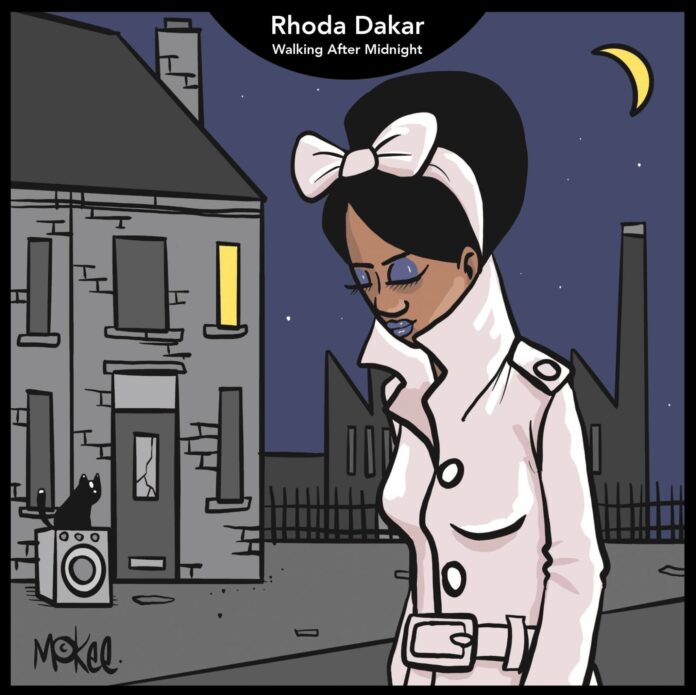 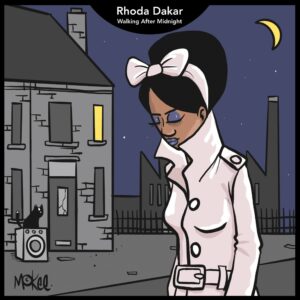 2-Tone and Bodysnatchers vocalist’s Ska version of song made famous by Patsy Cline – the latest in a batch of wonderful cover versions from newly installed ‘goddam national treasure!’ Rhoda Dakar.

“Dedicated to the memory of all the women who were only walking home or anywhere else, but never made it.”          Rhoda Dakar London, November 2021

This single should be all over the radio and a massive hit if there was any justice in this crazy mixed up world. It’s old-fashioned but brand new. Utterly timeless, completely charming and has an effortlessly stylish air to it.

Originally recorded by Patsy Cline (written by Alan Block and Donn Hecht), ‘Walking After Midnight’ is considered one of the greatest songs of Country music. Although widely covered, it has never received the Ska treatment. Until now.

As with Rhoda’s previous two Sunday Best singles (the first being a cover of ‘Everyday Is Like Sunday’ the second ‘The Man Who Sold the World‘), Rhoda and her band recreate the classic sound of Jamaican Ska pioneered by drummer Marley great grandfather, trombonist Don Drummond. A flowing bassline, rhythmic guitar and keyboards and buoyant brass accompany an outstanding vocal performance and superb backing vocals and harmonies. The b-side is a ‘Midnight Skank’ version of the track featuring MC Natty Campbell.

“I was introduced to Country music through Elvis Costello’s Almost Blue album,” Rhoda says of the roots of her discovery of the song. “I loved ‘Sweet Dreams’ and once I heard Patsy Cline’s version I was hooked. Even my kids used to request ‘Crazy’ in the car. After Sarah Everard’s murder ‘Walking After Midnight’ was the first tune that came to mind, especially as I, too, had taken to walking around after dark during lockdown. Somehow it felt safer. It seems the predators felt so too.”

The video made by Dean Hennessy of We Film Reality has a lighter vibe with two lovers walking the cold, wet streets of a small town looking for each other.

The male actor is an old acquaintance of mine, Swannie, who back in the early 80’s was Salisbury’s ‘Ace Face’, the coolest mod in the Wiltshire city. It’s a local urban myth that he was beaten to the role Sting played in Quadrophenia, but he certainly looked the part. Later he played in indie contenders the Mayfields whose retrospective album LTW reviewed here. I never knew he did a bit of acting on the side and it was a nice surprise to see him get a starring role.

The ‘everytown’ location is the beautifully lit rainy streets of Salisbury where I spent my teenage years. They don’t seem to have changed much in forty years and I recognise every street, pavement and subway. Every one holding a bittersweet teenage memory.

To the wider world, that idyllic walk where the ‘weeping willow’ hang over the stream behind the old Tesco and library is the place where in 2018 the Skirpals fell ill and sat on a bench after being poisoned by the Novichok nerve agent that was of course nothing to do with Putin.  You couldn’t get a more peaceful place in small-town England.

It’s a great video – despite the emotional resonance it holds for any former residents of the town – and compliments the beauty of the song and Rhoda’s distinctive and faultless vocal.

There’s a new album to come from Louder than Wars favourite 2-Tone Queen and National Treasure before the end of the year.